Home / National / Canadian dairies fret impact of US milk
A new user experience is coming! We'll be asking you to login to your Morning Ag Clips account March 1st to access these new features.
We can't wait to share them with you! Read more here. 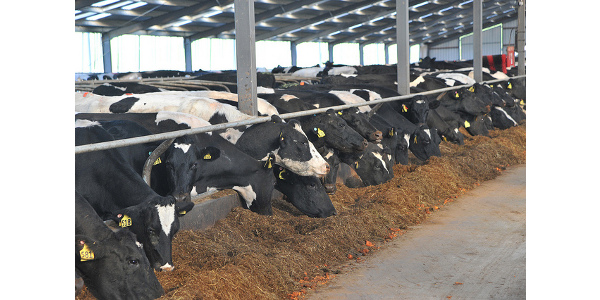 Canadian dairy operates under a supply management system, in which farmers are protected from competition because the government blocks out foreign production with high tariffs and sets quotas to limit production and prevent market saturation. With traditional market forces removed, the government decides how much farmers are paid for their production, helping to keep farmers' incomes stable. (US Embassy via Flickr)

MONTREAL — Nearly 1,000 kilometres from Washington, where a team of top Canadian negotiators sit in 11th-hour NAFTA discussions, Peter Strebel works under a cloud of concern at the rural Quebec dairy farm his father founded in 1976.

The Quebec milk producer is worried that rumblings that Canada may sacrifice part of the sacred cow of supply management as a concession in trade negotiations with the United States would “punish” the dairy industry, open the floodgates to American milk products and prompt thousands of farm closures north of the border.

“There would be lots of bankruptcies … It would be devastating,” he said from his farm south of Montreal.

“We’ll probably have to cut back on investment, maybe lay off a couple workers. I don’t know how it would be done.”

Canadian dairy operates under a supply management system, in which farmers are protected from competition because the government blocks out foreign production with high tariffs and sets quotas to limit production and prevent market saturation. With traditional market forces removed, the government decides how much farmers are paid for their production, helping to keep farmers’ incomes stable.

The protectionist policy, a staple of Canadian agriculture for more than 40 years, has come under periodic attack from U.S. President Donald Trump.

And as trade talks hit a fever pitch ahead of a pending Friday deadline, Strebel and others fear that the Canadian government is ready to make concessions on dairy.

More than 15 per cent of the Canadian dairy market is already opening up to imports under terms of the Trans-Pacific Partnership signed in March. Any further dents to supply-side protection would imperil the business, said Strebel, who represents his region on the board of the Milk Producers of Quebec.

Strebel’s 150 cows churn out 5,000 litres of milk per day, which is trucked off to 115 processing facilities — waypoints on the path to products ranging from Yoplait yogurt to local cheese.

Several potential concessions are of particular concern to him and Canada’s 11,000 dairy producers, the vast majority of whom are located in Quebec and Ontario.

But the head of the Dairy Farmers of Ontario believes scrapping Class 7 would be detrimental to the Canadian industry.

“Either we’d try to get less capital cost per unit of milk shipped and try and live that way, or go broke — or just try to ride it out for a few more years and then quit,” said Ralph Dietrich, who chairs the advocacy group and co-owns a dairy farm in southwestern Ontario.

Should supply management suffer a blow at the trade table, Strebel wondered if Canada would compensate with hundreds of millions of dollars in subsidies, or rethink its ban on bovine growth hormone for dairy cows, which the U.S. allows as a means to boost milk production.

Robert Wolfe, a professor emeritus at Queen’s University who specializes in agriculture trade policy, pointed to the possibility of devalued quotas. Much like the medallion system that regulates the number of taxi drivers, quotas mean a farmer has the right to produce a certain amount of the product.

“That quota is the right to sell a certain amount of milk. But if anybody can sell milk, then that quota that you’ve spent a lot of money on is worthless,” he said. “For the typical dairy farmer, we’re talking millions.”

“There are some farmers that have reinvested in facilities and expanded in more efficient facilities, but are relatively new and financially leveraged who could have a great deal of difficulty in that environment because they’ve lost some of their ability to generate revenue,” Mussell said.

However, supply management is also one of the few cards the Trudeau government has left to play at the bargaining table after the U.S. and Mexico reached their own side deal on Monday.

Defending dairy farmers, who enjoy artificially high prices and exorbitant incomes, threatens to hurt the steel, aluminum and automotive industries during trade negotiations unless concessions are made, said Martha Hall Findlay, president and chief executive of the Canada West Foundation.

“Why are we sacrificing those sectors, those jobs, those Canadians, for a small number of now wealthy producers?” she wrote in a paper released Wednesday.

Findlay called on Ottawa to dismantle supply management, “not because Trump says so, but because it’s in Canada’s best interests.”

Companies in this story: (TSX:SAP)

— Christopher Reynolds, The Canadian Press via The Associated Press