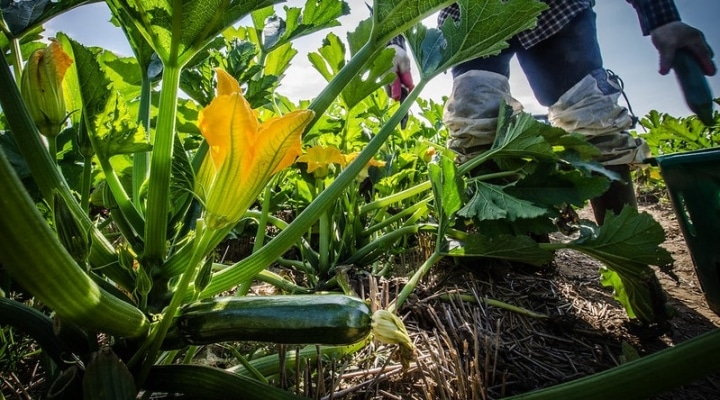 Mexicans make up about half of the temporary foreign worker population employed in the Canadian agriculture sector, which in 2018 meant there were 25,060 people employed on farms, in greenhouses and other related jobs. (Stock photo via U.S. Department of Agriculture, Public Domain)

OTTAWA, Canada — Mexico won’t send any more temporary foreign workers to Canada until it has more clarity on why two died due to COVID-19, the country’s ambassador to Canada said Monday.

That means as many as 5,000 temporary foreign workers expected to arrive in Canada in the coming months are being held back, for now.

“It’s so we can reassess with the federal authorities, provinces and farmers why this happened and if there is anything to correct,” Juan Jose Gomez Camacho said in an interview.

The two men — one died this month and the other in late May — were employed by different farms in the Windsor, Ont., area, a farming heartland in southwestern Ontario that has seen ongoing outbreaks.

The outbreaks were cited Monday as the reason Ontario Premier Doug Ford said the region can’t follow in the footsteps of others and loosen restrictions designed to slow the spread of COVID-19.

Ford was quick to say people shouldn’t blame the workers.

“They came here, they self-isolated for two weeks and they picked it up since they’ve been here,” he said.

“So I don’t want any finger pointing at these hard-working migrant workers. They’re good people, they mean well, and they’re hard workers too.”

Gomez Camacho said across Canada, 300 Mexicans are believed to have been infected with the novel coronavirus.

His government needs assurances that the situation can be brought under control, he said, before allowing more workers to arrive.

He said agriculture firms reporting outbreaks are even asking Mexico to keep sending people, and “that will not happen.”

But he said the pause is intended to be temporary, respecting the fact that farmers often need workers at specific times, and the government isn’t trying to spoil that.

“We are pausing this quickly now to understand,” he said.

The decision to hit pause is a further blow to the agriculture industry which has been struggling to find enough labour to handle this year’s planting and harvest season, due in large part to the travel restrictions in place to slow the spread of COVID-19.

Mexicans make up about half of the temporary foreign worker population employed in the Canadian agriculture sector, which in 2018 meant there were 25,060 people employed on farms, in greenhouses and other related jobs.

The dizzying array of government departments charged with ensuring workers are being treated well is difficult to navigate at the best of times, and COVID-19 threw up even more challenges, Gomez Camacho said.

But he commended the Canadian government for making what he called a “tremendous” effort to put protections in place to limit the spread of COVID-19.

Programs have been implemented at both federal and provincial levels to assist temporary foreign workers since the early days of the COVID-19 pandemic. They include money to cover the costs of mandatory isolation requirements as well as the purchase of personal protective equipment.

Gomez Camacho said the Mexican government worked with Canadian officials to design some of those supports, including a provision that workers be paid while they were in isolation upon arriving in Canada.

The vast majority of firms are complying, he said.

“But we also know, we have always known, some will not,” he said.

On his government’s part, they also put in a place a program this year that saw only workers who were requested by name by Canada’s farms and greenhouses allowed to travel here.

He said many workers are connected to small family farms, and have developed relationships over time.

The pause on allowing more to arrive is a nod to that relationship, he said.

“We are doing this out of solidarity with Canada,” he said.”We understand the role these workers play in your food chain.”

Gomez Camacho said one bright light of the COVID-19 crisis is that Canadians seem to be understanding that as well.

He said the embassy and consulates have fielded calls from Canadians thanking Mexicans for their efforts, and supporting calls for better safeguards on their work.

The Liberals engage regularly with Mexican officials, the statement said, citing recent calls between other cabinet ministers whose files include the foreign worker program and their Mexican counterparts.

Prime Minister Justin Trudeau also spoke Monday to Mexican President Lopez Obrador and expressed his condolences over the death of the two men, the statement said.

“Our government will continue to engage and work closely with the ambassador and other Mexican officials to ensure their citizens are safe and receive the support they need when they come to work in Canada,” the statement said.

This report by The Canadian Press was first published June 15, 2020.