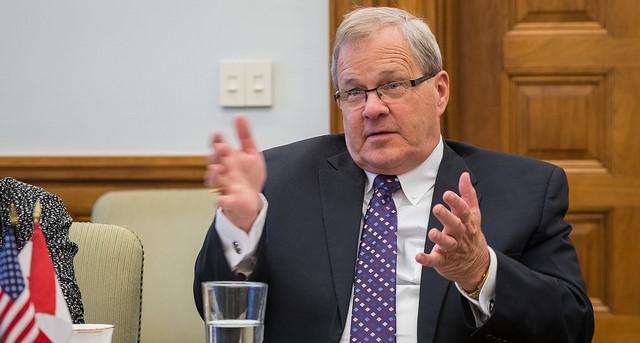 Transport Minister Marc Garneau and Agriculture Minister Lawrence MacAulay have written jointly to Canadian National and Canadian Pacific to express their "serious concerns" about the failure of the railways. (U.S. Department of Agriculture, Flickr/Creative Commons)

OTTAWA — The Trudeau government is putting pressure on Canada’s two major railways to clear a growing backlog of grain shipments that is undermining the country’s reputation as a reliable exporter and putting farmers in a cash-flow crunch.

Transport Minister Marc Garneau and Agriculture Minister Lawrence MacAulay have written jointly to Canadian National and Canadian Pacific to express their “serious concerns” about the failure of the railways to meet the expectations of shippers and customers over the winter.

The two ministers say they understand that the railways have faced challenges due to a larger than expected grain crop last year and extreme winter weather.

Nevertheless, they call the railways’ performance “disappointing” and ask them to take further action.

Specifically, the ministers request that the two federally regulated companies publicly provide a clear description of how they intend to clear the backlog and their plans for maintaining the fluidity of shipments going forward once the backlog is eliminated.

They give the companies until March 15 to publish the information on their websites.

The ministers say the lack of reliability in moving goods by rail is a problem that’s most acute for grain farmers, “who need to deliver their grain in order to secure cash flow to pay off past loans and purchase inputs for the upcoming crop year.”

However, they point out that the problem goes well beyond farmers.

“Over the course of the winter, we have heard concerns from shippers in a variety of sectors who are experiencing severe challenges due to rail service and capacity issues,” the ministers write in the letter, sent Tuesday to the presidents of CN and CP.

“For example, forestry, energy and chemicals shippers have indicated that they have lost significant business and opportunities due to the inability to move their products in a timely and efficient way. Canada’s international reputation as a reliable supplier is at stake.”

The letter comes one day after CN dumped its president, Luc Jobin, in the midst of growing complaints from western farmers about the backlog of grain shipments. Veteran CN employee Jean-Jacques Ruest was named interim president.

And it comes one day before an emergency meeting of the House of Commons transport committee is scheduled to explore the backlog problem.

According to the Ag Transport Coalition, the two railways combined provided only 38 per cent of the rail cars ordered by grain shippers during the week of Feb. 12 — CP delivered 66 per cent of the cars, while CN delivered just 17 per cent.

Opposition parties have been pushing the government to order the railways to supply more cars for grain shipments. But government officials argue that it’s not that simple; any increase in cars for grain means shortchanging the number of cars available for other products, which are facing shipment delays of their own.

Various organizations representing grain growers have argued that at least part of the solution is the passage of Bill C-49. The legislation would, among other things, financially penalize railways that fail to deliver promised rail cars on time. However, that bill has been stalled in the Senate since the fall.

Nevertheless, Garneau and MacAulay advise the railways that they should already be preparing to meet the new requirements that the legislation will eventually impose once enacted.

“We expect railways to undertake robust planning exercises to develop these reports, in collaboration with shippers and producers,” they say in the letter.

“These reports will improve transparency in the rail transportation network, enabling supply chain partners to plan their operations accordingly and helping to reduce the kind of challenges that have arisen this year.”