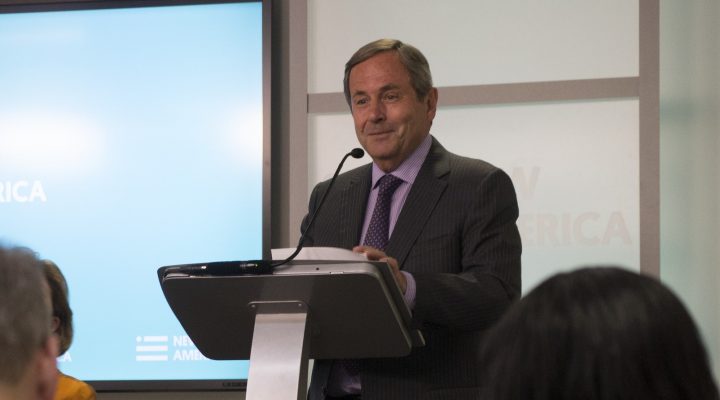 Canada's ambassador to the U.S., David MacNaughton, expressed his desire to see the countries propose common-ground, common-sense ideas that improve the old agreement instead of flinging out hardball demands that could produce deep, drama-filled bargaining. (New America, Flickr/Creative Commons)

WASHINGTON — The Canadian government is signalling the approach it intends to take should Donald Trump make good on his promise to renegotiate the North American Free Trade Agreement.

Canada’s ambassador to the U.S. is laying out some starting principles such as co-operation instead of confrontation.

In a lengthy interview, David MacNaughton expressed his desire to see the countries propose common-ground, common-sense ideas that improve the old agreement instead of flinging out hardball demands that could produce deep, drama-filled bargaining.

“We have done an extensive amount of work (to prepare for this),” MacNaughton said in the year-end interview. “We have a good sense of what would be in Canada’s interest….

“(But) the areas we need to focus on - and I think we are focusing on – is where is it not just in Canada’s interest, but in Canada and the United States’ interest…

“I think if we’re just blatantly trying to push something that works for us but doesn’t work for them, that’s not going to be… quite as easy.”

They include the incoming president’s vow to fight certain tax policies of other countries; his preference for Buy American restrictions on infrastructure projects; the ongoing softwood lumber dispute; and increasing anger from U.S. dairy producers over Canadian import restrictions.

Aware of the irritants that could erupt in 2017, the Canadian government has already begun reaching out to potential U.S. allies to bolster its public advocacy on some of these issues including Buy American.

But the government wants to avoid having irritants inject uncertainty into discussions about the trade treaty that governs the region where Canada sells more than three-quarters of its exports.

MacNaughton wouldn’t elaborate on the specific improvements he has in mind, saying he wants to avoid negotiating in public.

He did confirm one potential change: to professional visas.

International businesses have complained about an out-of-date visa system that creates unnecessary red tape when employees travel across the border for work. When asked about visas, MacNaughton confirmed that was the type of mutually beneficial upgrade he favours.

It’s also unclear what the incoming administration actually wants from Canada â Trump almost never mentioned the northern neighbour during the campaign, even as he railed against NAFTA.

MacNaughton said he’s received some encouraging signals about its attitude toward Canada.

He said he’s had positive conversations with people close to Trump, including his pick for attorney-general, Jeff Sessions, and incoming White House chief of staff Reince Priebus, who attended a White House correspondents’ dinner party at the Canadian embassy.

“None of those things apply to Canada,” MacNaughton said.

“I think they see us as pretty much the good guys, rather than the bad guys in terms of trade.”

This raises a question about the other North American amigo: Mexico, which has been a frequent target of Trump’s. That question is, would Canada seek to renegotiate NAFTA as a trilateral block, or cut Mexico loose and try getting a better result by dealing one-on-one with the Americans?

MacNaughton said he couldn’t rule out either possibility: “The reality is that we will do what is in Canada’s interest,” he said. “(But) we don’t have exclusive control over whether or not the Americans want to have trilateral conversations or bilateral conversations.”

As for the upcoming irritants, the Canadians have begun a pre-emptive pushback.

On Buy American, MacNaughton says his team has been talking to the United Steelworkers union which has members in both countries, and whose president is Canadian Leo Gerard, in the hope of getting an exemption for Canadian steel â like the one eventually worked out between Stephen Harper and Barack Obama following the 2009 U.S. stimulus bill.

They’ve warned Americans they’ve talked to that penalizing Canadian steel might threaten co-operation in international forums, where Canada and the U.S. work together to fight product dumping.

“They can’t put up barriers to importation of steel in the United States and expect us to be working with them, hand in glove, to prevent abuses from third countries. So we’ve made that point.”

MacNaughton says the government has already begun warning Americans that conversation risks a slippery slope. He said anything that would increase taxes on Canadian exports would be worrisome, and would hurt U.S. consumers.

“I think the thing that we’ve pointed out to any of them when we’ve talked about this is, ‘I’m not sure that you want to put an import tax on energy.’ I’m not sure U.S. consumers would think very highly of that; same for products that go back and forth across the border more than once. I’m not sure you want to tax that.”

So what does he want to see from the next U.S. administration?

MacNaughton goes right back to the original point: “Make NAFTA work better, rather than throw out the baby with the bathwater.”