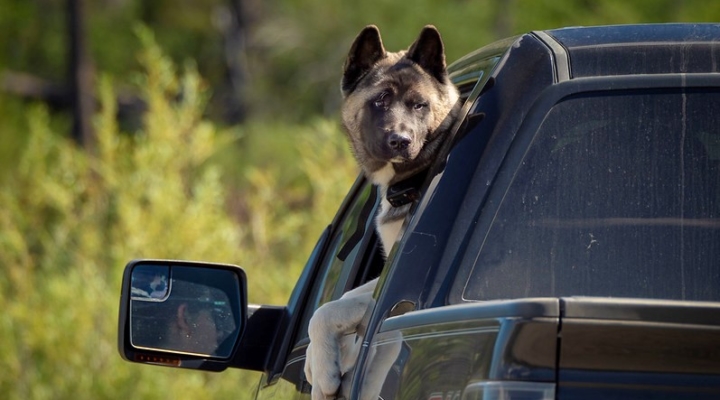 Glen Golden, a research scientist at Colorado State University, was leading this study. He previously trained mice and ferrets to do similar tasks, but he said his greatest interest is in working with dogs. (Stock photo, Forest Service, USDA, Public Domain)

AGERMAN, Idaho (AP) — Dogs, known for their keen sense of smell, can detect things like illicit drugs, invasive species and even if someone is having a stroke. Now a team of researchers from Colorado State University are looking at whether canines may also be able to sense the presence of avian influenza.

Boise State Public Radio reports they recently came to Hagerman to conduct a study with help from the United States Department of Agriculture and Idaho Fish and Game. In the parking lot by a boat launch, the group gathered around what looked like a training course for dogs.

Liz Ramirez, the dog handler, took six dogs down rows of black metal boxes sitting on the ground. At each box, the dogs paused to sniff.

Inside the boxes were waterfowl, most likely mallards, that were donated by local hunters. Odin and the other dogs — all from shelters or rescued — were trained in the lab in Colorado to detect the virus. When they thought they smelled a positive case, they alerted the researchers by pawing at the box.

Glen Golden, a research scientist at Colorado State University, was leading this study. He previously trained mice and ferrets to do similar tasks, but he said his greatest interest is in working with dogs.

“That’s been my goal probably my whole adult life,” he said, “being able to use the odors of disease as a method of detection and diagnosis.”

Golden chose south central Idaho as a study site, in part, because this area was found to have a high detection rate of avian influenza according to the USDA’s surveillance monitoring program.

Scott Stopak, a wildlife disease biologist for the USDA in Boise, said bringing along dogs to duck hunts or other sites where birds are typically collected for sampling could mean they learn about outbreaks earlier.

“Say we detect a disease, then we can go and do enhanced surveillance there to see how widespread it is,” Stopak said.

And Idaho would be able to warn other locations further along the Pacific Flyway about potential outbreaks. Stopak also said using dogs could cut down on monitoring costs because they could better target which samples get sent to labs, which can be expensive.

Stopak and Golden both see this research as a step toward even more advanced detection science to come. Stopak said dogs might be able to alert biologists of chronic wasting disease, too, which is a growing problem in the West. Eventually, computers and machines night replace animals as the best olfactory sensors, Golden said.

Golden will take the results from the testing in Hagerman back to Colorado and will compare how the dogs performed against the official lab results, indicating whether the waterfowl in the boxes were infected by avian influenza. Then, he’ll know how accurate the dogs were and how to train them better.

How is cow health, comfort and productivity related to diet and environmental conditions?
October 19, 2021