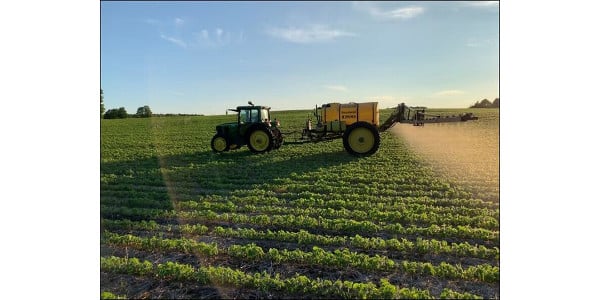 EAST LANSING, Mich. — In 2019, Michigan State University Extension trialed DeerProSpring & Summer and Plantskydddeer repellent products on two production soybean fields in northeast Lower Michigan (Metz, Michigan) and the south-central Upper Peninsula (Cooks, Michigan). Damage to soybeans by white-tailed deer depredation is a common problem in these areas of the state. Research conducted in the region by MSU Extension in 2015 recorded early-season defoliation in soybeans ranging from 0 to 87.5%. Deer browsing significantly reduced soybean yields that year. Yield loss at the field scale ranged from 0 to 100%, averaging 10% or 3.89 bushels per acre. In these fields with the highest levels of depredation, chemical repellents may have potential as a solution to remedy crop damage.

Our study in 2019 builds upon two previous years of research testing deer repellent products in soybeans. In 2017 and 2018, MSU Extension Presque Isle County trialed DeerPro Spring & Summer as a means of reducing deer depredation of soybean. In 2017, the treatment significantly reduced depredation and yield loss at one location but failed to do so at a second location. In 2018, an early application of DeerPro Spring & Summer was paired with a later application of DeerPro Winter, a contact repellent containing thiram. This two-product program did not perform as well).

In 2018, commercial soybean and dry bean growers in northeast Lower Michigan and the Garden Peninsula began experimenting with Plantskydd. Growers reported success using Plantskydd to reduce deer damage in beans, which encouraged us to include it as a research treatment for the first time in 2019.

Fields for this year’s trial were selected based on landscape factors known to increase the likelihood of deer damage (forested field edges) and a history of significant deer damage as reported by the cooperating growers. At the Cooks location, MG 0.9 soybeans were planted in 30-inch rows at 110,000 seeds per acre on May 25, 2019. Plots 80 feet wide by 300 feet long were established running perpendicular to the south field edge shortly after planting (Fig. 1).

Plot width was determined by the width of the cooperating farmer’s sprayer boom. Two 4 feet by 4 feet by 5 feet tall exclusion cages constructed of steel fence posts and Tenax C flex plastic mesh fencing were placed in each plot, one being 50 feet from the field edge and another 150 feet from the field edge, to measure soybean development and yield potential with zero deer pressure (Fig. 3).

Deer damage was monitored from V1 until the V6/R1 growth stage, after which damage is thought to be less detrimental to yield. Our primary method was hand counting the number of plants damaged and percent defoliation relative to undamaged plants in 17.4 feet of row (Metz) or a ¼ m2 PVC quadrat (Cooks) at four random locations per plot every six to 10 days (Fig. 4). Counting began on June 17 in Metz and June 18 in Cooks, continuing for seven weeks.

At crop maturity, two methods were used to measure soybean yield on Oct. 20 in Cooks and Nov. 18 in Metz. The first method was to harvest soybeans within each exclusion cage. Beans were hand harvested from the cages, threshed using a stationary plot thresher and weighed. After the exclusion samples were harvested and cages removed, a strip was harvested from each plot using the cooperating grower’s combine and weighed using a weigh wagon to determine average plot yield. All yield data was adjusted for grain moisture at harvest.

Deer pressure and soybean defoliation were generally low at Cooks until July 11. Both the DeerPro and Plantskydd repellent treatments significantly reduced soybean defoliation by 71% and 66%, respectively, at seven, 10 and 20 days after the second application at Cooks (P < 0.10) (Fig. 5). However, soybean yield was not significantly different between treatments within the exclosure cages or in the exposed plots at Cooks. The difference in soybean yield between exclosure cages and exposed plots was also not significantly different between treatments at Cooks (Fig. 6).

Our data suggest that neither the DeerPro nor Plantskydd repellent products were able to control deer depredation to the point of significantly protecting soybean yield. This finding was somewhat unexpected at Cooks based on the significantly lower amount of early season defoliation in treated plots. However, a great deal of late season pod feeding was observed at Cooks, which we would not expect to be affected by early season repellent applications to vegetative tissue.

This is not the first year that late season pod feeding has reduced soybean yields in our trials, regardless of repellent efficacy early in the season. This suggests that late season control tools are needed to better protect yield. Yet, the economic cost of a third or fourth repellent application could outweigh the value of yield preserved in a commodity crop like soybeans.

Deer damage began earlier and increased more rapidly at Metz relative to Cooks, appearing to quickly overwhelm the repellent treatments. White-tailed deer density is significantly higher at Metz than in Cooks, which likely explains the poor performance of our repellent treatments at Metz. It is also interesting to note the possibility that previous use of DeerPro repellents at the Metz site in 2017 may have contributed to habituation in the local deer herd and reduced efficacy, although we have no data to support this conclusion. If that were the case, one would expect that the novel repellent product Plantskydd may still be effective.

The authors would like to thank Great Oak Inc. and Tree World Plant Care Products, Inc. for supporting this research, and the Brandt and Robere families for their time and effort in conducting the trials.