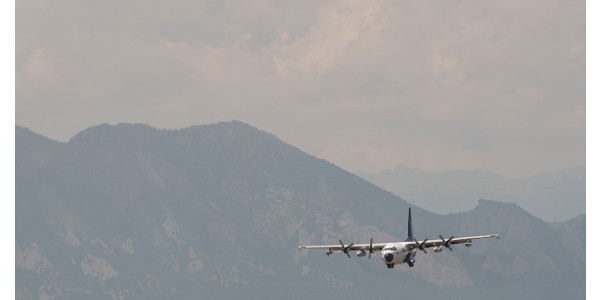 FORT COLLINS, Colo. — This summer, a four-engine cargo airplane laden with both scientists and sophisticated equipment will fly straight into hazy smoke from Western wildfires.

The flights will comprise the largest, most comprehensive attempt to date to measure and analyze the wildfire smoke that blankets vast swaths of the United States every year.

Throughout late July and August, a multi-agency, multidisciplinary team led by Colorado State University scientists will travel to Boise, Idaho, to conduct 15 to 20 smoke-observation flights. The project is called the Western Wildfire Experiment for Cloud Chemistry, Aerosol Absorption and Nitrogen, or WE-CAN, and is primarily supported by the National Science Foundation.

“This is a challenging field campaign,” said lead scientist Emily Fischer, CSU assistant professor of atmospheric science. “It’s not like measuring the plume from, say, a power plant. We don’t know exactly where the fires will be, but we know that pretty much every year, there is a wildfire burning within a two-hour flight of Boise during the month of August.”

The project brings together scientists from five universities and the NSF-funded National Center for Atmospheric Research, with partial support from the National Oceanic and Atmospheric Administration and NASA. The goal is a comprehensive, systematic understanding of the chemistry of wildfire smoke.

The researchers will answer such questions as: What is the smoke made of? How does it change over time, and as it travels? How does it affect clouds? How does the type and growth of the forest affect the composition of smoke produced? How does the smoke chemistry of hot-burning fires compare with lower-temperature, smoldering fires?

Answering these and other questions has major ramifications for downstream studies of air quality, health, nutrient cycles, weather and climate. The WE-CAN researchers hope to contribute to science in all these areas with the data they’ll collect this summer.

“We’re following the transport and transformation of the plume of gases and aerosols emitted by wildfires to understand the chemical changes they undergo over time, how their properties might vary, and what their impacts are on human health and the environment,” said Sylvia Edgerton, program director in the NSF Division of Atmospheric and Geospace Sciences, which funds WE-CAN.

The research team is focused on three sets of scientific questions related to wildfire smoke: Increasing the understanding of the amount and types of reactive nitrogen in smoke plumes; quantifying and understanding emissions and evolution of fine particulate matter and optical properties of the smoke; and identifying how smoke plume particles affect the behavior and formation of liquid and ice clouds.

The size and diversity of the team reflects the scope of scientific questions they will explore. Fischer’s expertise is in reactive nitrogen and ozone, and her group will lead measurement of atmospheric ammonia. Shane Murphy of the University of Wyoming will head the investigation into absorbing aerosols. Experts from CSU including Paul DeMott and Amy Sullivan will explore smoke particles and their effects on clouds.

The WE-CAN campaign goes above and beyond other wildfire-related air-quality experiments conducted in the past. Fischer explains that previous atmospheric field campaigns intersected wildfire smoke, but have not been their main focus.

“What we are doing in WE-CAN is much more systematic,” Fischer said. “We will start as close as we can to the fires, and track the smoke for 12 to 24 hours of atmospheric aging. That’s when a lot of the chemical evolution happens. We have very few existing samples of this evolution in the atmosphere.”

The C-130 research aircraft is owned by the NSF and maintained and operated by the NCAR Earth Observing Laboratory. It makes its home in Broomfield, Colorado, at Rocky Mountain Metropolitan Airport. In the weeks leading up to the Boise flights, the science team gathered in Colorado to test the plane and instrumentation.

The aircraft will carry close to 30 scientific instruments, with room for 18 scientists to fly. Many others will be on the ground, helping monitor fires, smoke and weather to guide the plane to prime data-collecting zones. They will conduct two types of flight patterns within six-hour flights, multiple times over six to eight weeks.

After the field campaign wraps up, Fischer and other collaborators will teach a two-week aircraft observations class in early September for students from several universities including CSU, the University of Wyoming, North Carolina Agricultural and Technical State University, and the University of Montana. The students will learn the ins and outs of aircraft-based atmospheric science, making their own decisions about where to fly the plane and when.

In summer 2019, a related experiment, FIREX-AQ, will be led by NOAA and NASA scientists, with some overlapping as well as complementary scientific goals with WE-CAN. The 2019 campaign aboard the NASA DC-8 aircraft will be based in Idaho and Kansas, and will sample nighttime smoke, as well as urban-smoke interactions.

Both WE-CAN and next year’s NOAA-NASA flights will further complement groundbreaking wildfire smoke studies undertaken in the Fire Influence on Regional and Global Environments Experiment. FIREX was a primarily laboratory-based wildfire smoke experiment, also led by NOAA, and involved scientists from several institutions.

Delphine Farmer of the CSU Department of Chemistry and Sonia Kreidenweis of the CSU Department of Atmospheric Science are also members of the WE-CAN principal investigator team, and are supported by NOAA. CSU atmospheric scientist Russ Schumacher will assist the team with weather forecasting for optimal flight times. The team will also partner with the U.S. Forest Service to understand which fuels burned during their flights.