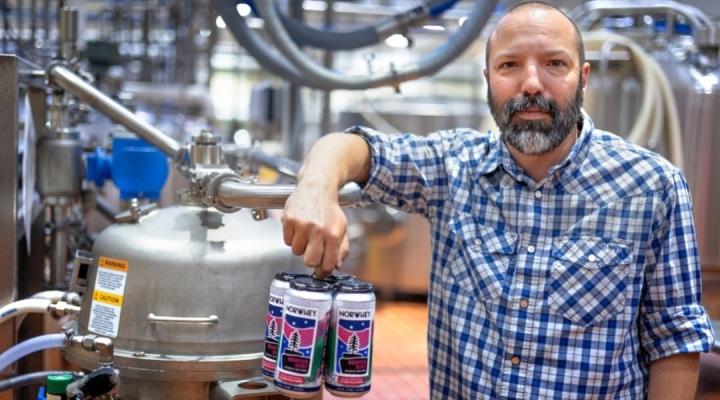 ITHACA, N.Y. — Food scientist Sam Alcaine, M.S. ’07, never dreamed of becoming a business owner – but earlier this year that changed when he launched a hard seltzer brand, Norwhey, made from yogurt whey.

“It’s light, tart, with a little bit of fruitiness, depending on the flavor,” Alcaine said, “between a tart seltzer and a sour beer.”

The brand is a triple threat: it’s an alcoholic beverage with a better nutritional profile, it’s made from material that would otherwise go to waste – and it could eventually act as a model for dairy farmers looking for additional revenue.

“It feels great to be able to see the arc of an academic research project that is really making that crossover to the real world,” said Alcaine, associate professor of food science in the College of Agriculture and Life Sciences.

The road to Norwhey began in 2016 when the New York Department of Environmental Conservation (NYDEC) asked Cornell to solve a problem. As the largest producer of yogurt in the country, how could New York deal with all the waste?

On average, every one cup of yogurt also creates an additional three cups of yogurt whey byproduct. It causes environmental damage if dumped into waterways – so producers must pay to get rid of it.

“Essentially, you’re taking 75% of the milk, and all the work that went into that milk is being thrown away,” Alcaine said. “That’s lost resources and value. So how do we recapture that and turn it into something valuable?”

Historically yogurt whey has been considered worthless due to its lack of protein. But it does have the majority of milk’s vitamins, minerals and electrolytes, including calcium, potassium, zinc, magnesium and vitamin B5. The health benefits of the byproduct sparked an idea for Alcaine.

As an expert in fermentation and dairy microbiology, and a former employee at Miller Brewing Company, he immediately thought of beer. He wanted to convert the whey’s sugar into alcohol, and produce a brew for health-conscious consumers.

“In the brewing world, we’ve always looked for developing better-for-you products,” Alcaine said. “It’s been kind of a hard space to play in, with alcohol. So this is an opportunity. We just have to make it taste good.”

Initially he began researching the microorganism Brettanomyces, a yeast found in some wines, kombuchas and Belgian beers. Some species can utilize lactose, but had never been investigated in dairy fermentations. This garnered him funding from the NYDEC, the New York State Dairy Promotion Order Advisory Board and the U.S. Department of Agriculture.

Alcaine realized his research could become a retail product, and conceptualized Norwhey, a Nordic-inspired hard seltzer.

“There are actually some old stories around that, in Iceland, they would take the whey from skyr [a cultured dairy product similar to curd cheese] and they would put it into these barrels,” Alcaine said. “It would age and it would become alcohol. But it hadn’t been done in my lifetime.”

While the Brettanomyces research wasn’t utilized in the commercial product, that initial work proved that there was a potential for whey-based products like Norwhey. The product is made by adding the enzyme lactase to the whey, which breaks lactose into glucose and galactose. Those sugars are then fermented by traditional methods.

In 2020 Alcaine partnered with Trystan Sandvoss, the founder of First Light Creamery and then Marketing Director at Old Chatham Creamery. That year the pair entered Grow-NY, a food and agriculture competition, and made it to the final round. Later in 2020 the team won $50,000 at the FuzeHub Commercialization Competition.

Alcaine hopes the business will offer a template for other small producers and will make whey a tool to create more resilient rural communities – and a more sustainable yogurt industry.

“In the long term, my goal is not to be a business owner. I’m a professor and a researcher,” Alcaine said. “But I needed to show the way, with the hope that people will copy us and build a whey-based economy in New York.”