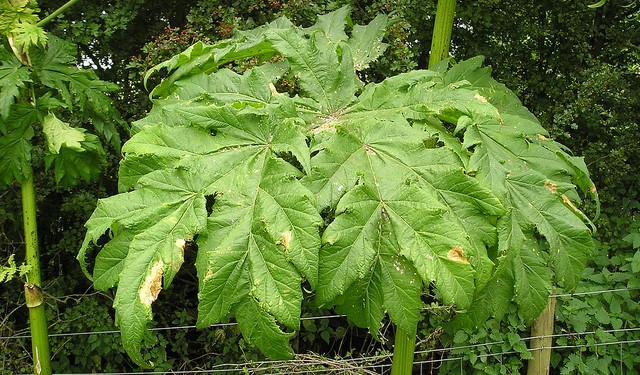 Giant Hogweed is a threat to public health and safety and to the natural ecosystems in New York State. (john shortland, Flickr/Creative Commons)

WATKINS GLEN, N.Y. — Standing at Clute Memorial Park in Watkins Glen, New York, U.S. Senate Minority Leader Charles E. Schumer recently called on the United States Department of Agriculture (USDA) to immediately increase federal investment towards eradication of Giant Hogweed in New York State, while providing technical expertise and resources towards educating residents about the toxic and harmful invasive plant. Schumer explained that Giant Hogweed is an invasive species that presents major health risks such as blistering burns and blindness to people that come in contact with the weed. Schumer said that this particular invasive is spreading through Schuyler County and across the Southern Tier. Schumer also urged USDA to use their world-class technical expertise and resources to help local officials educate and warn New Yorkers of the public health and environmental risks posed by Giant Hogweed.

“Giant Hogweed is a dangerous invasive plant that is quickly spreading here in Schuyler County and throughout the Southern Tier. The feds must direct all available resources to not only stopping the spread of this invasive species in our state, but educating locals as to the human health and environmental risks this invasive plant poses,” said Senator Schumer. “First and foremost, we must slow the spread of Giant Hogweed, and second, we must accelerate the spread of information regarding the public health, environmental and safety risks it creates. New Yorkers need to be aware of how to identify it and where to call it in to so that the correct authorities can eradicate it. This will protect those who work, play, or vacation outdoors, ensure that tourism dollars continue to flow into the region’s economy and protect New York’s pristine outdoor spaces for years to come.”

Schumer specifically called on the United States Department of Agriculture (USDA) to prioritize its research, monitoring, and eradication activities on noxious weeds to give greater emphasis to Giant Hogweed as soon as possible. Additionally, Schumer urged the USDA to provide sufficient funding and resources to bolster ongoing work with New York State to manage and eradicate Giant Hogweed. Schumer applauded the work that USDA has done in conjunction with the New York State Department of Environmental Conservation (NYSDEC) to help contain the spread of Giant Hogweed up to this point, but urged the agency to prioritize the allocation of resources and technical expertise to help expand public education and awareness of the myriad risks posed by Giant Hogweed.

Schumer explained that in recent years, Giant Hogweed has run rampant throughout Upstate New York, and more specifically, throughout the Southern Tier. Schumer said that according to the NYSDEC, there were only 497 active Giant Hogweed sites across New York State after the 2008 field season. Schumer said that according to that same report, after the 2017 field season, the number of active Giant Hogweed sites had spiked, coming out to a total of 1,753 across New York State. Schumer also said that in Schuyler County, there are currently a total of 33 sites with Giant Hogweed plants, and in the neighboring Steuben County, there are 136 sites. Schumer explained that Schuyler and Steuben Counties are among the hardest hit counties by this invasive weed, with Steuben County ranking 3rd in total number of sites, and 1st in the number of sites with over 1,000 recorded Giant Hogweed plants.

The senator said that Giant Hogweed, formally known as Heracleum mantegazzianum, is native to the Caucasus Mountain Region between the Black and Caspian Seas, but has become established in the New England, Mid-Atlantic, and Northwest regions. Schumer added that Giant Hogweed poses environmental threats to New York by crowding out native species and producing toxic sap. Schumer explained that Giant Hogweed has been detected statewide, and is most prevalent in Central and Western New York.

A copy of Schumer’s letter to the Department of Agriculture appears below:

I write to alert the United States Department of Agriculture (USDA) to an issue that could have devastating consequences in New York State, both to the health of our citizens and to the balance of the natural environment, if left unchecked. I have learned that the invasive species Heracleum mantegazzianum, commonly known as Giant Hogweed, is causing much damage as it spreads across multiple counties in the Southern Tier and throughout upstate New York generally. It is critical that USDA increase its research, monitoring, and eradication activities on noxious weeds to give greater emphasis to Giant Hogweed as soon as possible. Further, the Department should provide sufficient funding and resources to bolster ongoing work with New York State to manage and eradicate Giant Hogweed. I also urge USDA to continue developing best practices and communication strategies to alert New York State residents of the dangers of Giant Hogweed and actions they should take when these plants are sighted in the community. Taken together, these actions will not only help preserve New York’s pristine open spaces, but also will help protect the health of the New York residents and visitors who work, play, or vacation outdoors.

Giant Hogweed is an invasive species that is native to the Caucasus Mountain Region between the Black and Caspian Seas. This invasive plant was first introduced in the United States in the early twentieth century and has since become established in the New England, Mid-Atlantic, and Northwest regions. According to the New York State Department of Environment Conservation’s (DEC) most recent Statewide Distribution map, Giant Hogweed has been detected statewide, and is most prevalent in Central and Western New York. Giant Hogweed has been characterized by APHIS as a Federal Noxious Weed, and is known for crowding out native species and producing toxic sap that presents health risks such as painful burns or blindness to people who come in contact with it. I applaud the work that USDA, in conjunction with DEC, has done to help contain the spread of Giant Hogweed in New York State. I urge the USDA to build on this effort and to prioritize the allocation of additional resources and technical expertise toward efforts to not only contain and eradicate Giant Hogweed, but also to educate the public to the risks that this invasive species poses for public health and environmental damage.

Giant Hogweed is a threat to public health and safety and to the natural ecosystems in New York State. Therefore, I am asking you to direct all available resources to stop the spread of this invasive species in our state. I am also requesting that you continue to work with and provide technical expertise to local partners and communities to best educate citizens about detection, eradication, safety precautions, and (if necessary) treatment methods for burns caused by this truly noxious weed. I look forward to working with you to protect residents, visitors, and outdoor spaces in New York State. I appreciate your attention to this important request.

The impact of invasive grasses on South Texas landscapes
June 3, 2020

What to monitor on native rangelands in May
May 7, 2020