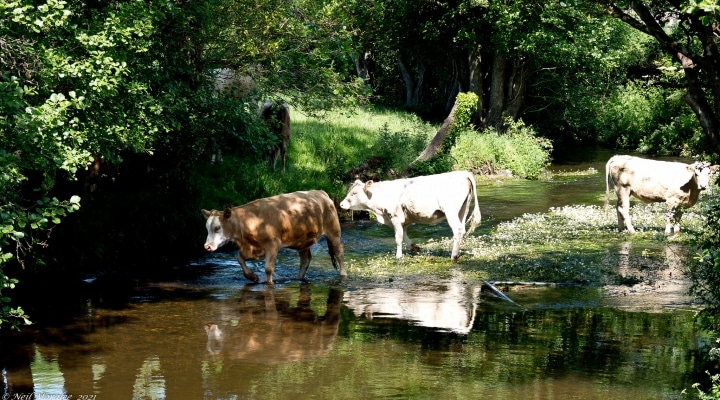 Many farmers know the chaos that can ensue when livestock escape enclosures and cause a hazard on roadways. But vigilant motorists can be of assistance when livestock is at-large by calling for backup. (photo by Neil Moralee, creative commons/flickr.com)

TROUTVILLE, Va. — Karen Henderson remembers being in the middle of the busy intersection of U.S. Routes 11 and 220—still dressed in her formal office attire—as she chased a cow that escaped the family’s livestock truck on the way to the stockyard.

Many farmers know the chaos that can ensue when livestock escape enclosures and cause a hazard on roadways. But vigilant motorists can be of assistance when livestock is at-large by calling for backup.

“We were very careful going down the road with a cow in the back,” recalled Henderson, who had recently married a Botetourt County dairy farmer in 1993. She agreed to accompany her husband, Jeff, on the stockyard errand.

The cow was becoming restless. Before they could pull over to calm the animal, she stomped through the wooden slats on the truck.

“As we pulled into the gas station and put on the brakes, that cow jumped out of that truck bed, smashed into the roof, and slid across the parking lot,” Henderson recounted. “Before we could even get out, she was on her legs and running!”

Henderson quickly called the sheriff’s office from the gas station, letting them know the location of their fugitive cow.

“Then the cow went through the intersection, and I followed her into traffic, right at noon rush,” Henderson said.

With help from an animal control officer, they finally cornered the cow and arranged for new transport.

“She was a little skinned up,” Henderson said. “But she was fine.”

Some stories of errant livestock don’t have as happy an ending. While Virginia law and local ordinances outline restrictions on unsecured animals in the right-of-way, hooved or feathered escape artists still manage to break free. This often results in property damage, bodily injury or loss of the animal.

“And motorists who encounter livestock should contact the landowner, if you know them, or take note of the location and call local animal control or law enforcement,” he continued. “It may be instinctual to shoo livestock from the road, but it’s safest to remain in the vehicle. Farmers know their animals, and how to best corral them back home.”

Fisher said if motorists want to be helpful, they should park in a safe place, and turn the car’s hazard lights on, which can slow approaching drivers.