Home » Call for action to prevent puppy mills from resurfacing 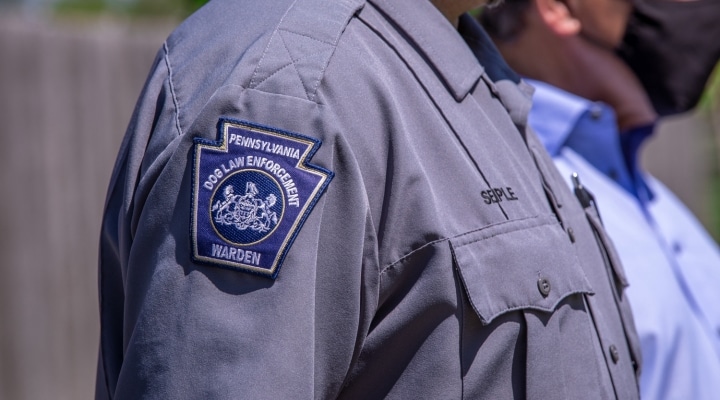 Today, Department of Agriculture Deputy Secretary Fred Strathmeyer was at Willow Spring Kennels in Bucks County to discuss the sad situation facing Pennsylvania dogs due to inaction to raise dog license fees. State Representative Frank Farry, scheduled to join the event was unfortunately unable to attend, but expressed his support for legislative action.

Dog wardens of the Bureau of Dog Law Enforcement inspect commercial kennels at least twice a year. Since its inception in 1893, the bureau has been funded mostly with the sale of dog licenses. While the nominal license fee has not been increased in 25 years, the duties of dog wardens have been greatly broadened. Now the bureau is understaffed and barely able to keep up with the minimum required inspections. That is going to lead to the return of puppy mills in Pennsylvania.

“The majority of licensed commercial kennels give their dogs exceptional care and they rely on publicly available kennel inspections to prove their good work and quality, because, unfortunately, not all kennels meet these high standards,” Strathmeyer said. “That is why commercial kennels are required to be inspected a minimum of twice a year. Dog warden inspections assure conditions are safe for the dogs and puppies that live there. The more frequent the oversight, the better conditions for dogs.”

“We became breeders to share these wonderful love sponges with other families and individuals and to provide a vocation for two of our adult children,” Smith said. “Over the years, as small business owners, we have relied on quality inspections by the Bureau of Dog Law Enforcement as well as assistance from the bureau with new requirements. The bureau’s work helps breeders like us maintain a high standard of care and discourages unfair competition from substandard kennels and unlicensed breeding operations.”

“Sometimes I found dogs in heartbreaking conditions. That was at a time when Pennsylvania had the ugly reputation of Puppy Mill Capital of the East,” Donmoyer said. “Based on the deplorable conditions dog wardens were finding in some kennels, the legislature stiffened rules in 2008 for kennel owners. Higher standards and frequent oversite helped weed out bad actors and rescue suffering dogs.

“The puppy mill capital label doesn’t describe Pennsylvania anymore. Pennsylvania has come so far in the treatment of dogs. I don’t want to go backwards and neither does anyone with a heart for animal welfare. We’ve trimmed all we can trim in our budget and have been limping along with too few dog wardens for too long,” added Donmoyer.

“I’m glad to have the opportunity to share my support for House Bill 526.” Rep. Farry said. “This important legislation would simplify the commonwealth’s dog licensing structure and help ensure adequate funding for the Bureau of Dog Law Enforcement to carry out their mission of keeping Pennsylvanians and their pets safe.

“Without a fully funded bureau, we risk dogs across the commonwealth being bred in dangerous and neglectful settings with no watchful eye to come to their rescue. Sadly, PA continues to struggle with a prevalence of puppy mills and now is the time to increase our support for the bureau’s efforts, not to leave them without the resources to do their job.

“About 87% of the BDLE’s funding comes from dog license fees, which have not increased in over two decades. This legislation would simplify the way dogs are licensed, by coupling the process with points of sale or transfer and would protect the health and safety of dogs and their owners. We have heard too many horror stories of dogs being abused in breeding situations or breeders selling dozens of diseased dogs with little to no recourse. We cannot allow these practices to continue and put our healthy pets and Pennsylvania families at risk.

“As Co-Chair of the House Animal Protection Caucus, a dog owner and animal lover, I support providing the resources that help eliminate animal cruelty and neglect from Pennsylvania. I’m proud to support legislation that will help continue the mission of the bureau in protecting the health and safety of dogs and their owners.”

In addition to kennel inspections, the Bureau of Dog Law Enforcement has other vital responsibilities felt by all Pennsylvanians. The bureau manages the Dangerous Dog Registry and seeks justice for dog bite victims; reimburses farmers for livestock harmed by dogs or coyotes; picks up stray dogs and uses the dog licenses to reunite lost dogs with owners.

For several years the Department of Agriculture has pushed for a minimal dog license fee increase to keep the Bureau of Dog Law Enforcement funded to continue their work to crack down on illegal kennels, register and track dangerous dogs, and ensure the health and well-being of dogs in Pennsylvania, but the legislature has not heeded that warning.

With the funding shortage, taxpayer dollars are being redirected to the bureau to keep the minimum mandated services up and running. Governor Tom Wolf’s proposed budget includes a supplemental transfer of $1.2 million for 2020-21 in addition to a transfer for 2021-22 of $1.5 million. These funds are coming from all taxpayers, rather than a small fee that is a built-in responsibility of dog ownership.

The bills, which have growing bipartisan support, propose an increased license fee for most dog owners from $6.50 to $10 annually. They also require puppies to be licensed at eight weeks — the age they are legally allowed to be sold or adopted — a shift from the current standard of 12 weeks. This is expected to increase license sales by raising dog-owner awareness of their responsibility to buy a license.