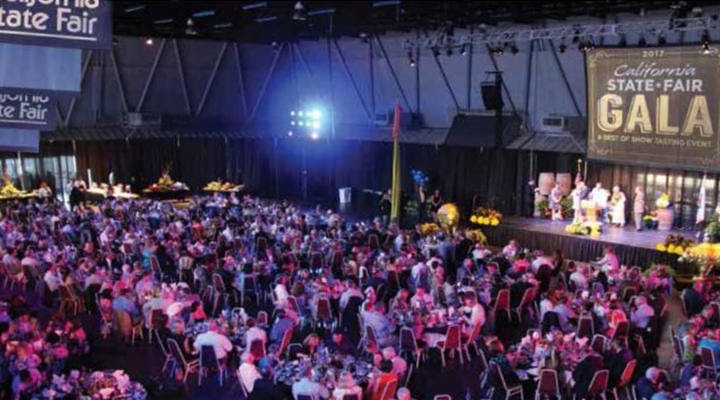 The Agriculture Progress Award was received by Chris Zanobini, President and CEO of Ag Association Management Services Inc., while The Golden Bear Award was earned by Pete Leesha. Chris Zanobini and Pete Leesha will receive their awards at the 2017 California State Fair Gala on Thursday, June 22. (Courtesy Photo)

The Agriculture Progress Award was established in 1994 and is presented to an individual or organization that has contributed extensively over a number of years to the promotion, advancement, and growth of the California State Fair Agriculture Programs.

This year’s recipient is Chris Zanobini, President and CEO of Ag Association Management Services Inc. which represents various agriculture-based organizations. Chris is also the Chair of the Alliance for Food and Farming and the Chair of the California State Fair Ag Advisory Board.

Agriculture, the Fair, and Chris have a long history together. While attending U.C. Davis, Chris worked with Ag Programs at the California State Fair. That experience gave him a deep appreciation for what the Fair does. Later in life, he helped start the State Fair Farm Scholarship program, which provides funds so students-in-need can take a Farm Tour at Cal Expo. Chris also uses his industry connections to support the Fair’s Ag Programs.

When Chris found out he was the recipient of this year’s Agriculture Progress Award he didn’t know what to stay. “It’s hard to put into words how I feel,” said Chris. “I have been connected to the Fair for such a long time. It means a lot. I’m honored to support such an incredible ag program.”

Throughout his career, Chris has served many agricultural groups including California Grown, The World Apple and Pear Association, and The Ag Export Council. His goal is to make sure everyone knows the vital importance of agriculture.

Pete Leesha is this year’s recipient of the Golden Bear Award. A Sacramento native, Pete’s love of the California State Fair goes back to his childhood. “My mom would take my brother and I to the Fair back when it was held on Stockton Blvd,” he reminisced. “Ever since then I’ve been an advocate for the Fair. I believe in what the Fair does.”

Pete has made an incredible career for himself. He attended Sacramento City College, served in the military, and then got his start in Stockton as a night loader at Bell Distributing in 1976. He worked hard and quickly rose through the ranks, holding positions in merchandising, sales, and sales management; eventually becoming the Vice President of Marketing, Specialty Brands, and Government Affairs with DBI Beverage Inc. Pete retired from DBI Beverage in February 2017.

When Rick Pickering, President and CEO of the California Exposition and State Fair, called to let Pete know he had been chosen to receive this year’s Golden Bear Award, Pete was in shock, “I couldn’t wait to tell my family. I was thrilled.”
Chris Zanobini and Pete Leesha will receive their awards at the 2017 California State Fair Gala on Thursday, June 22. Also receiving awards that evening are:

Tickets, tables, and sponsorships for the Gala are available now. Click here to purchase. More information can be found at castatefair.org/gala or e-mail gala@calexpo.com