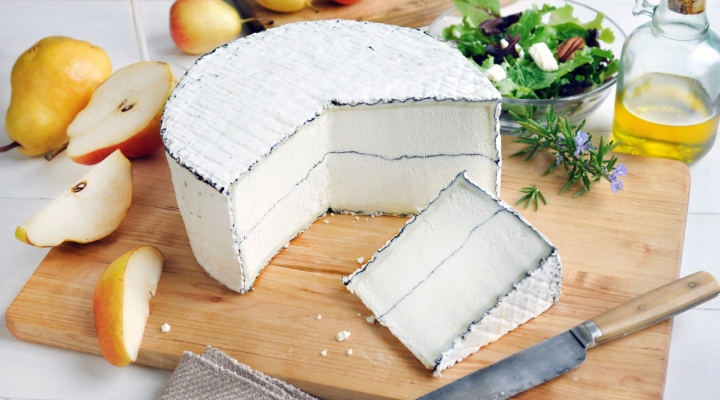 SACRAMENTO (THE CONVERSATION) — The idea for Humboldt Fog goat’s milk cheese first came to Mary Keehn in a dream. She fell asleep on an airplane and awoke with a vivid picture in her mind of how the cheese looked. And then she set out to realize her vision – in the process, helping to launch a late-20th-century American renaissance in artisan cheese-making.

But the dream didn’t come from nowhere. In Keehn’s telling, the revelation occurred on a transatlantic flight home from France, where she’d gone in 1992 as a young cheese-maker looking for new inspiration by tasting traditional French cheeses and visiting their makers. Indeed, a wheel of Humboldt Fog melds elements of two iconic French cheeses, with a Morbier-like ribbon of ash running through chalky paste more reminiscent of a soft-ripened Valançay. The result is thoroughly distinct.

The story of Keehn’s Cypress Grove Cheese is a quintessential telling of the California dream. Not merely an entrepreneurial success story, it is a narrative of self-reinvention. The California dream is about moving west (or, as in Keehn’s case, farther north, to Humboldt County from Sonoma) to start anew, seeking not so much to get rich quick as to envision and inhabit a new identity. Cypress Grove’s heroine embodies characteristics that could describe the American artisan cheese industry as a whole: scrappy, innovative and unapologetically indebted to European tastes and know-how – condensing themes that emerged through anthropological research I conducted across the United States for my book, “The Life of Cheese.”

Back to the land, making cheese

Mary Keehn acquired her first goats in 1970, wanting to feed fresh goat’s milk to her first daughter, whom she was herself then weaning. For years, Keehn and her family lived as self-sufficiently as possible. Overwhelmed with more goat’s milk than her human companions could or were willing to drink, she began experimenting in her kitchen and learned to make fresh cheese, or chèvre.

A friend who was opening a restaurant told Keehn, now a divorced mother of four, “If you start a [licensed] cheese factory, I’ll buy your cheese.” And in 1983 – without any official training, apprenticeship or business experience beyond selling her goats’ breed stock – Keehn launched Cypress Grove. For nine years, prior to the trip to France and subsequent introduction of Humboldt Fog, Cypress Grove sold fresh chèvre and fromage blanc, cheeses more wholesome than gourmet.

Indeed, Keehn was one of a number of Americans involved in the back-to-the-land movement who, in the early ‘80s, began making cheese by hand for commercial sale. Located in the Northern California coastal town of Arcata, Keehn grew Cypress Grove into a successful business with national distribution and name recognition that employs over 40 workers – a far cry from its modest origins. In 2010, Keehn sold the company to the Swiss corporation Emmi, although her daily involvement continues.

Today’s cheese lovers can drive (or internet browse) along the California Cheese Trail, stretching from Crescent City near the Oregon border south to Los Angeles. It leads to artisan microdairies as well as Kraft Foods subsidiaries. Created in 2010 by a Marin County dairy farmer’s daughter on the model of wine-tasting maps, the California Cheese Trail today features 72 cheese-making operations. Nationwide, the American Cheese Society counts more than 900 artisan and specialty cheese operations.

Reflective of the state’s cultural diversity, the variety in California cheese-making is neither new nor unique to the state. But it is indicative of how food-making traditions in the United States are often animated by personal narratives of innovation rather than, as in Europe, adherence to customary tradition.

Since 2000, the number of California’s artisan cheese producers has grown exponentially. But while hippie goat ladies have been celebrated as cheese-making pioneers, they are not without precedent. The California dream of a century earlier saw a similar flourishing of cheese-making activity in port cities up and down the Pacific Coast.

The Marin French Cheese Company, in Petaluma, California, claims to be the oldest continuously operating cheese factory in the United States. In 1865, with Lincoln in the White House and the Civil War coming to an end, Marin French (originally Thompson Brothers Cheese Co.) got its start when Jefferson Thompson, a dairy farmer, recognized an emergent market niche in the nearby port town of San Francisco.

The now late Jim Boyce, who purchased Marin French in 1998 from Thompson’s descendants, related the company’s history to me in the course of my own research. During the California Gold Rush between 1849 and 1855, European stevedores who sailed into what’s now called San Francisco Bay delivering goods to support the mining enterprises got “caught up in the fever” themselves. Many abandoned ship to seek their own fortunes mining.

After the gold rush went bust, workers returned to the bay to make a living at the dockyards. As Boyce said to me, “Now, in any workman’s bar or inn… the beer gives them hydration and carbohydrate but no protein,” so “typically in a workman’s bar there’s a jar of pickled eggs or something like that – pig knuckles, sausage.” But in the Bay Area at that time agriculture had yet to be fully developed. “There weren’t any eggs,” Boyce explained, as there were no commercial hen farms. So according to Boyce, enterprising dairy farmer Jefferson Thompson said to himself:

“in a moment of marketing brilliance, ‘I wonder if they’d eat cheese, instead?’ So he starts making these little cheeses, three-ounce cheeses, more or less. And he hauls them off to the docks, and they put them on the table in a bowl, and they were an immediate hit! Why? Because these are European stevedores: They knew cheese! They ate it breakfast, lunch and dinner. And that was the origin of the company.”

The Gold Rush brought European deckhands eager to eat soft-ripened cheeses. Marin French was at the ready, hand-ladling Camembert. In the late-20th century, hippie eaters of “health foods” gave way to American Europhiles who valued a diversity of distinctive tastes.

Here it is worth remembering that California, nearly all the up way to present-day Arcata, was until 1848 part of Mexico. Cross-cutting immigrant histories have long underwritten the California dream – and they still do.

The California Cheese Trail declares Ariza Cheese, established in 1970, to be “the oldest artisan Mexican cheese-maker in Southern California.” It specializes in Salvadoran cheeses in addition to crumbly Mexican Cotija. You will find Ariza just off Alondra Blvd. in the city of Paramont, east of Compton in LA County.

In 2015, four of the company’s long-term employees – immigrants from Mexico and El Salvador – purchased the company with the aid of Concerned Capital, a social benefit corporation that invests in low- to moderate-income communities by helping to transfer business ownership to workers.

In 21st-century narratives of new beginnings are echoes of earlier immigrant worlds. Dreams upon dreams – while consumers continue to savor California cheeses with wide-ranging inspirations.

This article is republished from The Conversation under a Creative Commons license. Read the original article here: http://theconversation.com/gold-rush-opportunists-hippie-goat-ladies-latino-newcomers-california-entrepreneurs-dream-of-cheese-79469.