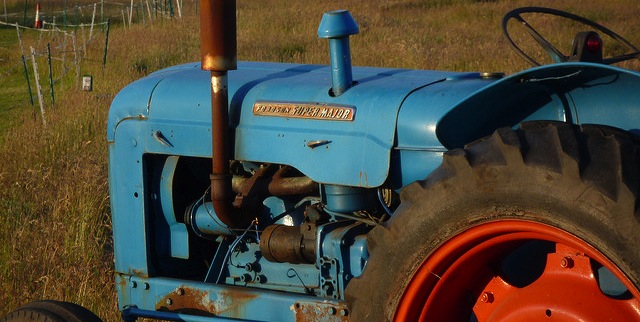 Some of the cap and trade money will go to helping producers replace older, less-efficient tractors and harvesting equipment, said Kelly Covello, president of the Almond Alliance of California. (markpeate, Flickr/Creative Commons)

Businesses have been concerned about the costs of addressing climate change and say the tax relief will help them compete with rivals in other states. But the tax breaks have angered some on the left who characterize them as giveaways to corporations. A new tax exemption on some renewable energy and agriculture production equipment will cost the state an estimated $88.5 million annually, according to a legislative analysis.

Eight Republican lawmakers voted to extend cap and trade Monday despite misgivings from much of the GOP base. They portrayed the system as the lowest cost way to comply with an aggressive carbon-reduction mandate signed into law last year.

Sen. Tom Berryhill of Twain Harte in the Central Valley, the only Senate Republican to vote for it, said he came on board when Brown agreed that some of the money generated through cap and trade would be used to benefit agriculture.

“I’m a farmer by trade. When my industry came to me and asked for my help, I got it for them,” Berryhill said. “And when the governor came through, that got my vote.”

Some of the cap and trade money will go to helping producers replace older, less-efficient tractors and harvesting equipment, said Kelly Covello, president of the Almond Alliance of California.

Equipment used in agricultural processing and renewable power generation will be exempt from the state’s roughly 4 percent sales and use tax under the deal. Some manufacturing and biotech research equipment is already exempt from the tax, and the bill maintains that carve out through 2030, eight years beyond its planned 2022 expiration.

Republicans in general back tax breaks, and the agriculture exemptions in particular may have been a sweetener from lawmakers with large farming communities in their districts, including some Democrats.

The exemption for power generators and distributors is targeted at alternative energy, including geothermal, wind and solar. Equipment such as solar panels and batteries, wind turbines and biomass boilers would qualify. Combined with the manufacturing exemptions that already exist, the total cost of the exemption sits around $260 million annually.

Money lost from the exemption will be replaced by revenue from cap and trade. Environmental justice advocates, who opposed the bill, said this ties up millions of dollars that should be used to improve the environment.

Many property owners will also benefit from the suspension of a fire prevention fee assessed on structures that are primarily in rural areas. Republicans have fought to repeal the fee since it was enacted several years ago.

Not all businesses are supportive. The National Federal of Independent Business said its members were overwhelmingly opposed.

“Some believe Cap and Trade only impacts big businesses that buy and sell carbon credits, but the truth is that small businesses and consumers all pay the ultimate price of higher energy costs to produce and deliver goods,” the group’s director, Tom Scott, said last week.