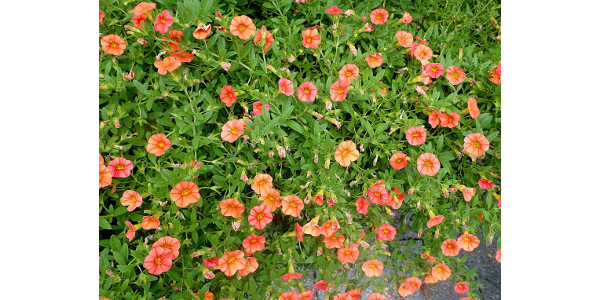 COLUMBIA, Mo. — While new flowering species are introduced on a fairly regular basis, very few have supplanted longtime garden favorites such as geraniums and petunias, says University of Missouri Extension horticulturist David Trinklein. An exception is calibrachoa, or “callie” for short.

Introduced in the 1990s, this diminutive relative of petunia has become one of the hottest sellers in the bedding plant industry. The National Garden Bureau named calibrachoa its 2018 flowering annual of the year. With flowers about an inch in diameter, callies look very much like miniature petunias. What sets them apart, Trinklein says, is the palette of vivid colors and patterns of their flowers. Varieties with yellow, orange or bronze flowers are commonplace.

Since calibrachoa flowers produce very few seeds, the plant’s energy is devoted to producing more flowers rather than ripening seeds. While this enhances its attractiveness, it means most varieties need to be vegetatively reproduced. This costs more than starting plants from seeds, Trinklein says, so expect to pay just a bit more for callies than you would for most petunias.

The added expense is well worth the investment, he says. Callies are heat-tolerant and produce loads of flowers. Calibrachoa is semi-trailing and grows to a height of about 12 inches, making it an excellent “spiller” plant in a combination planter or hanging basket.

“As a matter of fact, calibrachoa probably performs better in a container filled with a soilless growing medium than in a garden bed or border,” Trinklein adds. This is especially true if the soil lacks good drainage.

However they are used, callies need full-sun exposure. Partial shading leads to decreased flowering and a less attractive display of color. Callies are fairly heavy feeders and should be given additional fertilizer during the growing season. Feed every other week with a liquid or soluble fertilizer according to label directions, Trinklein says.

Calibrachoa seems to have a higher need for iron than most bedding plants, he says. Therefore, the growing media should be maintained at a pH level in the 6.0 range, which is slightly acid. Additionally, feed with iron sulfate or chelated iron if new growth becomes yellowish.

Callies are relatively pest-free but can suffer from root rots such as pythium and phytophthora if grown in poorly drained soil or when overwatered in a container.

Nearly every major seed or plant company has jumped on the calibrachoa bandwagon. Million Bells, Superbells, Cabaret, Cruze, Calipetite and Can-Can are series to look for in the bedding plant market this spring, Trinklein says. “All bring dazzling color and outstanding performance to the garden.”