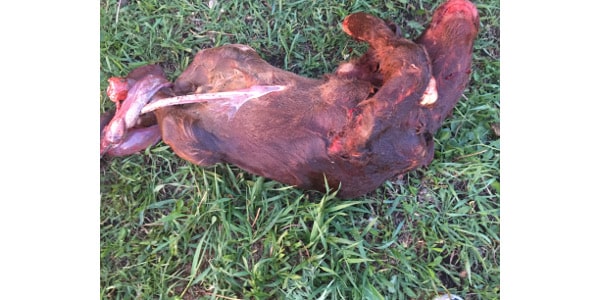 A loss of calves before they're born is a major concern for livestock producers. Their goal is live calves, like this one. (NDSU photo)

FARGO, N.D. — Abortions can be a major concern for cattle producers.

An “abortion” is the discharge of the fetus prior to the end of the normal gestation period, according to Gerald Stokka, North Dakota State University Extension veterinarian and livestock stewardship specialist. Many abortions occur within the first 45 days of conception (called early embryonic death), and the embryos or fetuses are so small that they may not be seen.

Other abortions may occur near normal calving time, and determining whether the cow has aborted or a premature birth has occurred is difficult. A stillbirth is when a full-term calf is born dead, with no obvious evidence of the cause of death.

Abortions have many causes, including physiological causes such as extreme environmental or handling stress and hormonal imbalances, metabolic problems, toxicoses and/or infectious diseases caused by protozoa, fungi, bacteria or viruses, says Brett Webb, director of the NDSU Veterinary Diagnostic Laboratory.

Abortions and stillbirths can be the result of a direct effect, such as viral, bacteria or protozoal organisms gaining entrance to the fetus. The fetus also may have abnormal development (congenital defects) that results in abnormalities noted at delivery, such as a lack of the anus opening or inside-out calf, or inherited genetic defects such as “curly calf” or “fawn calf” syndrome.

Stillbirths can be frustrating because producers often see no indication of the cause or evidence of excessive labor. These simply can result from an umbilical cord rupture, premature separation of the placenta or the placenta blocking the nostrils after the delivery of an otherwise healthy calf.

Regardless of the cause, abortions may be sporadic or they may occur as “storms.” The normal abortion or stillbirth rate would be 1% to 2% of cows in a herd. Losses greater than this are abnormal, and producers should seek veterinary assistance to identify the cause, says Janna Block, Extension livestock systems specialist at NDSU’s Hettinger Research Extension Center. Block also advises producers to keep good records of calf and cow losses because indemnity payments may be available to offset some of the losses.

“The best chance of identifying what caused an abortion is prompt submission of fetal and placental tissues and maternal blood or serum to a diagnostic laboratory,” Stokka says. “Contact your veterinarian for assistance with diagnostic efforts, sample submission and identifying management strategies to reduce the risk of future abortions.”