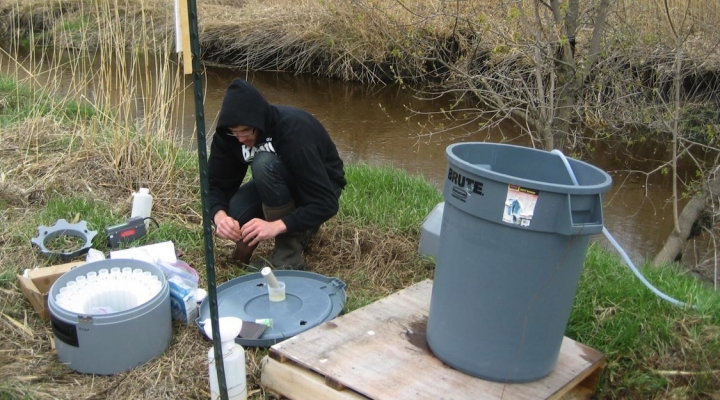 Ross prepares water samples after a rain fall. These carefully labeled samples will help tell the story of how the water moves during and after a rainstorm or snow melt. (Janelle Laing)

WINNIPEG, Canada — Just ahead of a rainstorm, Cody Ross might run out to an agricultural research site as part of his graduate work. He’ll need to get some dye into an injection well. The point? To evaluate the path that water follows from the field during and after the rainstorm.

Ross, a member of the Watershed Systems Research Program at the University of Manitoba, is measuring water flow in a part of the soil called the vadose zone. Although the name might make you recall scary episodes of the “Twilight Zone,” the vadose zone is just the saturated level of soil right under the surface. It can be just a few centimeters to over a meter in depth. And the vadose zone is where important things happen in the soil.

The vadose zone is complex. Within it, sand particles are huge in comparison to clay particles, affecting water flow. That’s why you can see water percolate through sand quickly on a beach. Healthy soils also have a good amount of organic matter from decaying plants or insects. Finally, tiny pores exist, filled with air or stored water. Plant roots grow down into the soil to gather up water and nutrients. Microscopic microbes live down there, as well as larger animals like earthworms and nematodes.

Ross’ work is important because how water moves over, through, and around all those soil particles, organic matter, pores, microbes, and roots matters. It’s something growers would like to know – especially in places where precipitation is infrequent. The southeastern Canadian Prairie area, where Ross is researching, has a seasonally dry environment.

Previous work on water movement in the vadose zone has been done in hilly areas in the United States, or in the western Canadian Prairie. Just like you can’t expect one episode of the Twilight Zone to be the same as another, you can’t expect a soil in one region to act like one in another. There can even be differences in the same farm field, depending on the amount of organic matter, composition of soil particles, and other features. The southeastern Canadian Prairie soils, compared to western, have more organic matter in them. That increase in organic matter helps the soils retain moisture in summer and fall. It impacts drainage potential. Organic matter also influences how long the ground stays frozen in winter and spring.

Differences in the topography of the land are significant, too. Imagine sledding down a hillside in Vermont…and now imagine trying to sled in the flat areas of the southeastern Canadian Prairies. Gravity is not going to help you much there. The same is true for water.

Water movement in soil is also impacted by its chemical properties. Clay particles of soil actually have a negative charge. This means soils with a higher clay content can hold onto water better than sandy soils. Organic matter can absorb and release water, too.

Ross used other researchers’ math formulas – and developed some of his own – to predict how the water was moving during rainstorms and times of snow melt. The dye he injected into the wells helped him determine if the water he collected from waterways was “new” from the rain event, or “old” from previous storage.

“Research focused on the age of water has significance in many applications,” says Ross. “We want to know if water going to a stream came directly from the field, or followed an alternative path. Does that alternate route change the water quality? Does it slow the delivery to the channel?” All these questions can lead to helpful predictive tools.

“As in most disciplines, the use of math has tremendous utility,” says Ross. “We used mathematic expressions to help us interpret how water moves in soil. The ability to use mathematical models in this way is very powerful. It is often less expensive than physical observations, especially in circumstances where research is focused on large or inaccessible regions.”

Ross’ research found that, unlike other areas, there was a significant amount of old water that moved to the streams. “Previous research conducted in the Prairies has pointed to new water as more dominant,” says Ross. “This was not the case in our study.”

Although you can’t control whether you’ll have a drought – or a flood – studying water movement in soil is important. “Having a better understanding of how water moves through the landscape provides insight for water management decisions,” says Ross. “Understanding the relative contributions from old and new water sources can influence management decisions related to flooding and water quality.”

Future research to build on Ross’ work might focus on alternate locations, to see how common Ross’ findings are. “Studies focused on how land use and climate change are impacting water movement in soil in the southeastern Canadian Prairie area would be beneficial,” Ross adds.