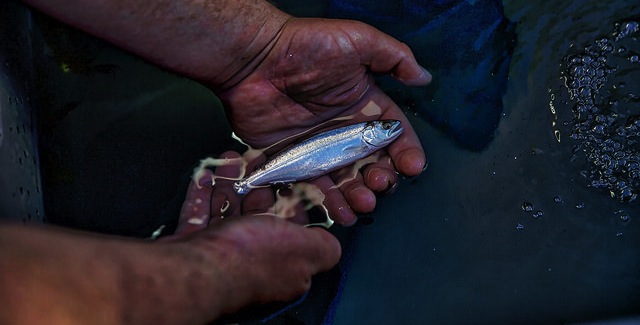 The agencies' combined efforts to get fresh water into the fish hatchery saved more than 5 million baby spring-run salmon in the rough and muddy water from the spillway erosion. Salmon in California generate $1.4 billion a year in economic activity. (Pacific Southwest Region USFWS, Flickr/Creative Commons)

OROVILLE, Calif. — The California Department of Fish and Wildlife honored employees yesterday from agencies that provided assistance during the emergency evacuation of millions of spring-run salmon from the Oroville Fish Hatchery this past February. California Water Service (Cal Water) employees Lynne McGhee, Kim Gregory, John Graham, Mike Jones, Greg Silva, and recently retired Toni Ruggle were among those recognized by the Department.

Assemblymember Brian Dahle presented Certificates of Recognition on behalf of Assemblymember James Gallagher to Cal Water, Cal Fire, and Department of Fish and Wildlife employees. Salmon and sport fishing non-profit organizations CalTrout, Golden Gate Salmon Association, and the Nor Cal Guides and Sportsman’s Association also presented awards to the employees, who had all participated in the historic emergency engineering in which fresh water from Cal Water fire hydrants was utilized to keep the fish alive long enough to be loaded for transport to an off-stream facility.

However, about 1 million steelhead eggs could not be relocated; Cal Water partnered with the Department of Fish and Wildlife and Cal Fire to ensure the eggs, listed as threatened under the Endangered Species Act, would survive the storms and more turbid water flow from the Oroville Dam spillway and Feather River. Cal Water also worked with the Hatchery to ensure the fresh water went through a granular-activated carbon filtration system to remove the chlorine, utilized to make water safe for human consumption but which can impact fish, before the water was routed to the eggs.

“The combined effort of our local Oroville staff and teams from other agencies to work quickly to save these threatened species makes me proud to be part of this effort,” said Lynne McGhee, Cal Water Vice President, General Counsel. “Whether in times of crisis or the average day, we remain committed to doing the right thing for both our community and environment.”

The agencies’ combined efforts to get fresh water into the fish hatchery saved more than 5 million baby spring-run salmon in the rough and muddy water from the spillway erosion. Salmon in California generate $1.4 billion a year in economic activity.

“The Oroville Dam crisis was a challenge, but despite the chaos, our team performed flawlessly with our emergency response, which included helping to save the juvenile salmon and steelhead eggs,” said Marty Kropelnicki, Cal Water President and CEO. “I am personally very proud of our team and all of the agencies involved for the millions of salmon they helped save.”

California Water Service serves about 2 million people through 482,400 service connections in California. The company has provided water service in the state since 1926. Additional information may be obtained online at www.calwater.com.