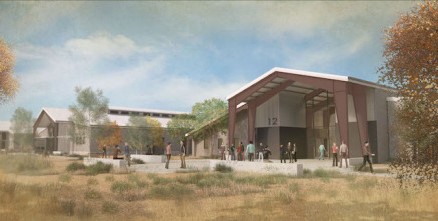 Lynda and Stewart Resnick, owners of JUSTIN Vineyards & Winery, a family-run winery that focuses on Bordeaux varieties and Syrah in west Paso Robles, donated $2.5 million to Cal Poly’s campaign to build the Center for Wine and Viticulture. Jerry Lohr of J. Lohr Vineyards, an industry icon also based in Paso Robles, has also committed $2.5 million in funding and will be a co-namer of the Center for Wine and Viticulture.

“The local wine community has stepped forward in support of this project, solidifying a partnership with Cal Poly that will not only benefit students for years to come, but provide the rigorously trained talent that the wine industry depends on,” said Andrew Thulin, dean of the College of Agriculture, Food and Environmental Sciences.

“Cal Poly has demonstrated the university’s commitment to providing future generations of wine makers and vintners and its support of the wine industry at a national level,” said Stewart Resnick, co-owner of JUSTIN Vineyards & Winery. “Our investment in the Cal Poly Center for Wine and Viticulture signifies our commitment to a partnership that will allow the industry to continue to prosper. We are not just giving back, we are investing in the future.”

A groundbreaking ceremony, attended by key donors and supporters, as well as Cal Poly leadership, faculty, staff and students, was held May 4. A public event will be held once construction is complete. The JUSTIN and J. LOHR Center for Wine and Viticulture is anticipated to open in late 2019.

The JUSTIN and J. LOHR Center for Wine and Viticulture is a donor-funded project that will enhance the Wine and Viticulture program at Cal Poly for years to come. The geographic locale of Cal Poly positions it at the heart of California’s Central Coast – providing students with hands-on access to vineyards and wineries to learn first-hand from some of the wine industry’s top leaders and some of the country’s best winemakers. Students, who benefit from Cal Poly’s philosophy of Learn by Doing, have access to thousands of award-winning wineries throughout the state, providing abundant internship and research opportunities.

The JUSTIN and J. LOHR Center for Wine and Viticulture will include both a 15,600-square-foot winery and a 12,000-square-foot grange hall. The buildings will include crush, fermentation, barrel, sensory, bottling, enology and viticulture rooms, as well as teaching and research labs, a bonded winery, offices, and community and industry meeting spaces. Professional partners in the project include TLCD Architecture as the executive architects, Von Raesfeld & Associates as the winery consulting architects, and JW Design & Construction as the contractor.

“We would not be where we are today, ready to begin construction, without the countless volunteers who stepped forward and the leadership and persistence of our longtime supporters, including Jerry Lohr who has been with the project since its inception and led the charge in rallying the wine community to support our vision for the future,” said Thulin. “The symbiotic relationship that is shared by Cal Poly and the wine industry nationwide will now be commemorated brick by brick.”

“I am elated to celebrate the start of construction of the Center for Wine and Viticulture – a vision that I have supported since the beginning,” said Jerry Lohr. “With the partnership of JUSTIN Vineyards & Winery, years of planning will now emerge as the preeminent program for wine and viticulture students in the nation.”

Cal Poly’s Wine and Viticulture program, the largest of its kind in the U.S., provides a comprehensive education that focuses on the three major elements of the wine industry: viticulture, enology and wine business.

The program currently has a 14-acre teaching and production vineyard and small pilot winery where students gain hands-on experience in all aspects of the industry, from vineyard cultivation and management to winemaking, marketing and distribution.

About Cal Poly’s College of Agriculture, Food and Environmental Sciences

Cal Poly is a nationally ranked, comprehensive polytechnic university. The university’s College of Agriculture, Food and Environmental Sciences is comprised of expert faculty members who take pride in their ability to transform academically motivated students into innovative professionals ready to solve the complex challenges associated with feeding the world in sustainable ways. Students have access to state-of-the-art laboratories, including ranch land, orchards, vineyards and forests, all of which provide the basis for Cal Poly’s Learn by Doing methodology. It is the fifth-largest college of agriculture in the country, with 4,000 undergraduate students.

Located in Paso Robles, JUSTIN® Vineyards & Winery was founded in 1981 and is known for crafting world class wines using Bordeaux grape varieties. Widely recognized for their iconic ISOSCELES Bordeaux blend, JUSTIN is also known for their Cabernet Sauvignon. The property at JUSTIN features a Tasting Room, luxury suite accommodations and a Restaurant – making it one of the only wineries on the Central Coast to offer all three options. In addition to its stellar hospitality offerings, JUSTIN consistently receives top honors around the world, establishing JUSTIN as a leader in luxury Bordeaux variety winemaking. In 2015, JUSTIN was named “American Winery of the Year” by  Wine Enthusiast Magazine. JUSTIN wines are available through discerning fine wine retailers and restaurants throughout the United States, or directly from the Winery via JUSTIN’s Tasting Room, on-line store or to members of the exclusive JUSTIN Wine Society wine club. To discover more about what makes JUSTIN so unique, visit  www.justinwine.com.