Home / South Dakota / CAFO permit appeal hearing
A new user experience is coming! We'll be asking you to login to your Morning Ag Clips account March 1st to access these new features.
We can't wait to share them with you! Read more here. 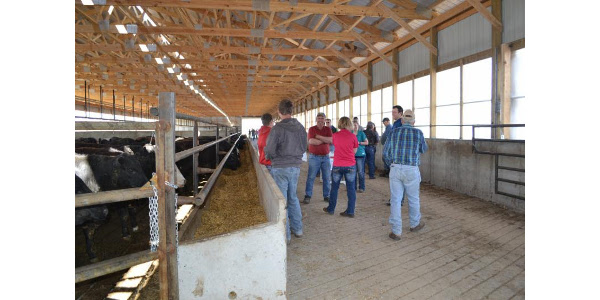 Brian has hosted Ag United bus tours at his farm and was featured in a recent profile. (Courtesy of Agriculture United for South Dakota)

SIOUX FALLS, S.D. — Brian Alderson is a farmer west of Sioux Falls. He applied for A Class C CAFO permit on January 23, and was granted the permit by the Minnehaha County Planning and Zoning Commission on a unanimous 6-0 vote. Brian is applying to build a 700 head deep pit cattle barn to replace the farm’s current hoop barn.

In the original permit hearing, Brian stated that he is a fourth generation family farmer, and his family has lived on the farm since 1876. He also stated that he is planning to build the new cattle barn to expand the family operation. Brian explained that the new barn will reduce odor, reduce visual impact, and contain 100% of the manure under the building. If you would like to learn more, read the minutes from the original permit hearing.

After the permit was granted an appeal was filed. The Minnehaha County Commission will be hearing the appeal today, February 21, at their regular meeting. The meeting begins at 9:00 am in the County Administration Building in Sioux Falls.

Brian has hosted Ag United bus tours at his farm and was featured in a recent profile. If you are able to attend the meeting to show support for the application and livestock production in Minnehaha County, please do so.