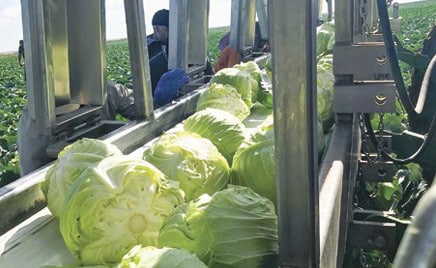 Cabbage harvest is well underway in Imperial County, where grower Jack Vessey says he expects to ship the crop for another six to eight weeks. He says most cabbage is now contracted in advance. (Photo/Cory Peeks)

SACRAMENTO, Calif. — People planning to dine on corned beef and cabbage in honor of St. Patrick should have no problem finding the traditional vegetable, as growers on the Central Coast and in the desert report they have plenty of cabbage on hand.

In fact, warm weather has bunched up production and led to less-than-ideal markets for farmers, said Tom Ikeda, who grows vegetables near Oceano in San Luis Obispo County.

“I kind of call it our winter-summer weather,” Ikeda said. “We can always count on some 75-degree days during the wintertime. That’s generally normal.”

Lately, he added, he had a week to 10 days of warm weather “that really pushed some crops, kind of bunched them together. Supplies are pretty abundant right now.”

Farmer Jack Vessey of Holtville, who raises vegetables in the Imperial Valley, said the market has been slow the past few weeks. He has red and green cabbages, along with Savoy cabbage, in his fields.

“It doesn’t take a lot of oversupply to really depress the market,” Ikeda said.

The annual celebration of all things Irish is “generally the big cabbage period, as far as demand goes,” Ikeda said, but added he hasn’t boosted cabbage acreage. His farm has green and red cabbages, Taiwanese cabbage, Napa cabbage and bok choy in production.

“We’ve been growing green cabbage long enough that we know what is comfortable,” Ikeda said. “Every year is different, because other people plant more or less, and there are years we’ve bumped up our plantings and so has everybody else, and you end up plowing under a lot without even harvesting a single head. So what we plant is what is a good, stable amount for us. In a good year, we might not have as much as we would like, but in a bad year, they’re not disking a whole bunch, either.”

In Holtville, Vessey said he expects harvest to continue for another six to eight weeks. Although his volume has doubled in the past week, all of it was spoken for long ago.

“There’s just less and less spot buying,” Vessey said. “Everybody sets up these contracts for this time of year. The amount we’re shipping right now has all been pre-contracted, pre-committed. Nobody’s calling us to say, ‘I need 10 loads of green cabbage today for St. Patrick’s.’ They were calling us six weeks, eight weeks ago, setting up this timeframe with X amount of cartons per week.”

Twenty years ago, he said, he might plant more cabbage in anticipation of St. Patrick’s Day, but with everything planned well in advance, “I’m not gambling as much.”

“You make a plan and set it up so you know your forecast out six to eight weeks, what you’ve got coming, and get it sold versus sitting in the field, not having a home for it,” Vessey said. “I’ve done that too many times, so we don’t do that too often anymore.”

Temperatures in his area have reached into the low 80s, leading to minor insect pressures, he said, adding the Imperial Valley has so far seen fairly cool weather and above-average rainfall.

Back in Oceano, Ikeda said the past two months were pretty much dry, and getting into the field to work wasn’t a problem.

“So really there haven’t been any issues,” Ikeda said. “Unfortunately, that’s part of the problem. If somebody was having issues, some of that supply would be off the market, and I think the prices would be a little bit better.”

The tale will be told by how much rain the region receives the rest of the winter into early spring, he noted.

“If you don’t have a wet winter, then everybody can stay on their planting schedules, and there’s usually no issues with crops, and you have an overabundance,” Ikeda said. “We might get a miracle March again, and if we get that much rain, it’s definitely going to affect things in the next couple months, as far as what we can get in to plant.”

A dozen things about leafy greens

Setting up heifers for repro success