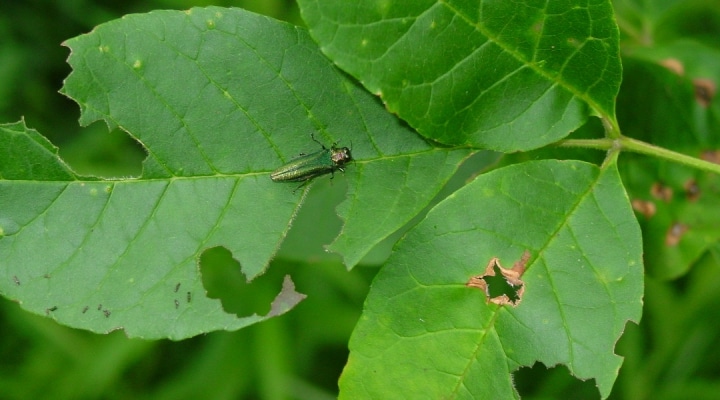 SACRAMENTO — A state quarantine has been declared to prevent the introduction of Emerald Ash Borer (EAB), Agrilus planipennis, into California. Emerald ash borer was first detected in North America in 2002 in Michigan and has now spread to 35 states.

The quarantine prohibits the entry into California of EAB and its host plants originating from any area where an EAB infestation exists.  Specifically, articles and commodities covered by the quarantine include the following:

The exceptions to the list above are articles and commodities that are free of EAB upon inspection and determined that the article or commodity has been grown, produced, manufactured, and stored in a manner that prevents the article from presenting a risk of spreading EAB.

The Emerald Ash Borer is a wood-boring invasive beetle native to Asia and causes damage to agricultural and natural resources. Adult EAB feed on leaves and lay eggs in the bark of ash trees.  The eggs hatch in 7 to 10 days and the larvae chew through the outer bark into the inner, living bark of the host, where they begin to feed and continue to develop into adults.

The cumulative damage of EAB feeding eventually kills the tree.  Larval EAB stay within the tree in which they were hatched; the adults emerge and fly less than half a mile to a new host.  The damaging effect of the feeding activity can change the structure of whole ecosystems, such as in southeast Michigan where mature ash trees have largely been removed from the landscape due to EAB damage.

Although EAB is not yet established in California, the state’s olives and olive oil may be at risk, as the pest has been shown in experimental settings to infest olive trees.

EAB is primarily spread throughout the country by artificial movement of infested ash firewood or logs.  Firewood is the major pathway that can artificially spread the pest to new areas.  EAB is just one of the serious invasive species spread by the indiscriminate movement of firewood; we urge the public to “Buy It Where You Burn It, Don’t Move Firewood.”  Visit www.firewood.ca.gov to learn more about how you can be part of the solution to this pest.

Federal, state, and county agricultural officials work year-round, 365 days a year, to prevent, deter, detect, and eliminate the threat of invasive species and diseases that can damage or destroy our agricultural products and natural environment.  These efforts are aimed at protecting California’s natural environment and unique biodiversity as well as keeping our food supply plentiful, safe, and pest-free.

From pests to protein: Edible insects as a sustainable food source
May 11, 2022