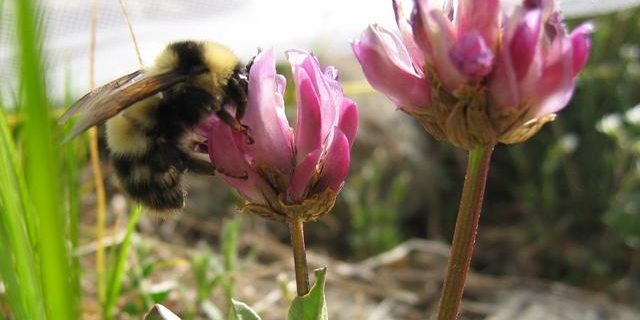 Bombus balteatus queen collecting nectar from the alpine clover, Trifolium parryi. The buzzes of bees flying from flower to flower tell scientists how much pollination the clover population is getting over time and predict seed production in these alpine wildflowers. (Jennifer Geib, Appalachian State University)

COLUMBIA, Mo. — According to recent studies, declines in wild and managed bee populations threaten the pollination of flowers in more than 85 percent of flowering plants and 75 percent of agricultural crops worldwide. Widespread and effective monitoring of bee populations could lead to better management; however, tracking bees is tricky and costly. Now, a research team led by the University of Missouri has developed an inexpensive acoustic listening system using data from small microphones in the field to monitor bees in flight. The study, published today in PLOS ONE, shows how farmers could use the technology to monitor pollination and increase food production.

“Causes of pollinator decline are complex and include diminishing flower resources, habitat loss, climate change, increased disease incidence and exposure to pesticides, so pinpointing the driving forces remains a challenge,” said Candace Galen, professor of biological science in the MU College of Arts and Science. “For more than 100 years, scientists have used sonic vibrations to monitor birds, bats, frogs and insects. We wanted to test the potential for remote monitoring programs that use acoustics to track bee flight activities.”

First, the team analyzed the characteristic frequencies — what musicians call the pitch–of bee buzzes in the lab. Then, they placed small microphones attached to data storage devices in the field and collected the acoustic survey data from three locations on Pennsylvania Mountain, Colorado, to estimate bumble bee activity.

Using the data, they developed algorithms that identified and quantified the number of bee buzzes in each location and compared that data to visual surveys the team made in the field. In almost every instance, the acoustic surveys were more sensitive, picking up more buzzing bees.

“Eavesdropping on the acoustic signatures of bee flights tells the story of bee activity and pollination services,” Galen said. “Farmers may be able to use the exact methods to monitor pollination of their orchards and vegetable crops and head off pollination deficits. Finally, global ‘citizen scientists’ could get involved, monitoring bees in their backyards.”

Currently, using the algorithms developed in this study, the team is developing a smartphone app that could record buzz activity as well as document the bees photographically. Future studies could determine whether bees detect competitors by sound and whether flowers have chemical responses to bee buzzes, Galen said.

–University of Missouri-Columbia
via EurekAlert!

Bees and pollinators: Small creatures but great allies on earth
May 24, 2022