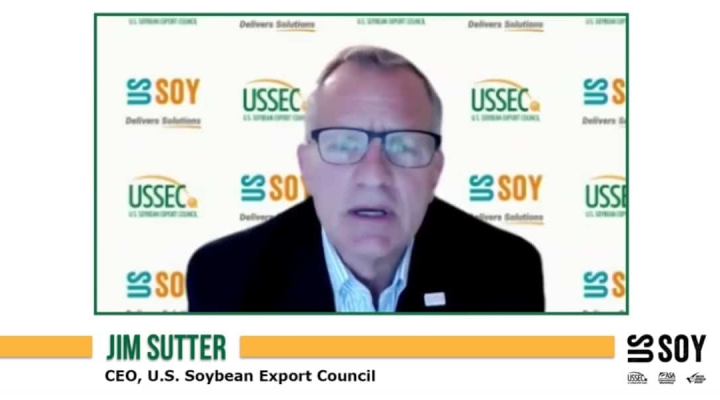 “I encourage people to understand how to maximize the value of U.S. Soy. You don’t want to over formulate with soybean meal at a time like this. Our team is here to work with you to help you maximize that value and capitalize on the amino acids, energy levels, or whatever you’re looking to capture.”

Looking at South American production, USDA cut Argentine production 1.5 MMT to 42 MMT, while Brazil and Paraguay estimates remained. With this cut, total production across Brazil, Argentina, and Paraguay is now more than 32 MMT lower than USDA’s expectations in December.

Other revisions included a shift of 200 million short tons from export to domestic use for soybean meal. For oil, old crop volume did not change, but USDA increased price projection by 5 cents to 75 cents per pound.

“Export demand will be strong … and export capacity will likely be tight,” says Sutter, who hosted the U.S. Soy World Agricultural Supply & Demand Estimates webinar the evening of the report’s release. “While the United States has a very reliable system, line-ups can develop. I encourage buyers around the world to lock in logistics and supply — that doesn’t mean you need to fix the price, but you can work with U.S. exporters to get purchases on the books so your supply is lined up.”

You can watch the webinar and read the full story here.