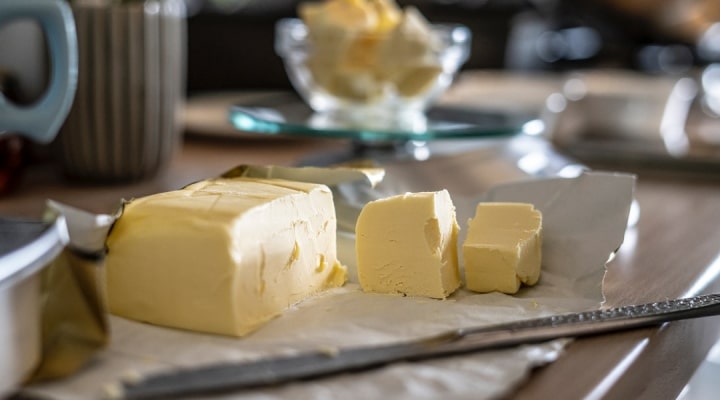 This controversy started over whether butter is harder at room temperature than it used to be. Although that question has melted away, it’s instructive to trace this story from its start. (Photo by Sorin Gheorghita on Unsplash)

OTTAWA, Canada — The recent controversies over the properties of butter and how dairy cows are fed have become a case study in media attention and the weight of evidence behind it. Anecdotal comments about the consistency of butter snowballed into sometimes overheated discussion of dairy cows’ diets.

To paraphrase the Anglo-Irish author Jonathan Swift, sensationalism flies and consideration comes limping after it. Dairy Farmers of Canada announced a committee to consider issues related to palm-based feed supplements for cows, but soon after pre-emptively asked farmers to consider avoiding their use.

The problem started with a question about a perceived change in the hardness of butter and moved to whether a contentious product such as palm oil should be used in ingredients for cows’ feed.

Something is up with our butter supply, and I’m going to get to the bottom of it. Have you noticed it’s no longer soft at room temperature? Watery? Rubbery? pic.twitter.com/AblDzGiRQY

The weight of evidence

University professors and other experts are accorded some presumption of basing their comments on rigorous data and analysis when contributing to public discussion of issues. That trust must be supported by being clear about the basis for statements: What is the quantity and quality of the evidence? Is there presently a scientific consensus? What is opinion versus evidence that has at least passed the basic standard of peer review and publication in a scientific journal?

This controversy started over whether butter is harder at room temperature than it used to be. Although that question has melted away, it’s instructive to trace this story from its start.

Consider the difference in value between replying to a social media post and conducting a formal survey of a representative sample of people. It’s not hard to see how you might get a very different view by asking “Does anyone else think that butter is harder?” or “Please rate your satisfaction with the texture of butter from very dissatisfied to very satisfied,” including an option for “no opinion.”

If we wanted to know if butter is hard or harder than it used to be, we would have to measure it. That is not difficult do, but it has not been done in this case. That might have been the end of it. Astute observations raise questions that research may answer, but without a clear question it is impossible to propose a solution.

In this case, the observation was made that some dairy farmers sometimes feed small amounts (about one per cent of the cow’s diet) of palm-based feed supplements to some of their cows. Presumably because butter is 80 per cent milk fat, this led to speculation that there might be an association between this feeding practice and the consistency of butter. Here, there are some data. And also some muddied waters.

While the terminology is possibly confusing, cow’s milk — like human breast milk — contains palmitic acid, a saturated fat. It’s 30 to 35 per cent of the many different fats in cows’ milk, whether the cows eat any palm-based feeds or not.

Most of what cows in Canada eat is grown on their home farm or locally: corn and alfalfa silage, corn grain and some soybean meal are staples. Dairy farmers set their cows’ diets based on detailed and ongoing analysis and formulation by professional nutritionists. Veterinarians routinely monitor cows’ health, visiting dairy farms for preventive medicine every week or every other week.

Vegetable-based fat supplements may be included at about one per cent of a dairy cow’s total diet to help counter the energy deficit that can occur in early lactation, or to shore up the cow’s energy supply during the heat of the summer. That has been done to meet seasonally fluctuating market demands for butterfat for decades.

Feeding palm-based supplements to dairy cows will change the palmitic acid content of milk to a small degree. There is no evidence of negative health implications for the cows or the people who consume the milk from these cows.

Cows are not fed palm oil itself but palmitic acid supplements, which may come from palm oil or by-products of palm oil processing. There is no evidence that there has been any change in the feeding of palmitic acid. In fact, the evidence based on data on the fatty acid profile of milk from cows in Québec is that the palmitic acid content of milk has not changed over the last year, and data from 2018 showed less than a one per cent difference in palmitic acid content in herds that did or didn’t feed supplemental fat — 33 versus 33.5 per cent.

There is little data on whether or how the details of cows’ diets might affect the properties of dairy food. More research is needed, and is being pursued on several fronts. But based on the available evidence, it is improbable that feeding palm-based supplements has had appreciable effects on the properties of butter.

Not all decisions are, or ought to be, based on scientific data alone. We often have to make decisions in the absence of fulsome evidence, and consider our values as well as hard data. Context helps. Palm oil and its derivatives are used in many foods (check the baked goods, granola bars and hazelnut spread in your pantry, and the margarine in the fridge), cosmetics and biofuels.

There are concerns about the sustainability of palm oil production. Like the coffee, cocoa and forestry industries, there are established international schemes to support sustainable practices in palm production.

Individuals or industries may well make values-based practices and purchasing decisions but they should first consider the best available scientific evidence. Otherwise we’re on a slope more slippery than butter, hard or soft.

Calling leaders who want to grow their future!