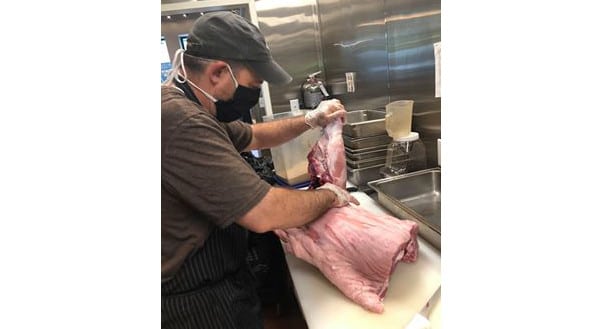 The American Culinary Foundation bought hogs from youth who showed at the Butler County Fair. A network of people helped get those hogs to culinary schools and a nonprofit in the area. Students from Butler Tech Culinary School broke down this carcass. The meat was donated to FreeStore Foodbank. (Courtesy Photo)

HAMILTON, Ohio — While there was a livestock show, of sorts, at the Butler County Fair, fair board members suggested that kids who were showing pigs take their animals home at the end of the fair.

FFA and 4-H members had not been able to take the Ohio Dept. of Agriculture required Quality Assurance Program. Plus, packers are booked for the foreseeable future. Things were not looking bright for show participants.

Andy Korb and his wife, Jessica Dennise, knew the fair board was struggling with the problem. Korb and Dennise had recently bought the Tri-State Livestock Stockyards just north of Oxford. They offered to pay a packer bid for the pigs.

“I could at least offer something to those people who didn’t have anywhere else to go,” Korb said. “I wish we could have offered a little better bid, but that was all I could get because the hog market is so depressed.”

Then Nick Forrest, board member of the American Culinary Foundation (ACF), a former Butler County fair board member and 4-H advisor, brainstormed. It turned into a fantastic story of kindness and generosity, involving a network of people.

At an ACF board meeting, Forrest told the members about the situation at the fair, with kids having to lose money on the hogs they showed. He asked if they would be willing to support the kids.

“We all jumped on it,” said Molly Maundrell, Live Oaks School in Milford Culinary Arts and Hospitality instructor. “We were excited that we would be able to make a difference in helping out these young people. As a board collectively we decided this was a wonderful thing to do and we wanted to support the kids.

“The ACF suggested buying 15 hogs at 25 cents a pound,” Forrest said. “I said I’d find a processor to kill and chill. Then I’d deliver them to the culinary schools around Cincinnati. They can teach students how to process hogs. They can use the meat for new recipes, package the product, and give it to the FreeStore Foodbank. They also gave 300 pounds to La Soupe, a nonprofit that rescues food that otherwise goes into the landfill.

The biggest problem would be getting the hogs killed and chilled. Forrest reached out to Michael Truster, who recently bought the Camden Locker, LLC. He volunteered to help.

“Every slaughterhouse around is booked for years,” Truster said. “He told me what he was up to. I said we could squeeze in some. We were glad to help the 4-H kids have a market. I wish we had had the volume and the capacity to do more. We donated the money back from the kill and chill.”

Korb and Dennise offered to care for the hogs at their farm until Truster could fit them into the schedule.

“La Soupe is a win-win. We keep food out of the landfills, and we help to keep our food supply secure,” said Miranda Maszk, La Soupe executive chef and general manager. “We brought the carcasses in; I had my chefs break them down, made, I don’t even know how many pounds of pulled pork that went out into the community at no charge. It’s a great opportunity for the kids to know that their food went to help feed hungry people.”

Stacy Krause’s daughters, Leah and Lexie, took pigs to show at the fair. Those pigs went to La Soupe.

“They had forewarned us they didn’t have a packer,” Krause said. “What they did was a wonderful thing.”

Morgan Gillespie has shown pigs for several years. He and his family had planned on taking their pigs home.

“We were going to butcher it ourselves and have a hog roast,” he said. “I thought it was pretty cool how everything was going to work out, that it would go to a food bank.”

Added Forrest: “This is a great opportunity for the chefs, the farmers, the kids, the free-store. Everybody is hurting. Things are tight. This meat is not going to be resold. It’s going to go to the free-store.