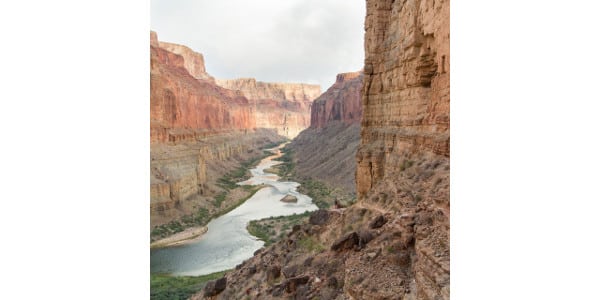 Increasing aridity is already a clear trend across the western United States, where human-caused climate warming is contributing to declining river flows, drier soils, widespread tree death, stressed agricultural crops, catastrophic wildfires and protracted droughts, according to the authors of a Commentary article online published May 19 in Proceedings of the National Academy of Sciences. (Courtesy of CSU)

FORT COLLINS, Colo. — Discussions of drought often center on the lack of precipitation. But among climate scientists, the focus is shifting to include the growing role that warming temperatures are playing as potent drivers of greater aridity and drought intensification.

Increasing aridity is already a clear trend across the western United States, where human-caused climate warming is contributing to declining river flows, drier soils, widespread tree death, stressed agricultural crops, catastrophic wildfires and protracted droughts, according to the authors of a Commentary article online published May 19 in Proceedings of the National Academy of Sciences.

At the same time, such anthropogenic warming is also driving increased aridity eastward across North America, with no end in sight, according to climate scientists Bradley Udall of Colorado State University and Jonathan Overpeck of the University of Michigan.

“The impact of warming on the West’s river flows, soils, and forests is now unequivocal,” write Udall, senior water and climate scientist at the Colorado Water Center, and Overpeck, dean of the University of Michigan School for Environment and Sustainability. “There is a clear longer-term trend toward greater aridification, a trend that only climate action can stop.”

The Commentary article responds to a PNAS paper, published May 11 by Justin T. Martin of the U.S. Geological Survey and his colleagues, that showed how warming is causing streamflow declines in the northern Rocky Mountains, including the nation’s largest river basin, the Missouri.

The Martin et al. study used tree-ring records to analyze the 2000-2010 Upper Missouri River Basin drought and concluded that “recent warming aligns with increasing drought severities that rival or exceed any estimated over the last 12 centuries.”

The study details the mechanisms of temperature-driven streamflow declines, and it “places more focus on how anthropogenic climate warming is progressively increasing the risk of hot drought and more arid conditions across an expanding swath of the United States,” according to Udall and Overpeck.

The Martin et al. study also highlights the way temperature-driven aridity in the West is typically framed in terms of episodic drought. Many water and land managers, as well as the general public, implicitly assume that when returning rains and snowfall break a long drought, arid conditions will also fade away.

But that’s a faulty assumption, one that ignores mounting evidence all around us, according to Udall and Overpeck.

“Anthropogenic climate change calls this assumption into question because we now know with high confidence that continued emissions of greenhouse gases into the atmosphere guarantees continued warming, and that this continued warming makes more widespread, prolonged and severe dry spells and droughts almost a sure bet,” they write.

“Greater aridity is redefining the West in many ways, and the costs to human and natural systems will only increase as we let the warming continue,” Udall and Overpeck write.

Anticipated impacts in the Upper Missouri River Basin mirror changes already occurring in the Southwest, where the trend toward warming-driven aridification is clearest.

Rivers in the Southwest provide the only large, sustainable water supply for more than 40 million people, yet flows have declined significantly since the late 20th century. Declining flows in the region’s two most important rivers, the Colorado and the Rio Grande, have been attributed in part to increasing temperatures caused by human activities, most notably the burning of fossil fuels.

Multiple processes tied to warming are likely implicated in the observed aridification of the West, according to Udall and Overpeck. For starters, warmer air can hold more water vapor, and this thirsty air draws moisture from water bodies and land surfaces through evaporation and evapotranspiration – further drying soils, stressing plants and reducing streamflow.

Frequency of dry spells to increase

But the atmosphere’s increased capacity to hold water vapor also boosts the potential for precipitation; rain and snow amounts are, in fact, rising in many regions of the United States outside the Southwest. However, the frequency and intensity of dry spells and droughts are expected to increase across much of the continent in coming decades, even if average annual precipitation levels rise, according to Udall and Overpeck.

“Perhaps most troubling is the growing co-occurrence of hot and dry summer conditions, and the likely expansion, absent climate change action, of these hot-dry extremes all the way to the East Coast of North America, north deep into Canada, and south into Mexico,” they write.

“Other parts of North America likely won’t see the widespread aridification and decadal to multi-decadal droughts of the West, but will nonetheless continue to see more frequent and severe arid events – extreme dry spells, flash droughts and interannual droughts will become part of the new normal,” according to Udall and Overpeck.

“Unfortunately, climate change and this aridification are likely irreversible on human time scales, so the sooner emissions of greenhouse gases to the atmosphere are halted, the sooner the aridification of North America will stop getting worse.”

Read the Commentary piece, “Climate change and the aridification of North America.”