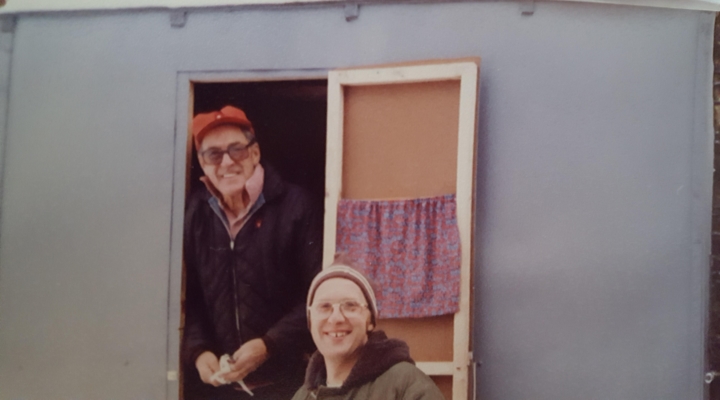 Tis the season to ski….and when I am on the slopes I have someone who is always riding with me, in my heart and just beyond the tips of my skis…

Skiing, always makes me think of a very special day that I had with my Great Uncle, “Bump.”

I was just 18 and he was 82. I got to play hooky from school that day.  Like always, he picked me up early that morning, in the bluish gray cadillac; his pride and joy.   With a thermos of hot cocoa packed in the back, his handkerchief handy, and everything organized just so, we were ready to go…to ski for the day, just he and I.

And what a great day it was…

As children, my sisters and I spent a lot of time up in the White Mountains of New Hampshire with “Bump” and my great-aunt, “Nana Deen.”  It was always fun and filled with laughter.

Usually our trips were in the winter and we would stay at the “Village of Loon” in Lincoln. We would ski during the day, and play in the the pool and hot tub in the evenings. Cheese snacks and ginger ale, Nana Deen’s thermos of hot cocoa and bank lollipops…life didn’t get much better than that.

Bump was cruise director while Nana Deen was comic relief, as we never knew what she was going to say next. Many tears were shed from laughing so hard and giggling ourselves to sleep. I can’t even begin to share the stories.

But, that day, up on Cannon Mountain, in Franconia Notch, it was just me and Bump, and it was very special. Defined by a moment, that will be etched in my mind forever; to this day it is never far away when I am on the slopes, 26 years later.

The sky was clear as a bell, not a cloud in it, and as blue as a robin’s egg. The sun shone bright, and felt very warm for the early January day.

The cold,clear air made me feel alive as the ice crystals sparkled everywhere, clinging to the stunted, high-altitude vegetation, standing no higher than my knee. There was no wind that day, or a very small amount for being so high atop one of New Hampshire’s tallest mountains.

The neighboring high peaks were very crisp in definition and seemed so close; I felt as if I could reach out and touch them. It really was breathtaking.

When we got off the lift, we skied over to the right, and both stood at the trail’s head.  Together, we looked out over the expanse…and breathed in and out.

This was before cameras were so easily accessible on our phones.  Therefore no distraction of trying to save the moment digitally…which truthfully, could never be saved.

It was a moment that could only be captured by memory, the feeling in our hearts, and maybe a knowing.

We both recognized it, and were silent…you could just feel something special and sweet.

That day was the last day that I skied with Bump, and I believe his last day skiing ever. How lucky it was for me to be able to share it with him.  Maybe that is why god gave us that moment together.

Bump spent his life skiing the mountains of New Hampshire.  He was the first tramway inspector in the state, and took a great deal of pride in that position.  Upon his retirement he and Nana Deen were given lifetime free passes to ski all of the NH State ski areas…we used them well as they gave our family many happy memories. 🙂

As the years passed, whenever I saw Bump, he would always talk about that day up on Cannon. “Do you remember that day up on Cannon, Catherine? What a beautiful day… It was just perfect.” I would smile and nod and take a seat and listen to him reminisce about that day. I know the whole family got sick of hearing about it as it became the boring memory for them to listen to that got pulled out every time as he slipped further and further out of the present and into the past.

But I never got sick of it.

That day, it was me and Bump, and all of it.  I can feel it as if it happened yesterday.  The beauty of the view, the poignancy of the moment, and how special it was to ski with Bump.  We were at 2 different ends of life that day, experiencing something that was great, to each of us, in its own way.

Our paths converged on Cannon that day, and for just a moment, they were one.

Keep yourself in check