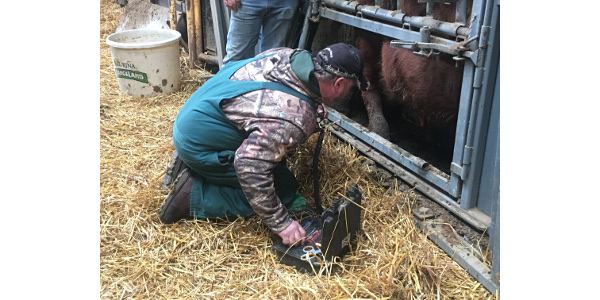 A veterinarian performs a breeding soundness exam on a bull. (NDSU photo)

FARGO, N.D. — Some cattle producers may be frustrated with breeding soundness exams in bulls this spring.

The sperm development cycle in bulls is approximately 60 days long. Depending on the nature of the problem affecting the testes, such as heat, freezing temperatures, stress or infectious diseases, and the severity and length of the problem, semen quality will vary. This means severe frostbite or other injuries that occur in March still may be lingering in May.

“The physical examination is important because bulls with proper structure are more likely to hold up during the rigors of breeding season, compared with bulls with structural problems,” says Lisa Pederson, NDSU Extension beef quality specialist.

Structural problems with feet and legs or movement in general are a big issue because bulls are asked to cover a lot of ground and need to be free of physical problems to breed cows successfully, the specialists note. Bulls will lose body condition during a breeding season, so they must enter the breeding season with adequate condition.

Vision also is an important part of the breeding season for bulls. Seeing the mounting behavior of cows in heat helps the bull identify who is ready to breed from across the pasture.

Evaluation of the reproductive organs is another important part of the breeding soundness examination. The penis, testicles and other internal glands/structures are evaluated. These organs need to be free of injuries or defects for a bull to breed cows successfully.

Sexual maturity in yearling bulls is not complete and will decrease the pass rate in this age group, according to Stokka. A study done by Albert Barth, a professor emeritus in the Department of Large Animal Clinical Sciences at the University of Saskatchewan in Canada, showed 15-month-old bulls with a scrotal circumference of more than 36 cm having a pass rate of only 57 percent.

During a BSE, a sample of semen is evaluated for motility, morphology and concentration.

Motility is the movement of sperm. Ideally, the evaluator should see a rapid swirling movement in the sample. If sperm are not moving in a synchronized manner, they may not be able to navigate through the female reproductive tract to the site of fertilization.

Morphology is the structure of the sperm. Ideally, the sperm will have heads and tails of proper shape. Examples of common defects include tapered or detached heads, and folded or coiled tails. Sperm that has the incorrect structure will not result in successful fertilization. A minimum of 70 percent of the sperm cells need correct morphology for a bull to pass a BSE.

“Just because a bull sired calves last year does not mean he can do it again this year,” Pederson says. “Injuries during the nonbreeding months, as well as effects of extreme cold weather and frostbite, can render once-fertile bulls infertile.”

She recommends producers perform breeding soundness exams close to the time of breeding to ensure the bulls have recovered from winter injuries but far enough in advance of turnout to find new bulls if the BSE identifies fertility problems.

An important indicator of breeding season success is the number of cows a bull is required to breed in a breeding season. The nationwide average is 25 cows per mature bull or 15 cows per yearling bull. Rates of up to 50 cows per bull are used in some systems, but high rates may lead to cows not becoming pregnant on their first heat of the breeding season and subsequently calving late the following year.

One factor the BSE does not evaluate is libido, or willingness to breed.

“This is very important to keep in mind, especially when using young or virgin bulls,” Stokka says. “Young bulls may have all of the qualifications to pass the BSE, but if they aren’t actively breeding cows, producers must find a different option.

“Watch breeding activity closely because catching and correcting problems during the breeding season is much more profitable than waiting for open cows to calve,” he adds.

The year of hay

Horse immunity and biosecurity webinar
May 28, 2020