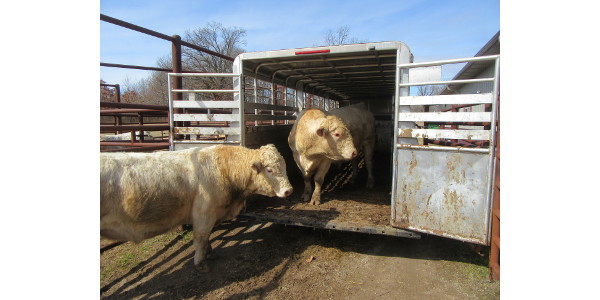 The BSE clinics began in 2005 to focus attention on the value of testing bulls before spring and fall bull turnout. (Photo credit: MU Extension)

The average percentage of bulls that passed the test at each clinic was 91.7 percent.

The BSE clinics began in 2005 to focus attention on the value of testing bulls before spring and fall bull turnout.

“Since we first began the clinics we have seen 3,867 bull examinations and 90.1 percent have been declared by veterinarians to be satisfactory potential breeders,” said Cole.

BSE exams are thorough. The bulls are checked inside and out, top to bottom.

“The one thing that is not evaluated is the bull’s libido and ability to complete the breeding act. Those need to be checked out by the bull’s owner early in the breeding season or even before turnout,” said Cole.

During March, at four different veterinary clinics, 205 bulls were evaluated. Cooperating clinics were Barry County Veterinary Service, Cassville, Countryside Animal Clinic, Aurora, Dake Veterinary Clinic, Miller and the Animal Clinic of Diamond at Diamond. Also, Ed Trotter, Zoetis representative supported the program with parasite control and vaccine, so the bull owners received the exams for about one-half the normal cost of a BSE.

Scrotal circumference averaged 38.5 centimeters with a range from 29 to 50 cm. Stained samples of the semen are viewed under the microscope and the percent normal sperm calculated, the average percent normal was 85.1 percent. The range went from 40 to 97 percent. A bull must have 70% or more normal or they fail the BSE.

“The largest cause for bulls to fail the BSE had a percent normal sperm count under 70 percent. Seven of the 17 bulls had those low levels. Other concerns noted on bulls centered on hoof and mobility problems, a lacerated penis and small testicles,” said Cole.

At each clinic breeds and crosses are identified. Angus was the most popular breed with 40 percent of the 205 bulls being purebred Angus. Their dominance slipped some peaking at 72 percent back in 2009. In second place for popularity at 17 percent were Red Angus, third was Gelbvieh at 12 percent with Charolais at 10 percent. The rarest breed for the clinics was a Highland bull which was a first since the program began in 2005.

“The 205 bulls is a drop in the bucket of the number of bulls that will be used in southwest Missouri and should be given a BSE in the next month. The exams help bunch the spring, 2020 calf crop, help get more calves born early in the calving season and could even prevent a total loss of a herd’s 2020 calf crop due to complete infertility of a bull or bulls,” said Cole.