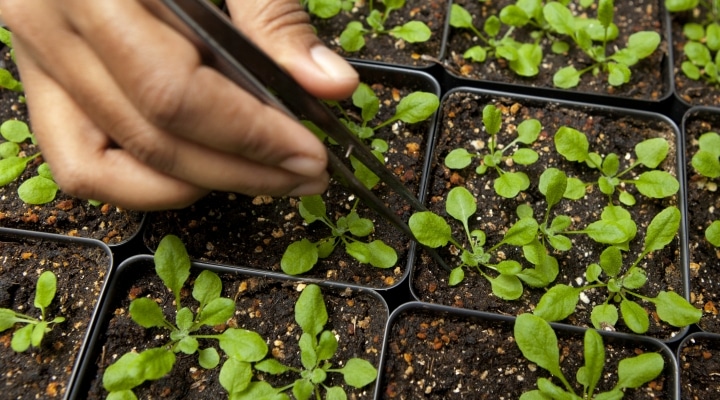 A new study identifies genes that may help plants cope with high temperature stress, setting the stage for developing crops bred for enhanced heat tolerance, said Bala Rathinasabapathi, senior author of the study and a professor in the UF/IFAS horticultural sciences department.(UF/IFAS photo by Tyler Jones)

GAINESVILLE, Fla. — In a warming world, scientists at the University of Florida are looking for ways to help crops beat the heat.

A new study identifies genes that may help plants cope with high temperature stress, setting the stage for developing crops bred for enhanced heat tolerance, said Bala Rathinasabapathi, senior author of the study and a professor in the UF/IFAS horticultural sciences department.

Some plant species are more sensitive to heat than others. But when temperatures rise above what a species can typically withstand, the plants become stressed, often producing smaller yields, Rathinasabapathi explained.

“Our program has been studying how plants respond to high temperature stress and designing new ways to improve the tolerance levels of crops. When we placed plants under controlled conditions and increased the temperatures, we noticed that young leaves were affected much less than older leaves,” Rathinasabapathi said.

“This observation prompted us to question the cause of such a difference,” he added. “We rationalized that if we could identify the genes that are involved in young leaves’ tolerance to high temperature stress, it will provide testable ideas to improve heat stress tolerance of crops.”

In the experiment, study co-author Qingyuan Xiang, a Ph.D. student in Rathinasabapathi’s lab during the study, tested how the plant Arabidopsis thaliana changes its gene expression in response to extreme heat. Arabidopsis is often used in the plant sciences because it grows relatively quickly and its genetics are well understood, making it a good candidate for experiments aiming to understand plants’ genetic response to different environmental conditions.

In the tests, the scientists exposed some Arabidopsis plants to high heat — 107.6 degrees Fahrenheit — while others were placed in more typical non-stress conditions. After one hour under high heat, the researchers took samples of the plants’ young and old leaves and repeated the process again after 10 hours. The scientists then analyzed gene expression patterns in young and old leaves.

By sampling at different times, the researchers were able to see how gene expression progressed in the young leaves compared with older leaves. They also compared those patterns to those in plants not exposed to heat.

Gene expression occurs when a specific portion of DNA is activated in a specific part of that organism under specific conditions, Rathinasabapathi said. Plant breeders look to gene expression for clues about which genes play a role in different scenarios — such as extreme heat — in the hopes of developing plants with genetic traits that allow them to perform better in those scenarios.