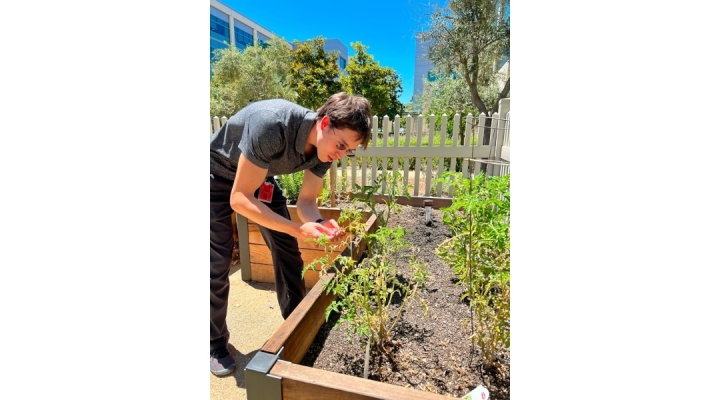 SAN DIEGO CO., Calif. — What do University of California Agriculture and Natural Resources and the sports entertainment reality television show, “American Ninja Warrior,” (ANW) have in common? That would be Eric Middleton, also known as the “Bug Ninja” to fans of the show, which follows competitors as they try to navigate a grueling obstacle course.

Middleton describes himself as a “full-time entomologist and part-time ninja warrior.” When he is not training for ANW, Middleton works as an integrated pest management (IPM) advisor for University of California Cooperative Extension in San Diego County.

“Broadly, I like to think of IPM as increasing your knowledge and diversifying your tools so that you rely on pesticides a lot less for conventional agricultural practices,” he explained.

Middleton’s own background is anything but conventional. His popularity on the hit TV show can largely be attributed to his unique culinary tastes in insects. During season 10 of ANW, Middleton struck a deal with the show announcers, Matt Iseman and Akbar Gbaja-Biamila, claiming that if he completed the obstacle course, the pair would have to eat an insect of his choosing.

Spoiler alert: Iseman and Gbaja-Biamila did have to eat tempura-fried tarantula and scorpion thanks to Middleton, who says that he has also tried the two delicacies.

A part of his backstory on ANW includes b-roll of Middleton prepping and eating his favorite – a tempura-fried tarantula. During his on-camera interview, he explained that insects offer nutritional value and can be a viable source of protein when countering climate change’s effect on food sources.

Studying bugs and becoming an entomologist was not a career path Middleton always had in mind. Rather, it was a realization that became more apparent the more time he spent with his mother.

“I grew up in Utah. My mom is a geologist, and I spent a lot of time with her out in the field,” he said. “She was always looking at rocks. Rocks aren’t the most interesting to me so I would find things more interesting to look at, like bugs.”

It was not until he began college that Middleton decided he would become an entomologist. “I really wanted to learn more about the natural world, and insects are a good way to do that because they’re so involved in natural processes and ecosystems,” he explained.

One of Middleton’s fondest memories while attending the University of Minnesota is when he designed and taught an undergraduate course on insect warriors. Middleton wanted a course that would “engage undergrads in a way that would get them interested in entomology.”

Leveraging his stardom from ANW, Middleton based the course on how insects were used in warfare. Students who took the course were intrigued and genuinely wanted to learn why insects make such formidable warriors or athletes.

While working as a postdoctoral fellow at the University of Florida’s Citrus Research and Education Center in Lake Alfred, Middleton focused on developing management options for the Lebbeck mealybug in Florida citrus.

Now that he has relocated to San Diego, Middleton expressed excitement for the diversity that comes with living in southern California, which includes working with citrus, floriculture, avocado growers, small farms or all the above.

“What’s really interesting about working with UC ANR is the fact that you could work with almost anything you want,” he explained. “It also provides a great opportunity to do research that’s applicable and impactful to a diverse group of people.”

One of the challenges that Middleton is already mindful of is prioritizing needs. Floriculture and nurseries, for example, face many challenges. Given that they are two of the biggest industries in the area, focusing on them alone can lead to other aspects becoming more neglected.

When asked how he plans to address the challenges ahead, Middleton said that it all comes down to intentionality and, ideally, conducting research that becomes standard practice. One of Middleton’s goals is to essentially identify pest management practices that are beneficial for the environment.

“It’s broad, but I’d really like to make regenerative agriculture, ways of producing food or other commodities, more sustainable,” he said.

Meanwhile, he continues to build momentum for his work from his participation in ANW – using the platform to challenge people’s perspectives about the natural world and applying his ninja skills to overcome obstacles that California growers face.

If you cannot find Middleton in the office or field, try tuning into the latest season of ANW. His results are still under wraps, but the nation will find out just how determined the “Bug Ninja” is soon enough.

Middleton is based out of the UCCE office in San Diego and can be reached at egmiddleton@ucanr.edu.