Home » Buckwheat Honey is back in stock 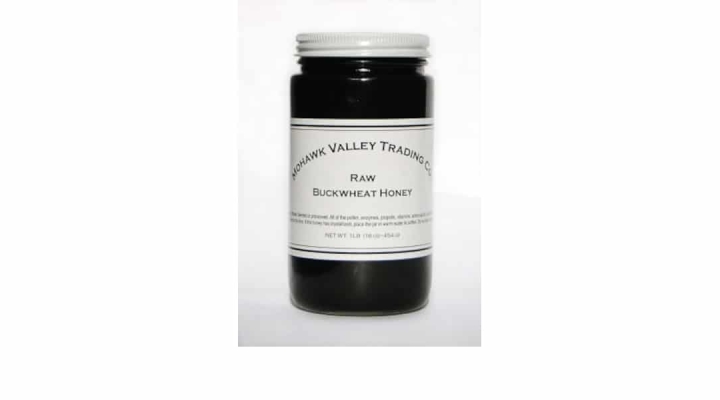 Raw buckwheat honey from the Mohawk Valley Trading Company has not been heated, filtered, blended or processed. All of the pollen, enzymes, propolis, vitamins, amino acids, antioxidants, minerals and aromatics are in the same condition as they were in the hive.

UTICA, N.Y. — After a lengthy hiatus, raw buckwheat honey is back in stock at the Mohawk Valley Trading Company.

What is Buckwheat Honey?

The flavor and color of honey is determined by the type of flower the bees gather the nectar from, therefore, honey is usually classified by the floral source of the nectar from which it was made.

Monofloral honey or varietal honey is made primarily from the nectar of a particular type of blossom or flower resulting in a distinctive flavor and color because of differences between their principal nectar sources. To produce monofloral honey, beekeepers keep beehives in an area where the bees have access to only one type of flower.

Buckwheat is neither a grass nor wheat, but is a fruit related to rhubarb and is one of the first crops cultivated in the United States. Dutch colonists brought buckwheat to North America where they planted it along the Hudson River. Buckwheat was sometimes called beechwheat, because its seeds look like small beech nuts. Buckwheat seeds are also used or making gluten free flour.

Buckwheat is mainly grown in the northern hemisphere, especially in countries such as Kazakhstan, Russia, China and Central and Eastern Europe.

Buckwheat was an important crop in the U.S. until the demand declined in the 1960’s. Today, it is primarily grown in Northern states such as New York and it has become popular among health-conscious people due to being gluten free and its high antioxidant and mineral content. Buckwheat blossoms are an excellent source of nectar for pollinators and blooming can continue well into the autumn.

Buckwheat can thrive in poorly drained, infertile soil and is quite well suited for hardscrabble land.

Buckwheat hulls are used as filling for pillows and zafu. The hulls are durable and do not conduct or reflect heat as much as synthetic fills and they are an excellent substitute to feathers for people with allergies. However, buckwheat pillows made with uncleaned and unprocessed hulls contain high levels of allergens that may trigger an asthma attack in those who are at risk.

According to Dr. Tasneem Bhatia from the Atlanta Center for Holistic and Integrative Medicine. One of the natural remedy solutions she recommended is taking 1 to 2 teaspoons of buckwheat honey every day.

“Buckwheat honey should be a part of every winter medicine cabinet,” said Dr. Bhatia “and here is why—it’s high in antioxidants and it really has a lot of immune boosting properties. Ideally the buckwheat honey has a darker, richer flavor, it’s a little bit like molasses…this particular honey can keep you healthy throughout the winter.”

Raw buckwheat honey from the Mohawk Valley Trading Company has not been heated, filtered, blended or processed. All of the pollen, enzymes, propolis, vitamins, amino acids, antioxidants, minerals and aromatics are in the same condition as they were in the hive.

Learn how to teach tractor safety to youth