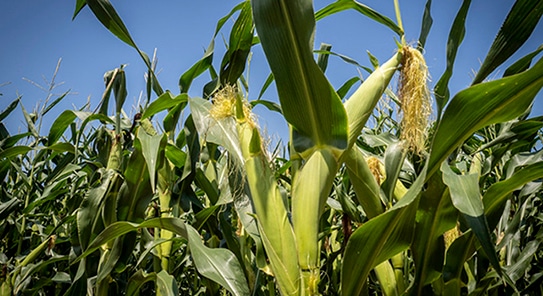 A new major meta-analysis has found that Bt corn does not damage nontarget organisms. (Preston Keres)

MARICOPA, Ariz. — The largest, highest quality analysis of data ever conducted reveals that genetically modified Bt corn has little impact on nontarget insects and other organisms, especially compared to growing conventional corn. This study was published June 6 in Environmental Evidence by a USDA Agricultural Research Service scientist and his Swiss colleagues.

Bt corn is corn that has been genetically modified so that it produces proteins from the bacterium Bacillus thuringiensis to control corn borers, corn rootworms and other major pests of corn. The first Bt corn was approved in 1996 and critics have been suggesting that it also can destroy beneficial insects or other non-targeted organisms.

One of the issues with assessments of possible nontarget organism damage by Bt corn has been that each study was limited in scope, environment or size. The paper’s three authors have made up for these shortfalls by systematically pulling together data from studies in 12 bibliographic databases, 17 specialized webpages, and the reference sections of 78 review articles that all met the highest standards for research quality.

“We gathered together hundreds of individual studies published between 1997 to 2020 that have looked at whether growing Bt corn changed the environmental abundance of non-target animals such as arthropods, earthworms and nematodes, especially as compared to growing non-genetically modified corn accompanied by the pesticide necessary to control major pests,” explained ARS entomologist Steve Naranjo, director of the Arid-Lands Agricultural Research Center in Maricopa, Arizona and one of authors of the study.

Naranjo and entomologists Joerg Romeis and Michael Meissle with Agroscope, ARS’ Swiss counterpart, found that this massive aggregation of data showed Bt corn had no negative effects on most invertebrate groups including ladybeetles, flower bugs, and lacewings. Populations of Braconidae insects, which are parasitoid wasps that prey on corn borers, were reduced with Bt corn.

The researchers even examined if authorship or financial support by biotechnology companies affected the outcome of individual studies.

“It might be a bit surprising but according to the analysis, when any negative effects by Bt corn on nontarget organisms were found in the data, they were attributed more often in studies with private sector support than when no backing by biotech companies was declared,” Meissle added.

“But after all the number crunching was done, what we found was that, overall, Bt corn just does not have negative impacts on nontarget organisms,” said Naranjo.

The quality standards for which studies would be included in the meta-analysis and which would be cut were outlined and vetted by stakeholders, scientists not involved in the meta-analysis project and even members of the journal’s review board, none of whom knew if any study’s data showed a negative impact on non-target organisms or not.

The result is the largest pool of high-quality data anyone has ever analyzed for this purpose consisting of 7279 individual invertebrate records from 233 experiments in 120 articles, 75 percent of which were from peer-reviewed journals. The entire data set also has been published in BMC Research Notes.

In summary, this major meta-analysis largely proved out previous individual studies. Bt corn represents a highly selective pest control technology with relatively few negative consequences for non-target invertebrates, especially when compared with the use of broad-spectrum insecticides for managing Bt-targeted pests, according to the scientists.