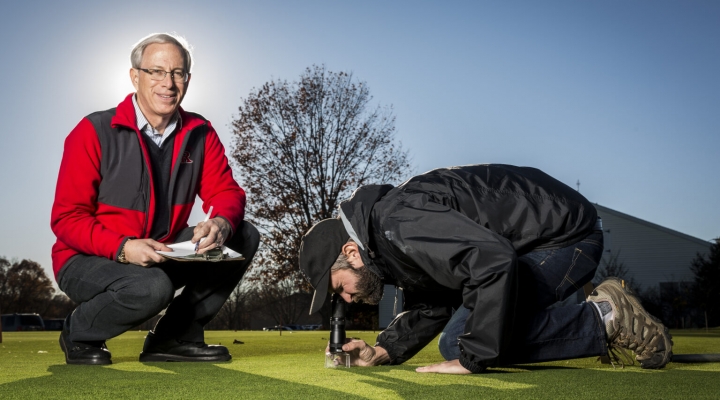 Bruce Clarke, extension specialist in turfgrass pathology in the Department of Plant Biology, retired on January 1 after almost 40 years of dedicated service to Rutgers University and the turfgrass industry. Clarke (CC ’77, GSNB ’82) started his education at Rutgers in 1973 as an undergraduate in the first matriculating class of Cook College, now the School of Environmental and Biological Science (SEBS).  He earned bachelor’s degree in forest management and, after receiving his doctorate from Rutgers in plant pathology, joined the faculty as an assistant extension specialist in 1982. (Photo credit: Steve Boyle/Courtesy of U.S. Golf Association, via Rutgers University)

NEW BRUNSWICK, N.J. — Bruce Clarke, extension specialist in turfgrass pathology in the Department of Plant Biology, retired on January 1 after almost 40 years of dedicated service to Rutgers University and the turfgrass industry. Clarke (CC ’77, GSNB ’82) started his education at Rutgers in 1973 as an undergraduate in the first matriculating class of Cook College, now the School of Environmental and Biological Science (SEBS).  He earned bachelor’s degree in forest management and, after receiving his doctorate from Rutgers in plant pathology, joined the faculty as an assistant extension specialist in 1982.

Clarke served in multiple leadership roles in Rutgers Cooperative Extension (RCE) and the New Jersey Agricultural Experiment Station (NJAES). After one year in an interim capacity, he was named director of the Center for Turfgrass Science in 1994 and served in that position until the end of 2020. Under Clarke’s leadership, the Rutgers Turfgrass Program added 11 new faculty and gained international recognition as a center of scientific and educational excellence. One of the keys to his success as center director was his ability to forge productive collaborations. With the help of his colleagues and the turfgrass industry, he raised more than $12 million dollars to support research, teaching and outreach activities in the center, as well as more than $2 million dollars for student scholarships.

In addition, Clarke served as the chair of the Department of Plant Pathology at Rutgers from 1999 to 2001, and later as vice chair of the department, then renamed Plant Biology, from 2001 to 2011. He then served a second stint as department chair from 2011 to 2014, where he worked with his colleagues to restructure the large and diverse group of more than 50 faculty. Clarke also served his academic profession with distinction as president of the Northeastern Division of the American Phytopathological Society from 1999 to 2000, a member of the Board of Directors of the International Turfgrass Society (ITS) from 2001 to 2009 and ITS president from 2013 to 2017.

The late Ralph Geiger, a strong supporter of the Rutgers’ Turfgrass Program, generously provided funds to create an endowed chair in turfgrass science at SEBS in 2005. Clarke was the first occupant of the Ralph Geiger Endowed Chair in Turfgrass Science until 2011.

Widely recognized as a world authority in the field of turfgrass pathology, Clarke dedicated his career to providing practical, science-based solutions to problems in the turfgrass industry. He authored or co-authored 90 refereed journal articles, more than 200 industry publications and garnered more than $20 million in grants and contracts to support his research and outreach programs. He also co-edited four books, including the second, third and soon-to-be-released fourth edition of the Compendium of Turfgrass Diseases, one of the most widely read publications in turfgrass pathology. Clarke’s research and extension programs focused on the identification and control of turfgrass diseases as well as the development of best management practices to reduce fungicide use. His work on the biology and control of anthracnose, summer patch, dollar spot, and gray leaf spot diseases are cited as some of the most important achievements affecting the playing conditions of golf courses and sports fields worldwide.

It could be said the niche that Clarke filled in the turfgrass industry was one of “Jersey Roots, Global Reach,” having presented his research in all 50 states and more than 20 countries over the past 40 years. Moreover, his love of teaching was well-known. Clarke taught an impressive number of courses in turfgrass pathology and disease diagnostics at the undergraduate, graduate and continuing professional education levels. His students, who received more than 50 state and national research awards while at Rutgers, benefited greatly from his advice and have gone on to successful careers as leaders in academia, government and private industry.

Clarke has been recognized with many significant career accolades. He was elected Fellow of the American Society of Agronomy (2004) and the Crop Science Society of America (CSSA; 2006) and received the USGA Green Section Award (2016) from the United States Golf Association, the Grau Turfgrass Science Award (2016) from the CSSA, and the Col. John Morley Distinguished Service Award from the Golf Course Superintendents Association of America (2014) in recognition of distinguished service to the turfgrass industry. In addition, he was recognized for his contributions to research and teaching with the Specialist of the Year Award from RCE (2020), Outstanding Professor of the Year Award from the Graduate Student Association in the Department of Plant Biology (2007) and the Hall of Fame Award from the New Jersey Turfgrass Association (1996).

Clarke’s plans for retirement include more leisure time with his family and first grandchild, however he will continue his dedication to Rutgers and the turfgrass industry by continuing to serve on the graduate committees of several former student advisees, fundraising for the Center for Turfgrass Science and teaching in the Rutgers Professional Golf Turf Management School’s Two-Year Certificate Program run by the Rutgers Office of Continuing Professional Education. He also is looking forward to traveling and continuing his turf consulting activities throughout the world.

Listen to the “Extension Icons with Dr. Bruce Clarke” episode of the Extension 360 podcast

While Clarke’s accomplishments are a testament to his distinguished career, the high regard from his colleagues and students reflect his integrity as a teacher, researcher and professional. His collegial bonds extend to industry partners as well, whom he considers his “extended family.” Several colleagues shared their sentiments, below:

I have worked in the turfgrass industry going on 43 years. First as a university faculty member at Iowa State University and for the past 28 years as a field technical manager for Syngenta Professional Solutions. My interactions with Bruce Clarke began when I moved to the east coast from Iowa. I immediately found Bruce to be genuine in all that he does. Besides contracting with Bruce to conduct important studies in the development of new fungicides, I began to spend more time volunteering on committees and providing support where needed. Out of this grew a true friendship with Bruce that still flourishes to date. Bruce has proven to be the best at what he does in research and more importantly an individual respected by all. We at Syngenta are proud to pledge a donation of $100,000 towards an endowment in Bruce’s name.—Mike Agnew, Syngenta Professional Solutions

Bruce combines the qualities of an exceptional researcher with selfless dedication to outreach and outstanding commitment. His leadership at Rutgers University has motivated a team of scientists across all disciplines that has resulted in a program that is improving turfgrass conditions around the globe.—Kimberly Erusha, former managing director, USGA Green Section

Dr. Clarke is the most dedicated teacher and extension person I have ever known. His students are all leaders in the turf industry and Universities. It has been my honor to work with him as a colleague and friend. Bill Meyer, former associate director Center for Turfgrass Science and director of Turfgrass Breeding

Bruce’s achievements in turfgrass pathology and the dedication and contribution to Rutgers Center for Turfgrass Science are hard to be matched. He has inspired and set examples around him that excellence is something to aim for no matter what we do. Congratulations on the wonderful career and retirement!—Bingru Huang, Distinguished Professor in the Department of Plant Biology

Dr. Clarke has that uncanny ability to relate to and connect with whomever he meets. His communication skills are outstanding in all situations: one-on-one, small groups or large audiences. He can communicate with persons of any background, and he is just as effective listening as he is speaking. Numerous golf course superintendents, USGA agronomists and academic peers consider Dr. Clarke a friend as much as they do a colleague. They trust him and frequently seek his advice and counsel. He is selfless with his time and works tirelessly to serve any member of the golf course industry as well as students and colleagues.—Jim Murphy, extension specialist in turfgrass management

I am extremely grateful to have been mentored by Bruce for both my master’s and doctorate degrees. Having the opportunity to learn and grow from a world-renowned turfgrass pathologist was an incredibly special experience that I will never forget. Not only was Bruce a great educator, but he was a supportive, encouraging advisor and a true advocate for his students. Bruce would often say that his greatest joy was seeing his students be successful and I truly believe this to be the case. I will always be thankful to Bruce for helping shape me into the scientist and researcher I am today.—Lisa Beirn, Research & Development Scientist, Syngenta

Bruce Clarke’s career in Rutgers Cooperative Extension sets a high standard for what it means to be a successful extension specialist. He built a career as an internationally recognized turf grass pathologist and a strong leader within the industry. He is a deeply respected colleague within RCE and his accomplishments are surpassed only by his humility and an untiring devotion to serving the needs of the industry. He stands as a model to all within cooperative extension.—Brian Schilling, director, Rutgers Cooperative Extension

Upon Bruce’s retirement, Brian Shilling asked Bruce for his recipe for success and Bruce said he did not have one—actually, that is not true. I have known Bruce since we started as freshman in September 1973. For almost 50 years Bruce has been a committed and steadfast presence at Rutgers. He is a genuinely decent person who puts service above self. He is very nurturing of his students and very supportive of his co-workers. He worked hard to understand the needs of his constituents and delivered meaningful, relevant and practical solutions to problems related to turf and ornamental disease prevention and control. In graduate school Bruce and I had a superb role model in Dr. Spencer H. Davis, one of the best teachers, mentors, and extension specialists at Rutgers. Dr. Davis set a very high bar for quality extension and teaching. Bruce exceeded the high standard Dr. Davis set many years ago. We are all better for having worked with Bruce Clarke, and I am honored to have him as a longtime friend and colleague.—Mark Robson, Distinguished Professor of Plant Biology