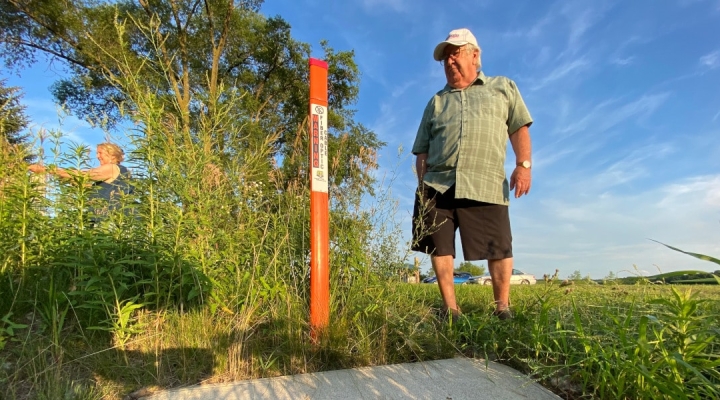 Richard Rolfsmeyer and his wife Marilyn were connected to high-speed internet service 10 years ago at their home near Hollandale in Iowa County, but that connection was never activated, and they have lived with slower service since then. The couple recently was able to access high-speed internet when fiber optic cable was installed along the highway next to their home. (Julian Emerson, Wisconsin Farmers Union)

CHIPPEWA FALLS, Wis. — Ten years ago Richard and Marilyn Rolfsmeyer were excited at the prospect of being linked to the real world via a high-speed internet connection.

Like many people living in the mostly rural Driftless Area that comprises southwest Wisconsin, the couple got by with relatively slow internet speeds. Scrolling the internet often occurred at a snail’s pace or was intermittently interrupted. Seemingly simple acts such as watching videos via their computer were often a struggle as well.

However, the Rolfsmeyers didn’t join the information superhighway. Their internet provider at the time, Frontier Communications, never activated the high-speed internet connection after linking it to the couple’s home. So the Rolfsmeyers, like many in Wisconsin’s rural regions, have continued without quality internet.

“It comes and goes,” Richard said of the intermittent line-of-sight internet signal to the couple’s home near Hollandale amid the rolling hills of Iowa County. “And we’re lucky. We live on top of a hill. Most of the people in the valleys barely get any internet at all.”

When a tree grew and blocked the signal from Hollandale’s water tower to their home, the Rolfsmeyers were forced to reposition an antenna atop their house so they could continue to receive internet service. But they know that isn’t a long-term solution to being able to access broadband.

Iowa County isn’t alone among Wisconsin communities struggling to connect to high-speed internet. The state’s rural areas are especially in need of such connections, several studies have shown.

Last year, state officials estimated about 400,000 state residents, most of them in rural areas, lacked broadband access. But earlier this year the Wisconsin Public Service Commission (PSC) gathered its own figures and said about 650,000 people are without home internet access of at least 25 megabit-per-second (Mbps) download and 3 Mbps upload speed, adequate to stream video or participate in online meetings.

Another 650,000 or so people in the state’s rural and urban communities lack access because they can’t afford to pay for it, the PSC said.

The broadband shortage continues despite significant efforts to address it. Since 2014, an estimated $1.4 billion in government money has been spent on broadband expansion in Wisconsin. Yet many people across the state still struggle to perform simple tech tasks such as uploading a video or conducting a Zoom meeting because of slow or unreliable internet service.

In much of northern Wisconsin, internet access is slow or simply not available at all, said Brittany Beyer, executive director of the Grow North Regional Economic Development Corporation and a member of Gov. Tony Evers’ Task Force on Broadband Access. Areas that are sparsely populated face financial challenges expanding high-speed internet because of its high cost per household, making providers less likely to install it.

That lack of connectivity often leaves the state’s rural regions behind their urban counterparts, Beyer said. For instance, during the coronavirus pandemic, when Wisconsin schools suspended in-person classes, students attending many rural schools struggled to access online homework assignments. In some communities parents drove their children miles to locations with internet access so they could complete homework assignments.

In Vilas County and other locations, increased population during summer months in the Northwoods stresses existing broadband bandwidth, meaning service is slow or intermittent. Likewise, people report that large music festivals such as the Hodag Country Festival in Rhinelander stress available internet in surrounding areas.

“Summer and winter populations are very different in much of northern Wisconsin,” Beyer said. “There is a need to build flex in the system to accommodate the ebb and flow of that (population) size. We just don’t have the capacity for that.”

Attracting economic development also is hindered because of insufficient internet, Beyer said. As industry and farming becomes increasingly automated, and more work is being done remotely, providing high-speed broadband is becoming a necessity, she said.

“If you want to bring businesses to your area, if you want to retain and attract new people, you have to provide high-speed internet,” Beyer said. “And right now the rural areas are not on an even playing field.”

Kati Ann Dussl knows that all too well. Dussl, who works as a case manager for a nonprofit agency JusticePoint, said she rarely can access the internet from her home 10 miles east of Spooner, making working from there virtually impossible. She has better broadband connectivity at a cabin she owns nearby, and sometimes heads to Hayward, a nearly half-hour drive, to link to the internet.

“I can’t get anything done, really, at home,” she said, noting many people living near her similarly lack internet connectivity.

Despite challenges, Beyer said she is excited about broadband expansion that is occurring at a rapid pace this summer across Wisconsin, thanks in large part to government funding available through the American Recovery Plan Act (ARPA) and federal infrastructure funding approved in November by Congress, also known as the Bipartisan Infrastructure Legislation (BIL).

ARPA funds, combined with local government money and dollars from private citizens and telecommunications companies, are paying for many broadband expansion projects occurring across Wisconsin this summer. Details of broadband expenditures that are part of the $1 trillion BIL are still being worked out, and that pot of money will help pay for high-speed internet connections in upcoming years.

“In so many communities throughout Wisconsin, work crews are out there burying cable, installing the network,” Beyer said. “We’re in a vastly different place than a year ago. There is a lot of excitement out there about broadband.”

That sense of enthusiasm extends to Iowa County, which has partnered with three internet service providers to expand broadband in a region where it is especially lacking. Such partnerships are critical to combining resources to reach as many people as quickly as possible, said Barry Hottmann, the county’s community development educator with UW-Madison Division of Extension.

Among those projects are one the Iowa County Board recently approved for an $8.5 million broadband expansion in the county’s northeast section. Another is a project in which Mount Horeb Telephone Company is teaming with Alliant Energy to provide high-speed internet to Hollandale and the surrounding area, including to the Rolfsmeyers’ home.

Partnerships like those in Iowa County are happening in other parts of the state, Beyer said, and will be crucial to effectively growing broadband connections across rural Wisconsin. Many small municipalities lack the resources to even apply for available broadband grant funding, she said.

Regional economic development organizations like Grow North are helping plan broadband expansion, she said. The broadband task force has issued a second report, this one about helping ensure that federal broadband dollars get to the places where they are most needed and conform with federal guidelines.

“That shift still needs to happen,” Beyer said. “There is a ton of work right around the bend. We cannot be complacent just because the federal dollars are coming … We have to continually get organized to take advantage of this situation.”

While Iowa County has made broadband expansion a focus point since 2019, continued efforts are needed to ensure ongoing connectivity, Hottman said. Those endeavors must be nimble and able to address the varied situations to best connect residents to service, he said.

In some cases, he said, alternatives to providing everyone with high-speed cable may be needed. But as many people as possible need to be connected to quality internet service, he said, noting that remote work capabilities provide an opportunity for rural communities to attract people.

Hottmann sees that potential in Dodgeville, the city where he resides. The Iowa County seat, a city of about 5,000, has a picturesque main street and is home to Wisconsin’s oldest county courthouse.

Many people living in Iowa County and the surrounding community travel to and from Madison for their jobs, but some say they would prefer to live in rural communities and work remotely if they could connect to broadband, Hottmann said.

“With the pandemic, more people are looking to get out of heavily populated areas. They love the outdoor amenities,” Hottmann said. “But they also need to have a job. And they’d better have a good internet connection. If we can offer that in Iowa county, I guarantee that we will see growth.”

Richard Rolfsmeyer agrees. As a former Pecatonica School Board president and current Iowa County Board supervisor, he has seen the importance of broadband in a community where too many lack it. Students in his area struggled to complete school work when classes were disrupted during the coronavirus pandemic, he said, and attracting businesses to the region he calls home has become increasingly challenging amid internet access concerns.

“These days it’s hard to sell your house if you don’t have high-speed internet,” he said. “That’s one of the first questions people ask when they’re considering buying a home now.”

The Rolfsmeyers aren’t looking to move anytime soon. On a recent warm summer evening they enjoyed the yard at the property they have called home for the last 42 years, as their five pet peacocks strolled nearby.

“We moved here because we wanted our kids to grow up with this kind of life,” Richard said, “and then we just decided to stay. Now our staying here will be a little easier with getting broadband.”

Emerson lives in the Chippewa Valley and is the Communications Specialist for Wisconsin Farmers Union. This is part of a series of articles focused on rural infrastructure investment in the state that are being produced through WFU’s Rural Voices project. He can be reached at jemerson@wisconsinfarmersunion.com.