Home » Bringing out the best in wild birds on farms 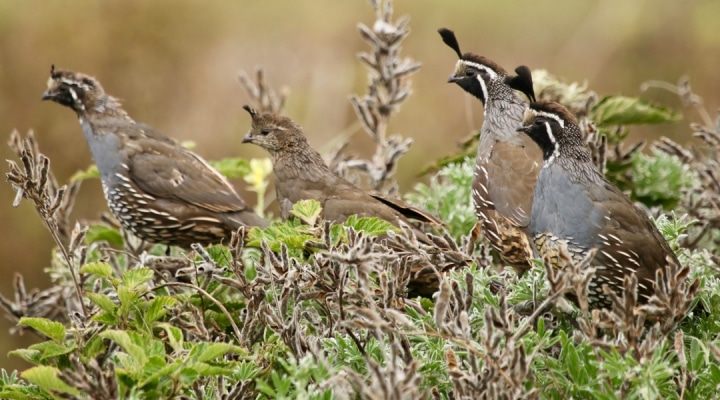 California quail tend to offer more benefits to strawberry farmers than disservices, according to a UC Davis study's "multifunctionality index" of birds commonly found on the farms. (Danny Karp/UC Davis)

DAVIS, Calif. — A supportive environment can bring out the best in an individual — even for a bird.

After an E.coli outbreak in 2006 devastated the spinach industry, farmers were pressured to remove natural habitat to keep wildlife — and the foodborne pathogens they can sometimes carry — from visiting crops. A study published today from the University of California, Davis, shows that farms with surrounding natural habitat experience the most benefits from birds, including less crop damage and lower food-safety risks.

The study, published in the Journal of Applied Ecology, was conducted at 21 strawberry fields along California’s Central Coast. It found that birds were more likely to carry pathogens and eat berries without surrounding natural habitat.

The authors said a better understanding of the interplay of farming practices, the landscape, and the roles birds play in ecosystems can help growers make the most out of wild birds near their fields.

“Bird communities respond to changes in the landscape,” said lead author Elissa Olimpi, a postdoctoral scholar in the UC Davis Department of Wildlife, Fish and Conservation Biology at the time of the study. “As birds shift in response to management, so do the costs and benefits they provide.”

The single most important driver

The study looked at how different farming practices influenced the costs and benefits that wild birds provided on the strawberry farms. The scientists combined nearly 300 bird surveys and the molecular analyses of more than 1,000 fecal samples from 55 bird species to determine which birds ate pests, beneficial insects and crops, and carried foodborne pathogens.

They also ranked birds to see which were more likely to bring benefits or costs to farmlands. Barn swallows, for instance, got a “gold star” in the study, Olimpi said. Their mud nests are commonly seen clinging to the underside of barn eaves, from which they fly out to swoop over fields, foraging on insects.

But rather than resulting in a list of “good” and “bad” birds, the study found that most bird species brought both costs and benefits to farms, depending on how the landscape was managed.

The presence of natural habitat was the single most important driver differentiating a farm where wild birds brought more benefits than harm.

“Nature is messy, and birds are complex,” Olimpi said. “The best we can do is understand how to take advantage of the benefits while reducing the harms. Growers will tell you it’s impossible to keep birds off your farm — you can’t do that and don’t want to from a conservation perspective. So how can we take advantage of the services birds provide?”

Win-wins for birds and farms

The study is one of several publications from UC Davis Professor Daniel Karp’s lab highlighting the environmental, agricultural, and food safety impacts of conserving bird habitat around farms. A related study in 2020 found that farms with natural habitat attracted more insect-eating birds — and fewer strawberry-eating birds — so that farmers experience less berry damage on farms with more habitat nearby. Such habitats also bring greater numbers of bird species to the landscape.

“All together, these studies suggest that farming landscapes with natural habitat tend to be good for conservation, farmers, and public health,” said Karp.

The research was funded by the USDA and UC Davis Department of Wildlife, Fish and Conservation Biology.