Home » Bringing barley back: Virginia Tech is partnering with public and private stakeholders 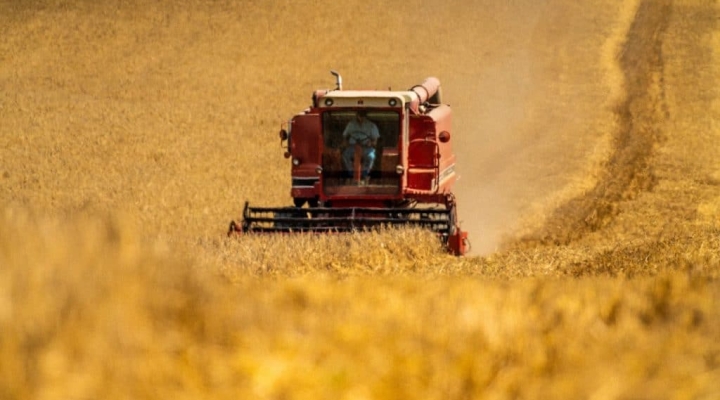 Calypso barley is harvested in Lee County, one of three counties in far Southwest Virginia that is currently growing malting-quality barley on behalf of Project Thoroughbred. (photo courtesy of Appalachian Grains& Virginia Tech)

Will Payne and Will Clear didn’t hesitate. They knew exactly where and who to turn to when it came to tackling what they called a “big idea project,” one they knew could impact the lives of thousands of Virginians.

About four years ago, the pair — Payne of Coalfield Strategies and Clear of the Virginia Department of Energy — visited Virginia Tech with a complex question that has for years bounced around the agriculture industry: “Knowing the farming legacy in Southwest Virginia, how can we build on that legacy and find a way to attract young farmers to the region?”

Ideas danced around the sturdy metal table at which the men gathered outside The Inn at Virginia Tech one sunny summer afternoon. They discussed the state’s – and the university’s – rich agricultural past. And they discovered potential, and a possible solution, for its future.

They call it Thoroughbred. Not the horse, but a barley variety developed by Virginia Tech researchers in the School of Plant and Environmental Sciences. Originally targeted toward horse owners, Thoroughbred was later tested for its malting quality.

“Call it luck or just skilled outcome, but the genetics of this variety combined in a very beneficial way. We produced an incredible barley that had malting quality,” Thomason said.

Could Thoroughbred be the answer Payne and Clear were searching for? Could a happenstance barley variety, quietly yet fervently waiting in a lab at Virginia Tech, help invigorate and diversify the commonwealth’s largest private industry? Could Southwest Virginia be a key part of the state’s growing craft beer industry?

From summer’s blessings of sweet iced tea to a refreshingly hazy IPA, every beverage has a backstory, a recipe full of ingredients that come together to make it tasty – to make it a success.

The same goes for every bold endeavor, and in Project Thoroughbred’s case, it is a team of public and private stakeholders, along with experts at Virginia Tech and Virginia Cooperative Extension, that continue the work to make it what Payne calls “a perfect example of a great American success story.”

Barley. It’s been around for centuries, said Thomason.

“Go back 100 years, and almost everyone in this region who had any livestock to feed — and almost everyone did — grew some barley because it was relatively cheap feed,” he said. “That existed up until the 1970s and ’80s. At that point, we had so much vertical integration, there was less demand for a less expensive, on-farm feed.”

Despite the decline in barley acres, Virginia Tech made a conscious decision to maintain the barley breeding program. It remains one of the few east of the Mississippi.

“Sometimes it’s good to be one of the few that is working in a particular area … to be the ‘contrarian,’” Thomason said.

In the mid-’80s, the college hired a new small grain breeder to lead the program. He decided to increase the genetic diversity of the barley being grown, and one of the outcomes was the Thoroughbred seed. Its valued malting quality is due to one of its parents, a French-developed malt grain.

Fast forward to the mid-2000s, craft breweries and distilleries started popping up nationwide, and Virginia was no stranger to the trend. Brewers and distillers knew where to turn for high-quality, Virginia-grown barley. After their initial visit to Virginia Tech and conversation with Thomason back in 2018, so did Payne and Clear.

Payne’s Coalfield Strategies firm leads InvestSWVA, a public-private business attraction and marketing campaign for Southwest Virginia launched under the umbrella of the Virginia Tobacco Region Revitalization Commission and backed by private industry. Clear is the deputy director of the Virginia Department of Energy, a partner of InvestSWVA and Project Thoroughbred.

Always searching for economic development opportunities in Southwest Virginia, Clear and Payne were all ears when Thomason pitched specialty grains. They were sold, and thus Project Thoroughbred was born, named after the seed that spawned specialty barley in Virginia.

“Project Thoroughbred is about creating a specialty grain market in Southwest Virginia that ultimately delivers higher revenues to farmers and attracts next-generation farmers to the area,” Payne said. “We’re trying to be bold with this project, and it begins with the belief that Southwest Virginia produces the best malting quality grain in the world.”

Payne and Clear had found their target market in the craft beverage industry. Now, it was time to prove that the area had the land, resources, and willingness to grow specialty grains for craft breweries and distilleries.

Partners on the ground

Like the hundreds of Extension agents strategically located across the state, Amy Fannon is a wealth of knowledge.

Fannon is an Extension agent in Lee County, one of three counties in far Southwest Virginia that is currently growing malting-quality barley thanks to a combination of private dollars secured by InvestSWVA and a GO Virginia grant.

She has dabbled in the planting of specialty crops, such as pumpkins and hemp, and was more than open to trying something else.

Fannon has been instrumental in growing specialty grains and teaching other farmers how to, Thomason said.

“Amy had a very traditional hands-on Extension role there,” he said. “Farmers had grown barley 30 years ago, but they hadn’t grown any recently. It was a relearning and reteaching process.”

Thanks to the leadership and support of Fannon and dozens of other Extension agents, the project is headed toward a promising future.

“Amy provided the expertise and the credibility that we needed early on in this project,” Payne said. “The Extension agents, like Amy, have been our gateway to farmers in those counties who are willing to try something new. We rely on them heavily for their judgment.”

The first planting was in 2019 with two farmers and 24 acres. The project has focused on Violetta and Calypso barley varieties that are currently preferred by craft maltsters.

In 2021, Virginia Tech released Avalon, its first two-row, malt-type barley, making it easier for growers to reach quality specifications since it was selected specifically for Virginia growing conditions, Thomason said.

Now in the third year of the project, there are six farmers and 82 acres.

Seeing more and more farmers step up to the plate didn’t surprise Clear.

“The fact that these grains are a winter crop provides opportunities for revenue that our farmers have never seen before,” Clear said. “The money they can make off of this crop is way above anything else they’ve ever encountered in the winter.”

Asheville-based Riverbend Malt House co-founder Brent Manning is pictured using a traditional floor malting technique, which germinates the grains in a thin layer. The grain is manually raked and turned to keep the grains loose and aerated. Photo courtesy of Appalachian Grains.

Historically, the grain has been trucked to Louisville, Kentucky, for cleaning and bagging. From there, to Asheville, North Carolina, and Charlottesville, Virginia, for malting. Then, it’s been up to Payne and others involved with InvestSWVA to market it under the branded name of Appalachian Grains.

“We’ve estimated that Virginia breweries alone are importing 400,000 bushels a year from throughout the United States and Canada,” Payne said. “What we’re asking breweries and distilleries to do is change their buying habits. We have to convince them that we can deliver premier quality grain, and we’re able to, at the same time, deliver a product that’s locally sourced.”

So far, their efforts have paid off. In year one, 18,000 pounds of malt went to 18 breweries across the commonwealth. Some beer connoisseurs might recognize the names Hardywood, Smartmouth, and Three Notch’d. The recent additions of Devil’s Backbone and Michael Waltrip breweries upped the number of brewery partners to 20.

The malt even made an appearance at the governor’s inauguration earlier this year.

Despite Project Thoroughbred’s continued success, it cannot continue to grow without the removal of a glaring barrier, Clear said.

“Transportation costs,” he said. “It’s expensive, and from a food miles perspective, there’s no way the area can take advantage of this from a cost perspective.”

Unless, they decided, “We also build a grain terminal in Southwest Virginia.”

Craig Seaver can tell a good story. He is, after all, the former director of the Virginia State Parks System.

Seaver also is good at recognizing a valuable partnership when one comes along, and he did just that with Project Thoroughbred.

Seaver serves as the part-time project coordinator for the Lonesome Pine Regional Industrial Facilities Authority, or RIFA, which recently put a former coal tipple site in Norton, Virginia, along the rail line under option.

Perhaps the perfect site for a grain terminal?

The next phase of Project Thoroughbred is to build a grain terminal on this site in Norton, another far Southwest Virginia community looking to reinvigorate its economy, Seaver said.

Highlighting what Payne calls the “heart” of Project Thoroughbred – collaboration – students from nearby Mountain Empire Community College’s smart farming program will assist in operating the facility and learn the agribusiness and marketing side of grain production. Students have already visited farms with drones to estimate crop yields.

“The retention of young talent and young farmers is very important to this project,” Seaver said. “We believe engaging our youth in these early stages and exposing them to all facets of agriculture is key to keeping them here or attracting them to this area.”

The terminal is on track to be completed in 2023. The Lonesome Pine RIFA has secured $2.5 million from a U.S. Office of Surface Mining fund administered by the Virginia Department of Energy designed to help repurpose and diversify the economies of former mining communities. The Virginia Tobacco Region Revitalization Commission also has committed an additional $500,000 toward the construction of the grain terminal.

In the meantime, momentum continues for Project Thoroughbred, a bold endeavor in which all involved agree could not happen without a recipe full of knowledgeable, helpful, resourceful, and enthusiastic people.

“When you look at all of the partners, what it demonstrates is a real desire in the area to diversify our economy,” Clear said. “This is something people can get behind, and I think people here are hungry for new ideas.”