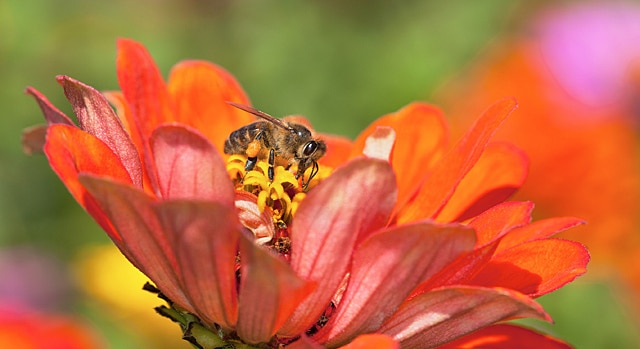 WASHINGTON — Honey bees could be intentionally bred to thrive on plants that are already locally present or even solely on artificial diets, according to a recent U.S. Department of Agriculture Agricultural Research Service (ARS) study.

ARS researchers found individual bees respond differently to the same diet and that there is a strong genetic component involved in how they respond to nutrition. This points directly to the concept that managed bees can be intentionally bred to do better on different diets, whether you are talking about an artificial diet or a diet based on specific plants already growing in an area, explained lead researcher Vincent A. Ricigliano. He is with the ARS Honey Bee Breeding, Genetics, and Physiology Research Laboratory in Baton Rouge, Louisiana.

“Urban development, modern agricultural systems and environmental alterations due to climate change, invasive plants, and even local landscaping preferences have all had a hand in regionalizing plants that dominate available pollen. It could potentially be more beneficial to tailor honey bees to do better on what is already available instead of working hard to fit the environment to the bees,” Ricigliano said.

The overall aim would be breeding to improve nutrient use by managed honey bees, like we have done for poultry and cattle breeding programs, Ricigliano explained.

“Now that we know there is room for genetic adaptation to diet, we could also look at breeding honey bees with improved nutrient efficiency or identifying genotype biomarkers that respond to various supplements to promote honey bee health,” he added.

In most commercial apiaries, honey bees do not have the opportunity to naturally breed to adapt to local conditions because commercial beekeepers typically replace the queen in each colony every year. The queen in a colony is the only bee that lays eggs to produce the next generation.

Beekeepers usually purchase new queens already inseminated from a handful of queen breeders in the United States. As a result, honey bees across the country generally have the same range of genes for nutritional responses without any specialized adaptation.

Honey bees have already been successfully bred for a very few selected traits, among them Varroa mite resistance. Varroa mites are among the single largest problem afflicting honey bees in the United States today.

“It was a little surprising to find when we started this study that, despite a sizable body of research pertaining to honey bee nutrition, relatively little is known about the effects of genetic variation on nutritional response,” Ricigliano said.

His next step is to refine knowledge about what genes control which nutrient and metabolic pathways and where the greatest amount of genetic variation exists so that breeding plans can be specific and scientifically guided.

Fall's a good time for a flower-bed makeover