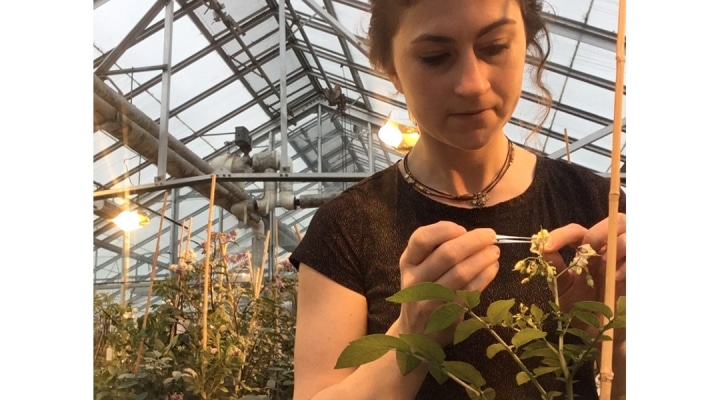 Study author Natalie Kaiser crossbreeding potatoes that have strong Colorado potato beetle resistance to potatoes with good tuber production in the greenhouse. She is using small forceps to select the male part of the flower, the anthers. (Natalie Kaiser)

But farmers growing potatoes face many challenges. One tiny, yet devastating, pest is the Colorado potato beetle. It can cause immense damage to potato crops. It’s also notorious for becoming resistant to chemical insecticides.

In a new study, published in Crop Science, researchers describe genetic tools to develop potato varieties with improved natural resistance to the potato bug. Crop Science is a publication of the Crop Science Society of America.

The Colorado potato beetle can devastate potato production. But some wild relatives of the domesticated potatoes have natural defenses against these beetles. These wild plants make their own beetle-killing compounds.

But consuming large amounts of these compounds can have adverse health effects in humans.

While beetles chomp on potato leaves, humans obviously do not. “So, it is desirable to create potato varieties that make these anti-beetle compounds only in their leaves,” says Kaiser, a researcher at Michigan State University.

But generating this beetle-resistant variety of potato has been a challenge of many layers.

One challenge is testing potato varieties for beetle resistance. Field trials can take months if not years. They can also be costly and resource intensive.

They compared the chemical profile of hundreds of individual potatoes with their resistance to the Colorado potato beetle in the field.

“We found chemical signatures that could predict resistance to Colorado potato beetles,” says Kaiser. “Breeders can select resistant potatoes with a simple chemical measurement instead of having to conduct field trials.”

This method could save time and money.

Another obstacle in breeding beetle resistant potatoes is the sheer amount of genetic information breeders need.

“There are several genes controlling the types and amounts of anti-beetle compounds that any given potato variety will produce,” says Kaiser. It is challenging to track all those genes during breeding.

Potato breeders also have to keep in mind other traits, like yields and tuber appearance.

“There are approximately 40 important traits to consider when developing a new potato variety,” says Kaiser. “Assembling the right combination of genes controlling all these traits is crucial.”

This process is complicated by the fact that potato varieties often have four copies of every gene. Potato isn’t the only crop to have multiple gene copies, which is called polyploidy.

Having four copies of each gene can make potato genetics complicated, according to Kaiser. “Each of the four copies can be a different version of the gene,” she says.

But many of diploid potato varieties are self-incompatible. “This means that a plant will not set fruit and seed when a flower is pollinated with its own pollen,” says Kaiser. This reproductive barrier makes breeding very challenging.

Researchers at Michigan State University are extending this research in field trials this summer. “We will screen new potato varieties for individuals that have good tuber characteristics along with beetle resistance,” says Kaiser.