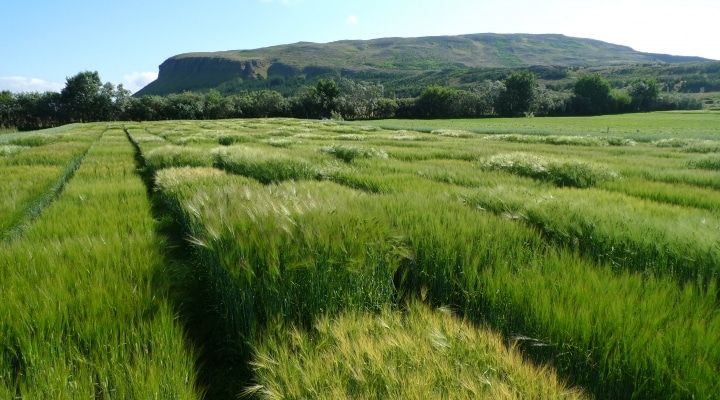 MADISON, Wis. — Climate change is a global issue. It affects our environment and our food supply.

Increasing temperatures, changing rainfall patterns, and extreme weather events influence crop yields and where crops can live. These events limit the number of crops humans can use.

Cereal crops, like wheat and barley, are important to human diets. They provide starch, protein, and fiber, and can be used in livestock feed.

But climate change has had a significant impact on cereal crops. Rising temperatures make it hard to grow these crops in their usual environments.

The team’s research was recently published in Crop Science, a journal of the Crop Science Society of America.

The team used barley from their breeding program adapted to conditions found in Iceland. These plants had been selected to reach maturity earlier compared to similar barley varieties from other regions.

“Climate affects barley production in Iceland,” explains Göransson. “In the fall, it is very cool and we have lots of storms.”

“Unfortunately, farmers see high seed loss with these storms,” Göransson explains. “If we can produce a crop that is ready to harvest earlier in the year, it will help avoid these issues.”

Despite these challenges, barley is the most reliable cereal crop in higher latitudes. To have a successful crop in the future, the plants need to mature earlier, have good straw quality, and be resistant to diseases.

“We wanted to know that the plants we selected for early maturity did well in a controlled environment,” says Göransson. “We used four different growth chambers with different day lengths and temperatures to recreate the environment in Iceland and compare with other climate conditions.”

Growth chambers are rooms in greenhouses where researchers can carefully control the environment the plants live in.

They observed day lengths from 12 hours to 20 hours, and temperatures of 50 to 68 degrees Fahrenheit. From these trials, they determined the effect on flowering time, time to maturity, and height of the new barley plants.

“Following our controlled studies, we found genetic markers associated with the traits we observed,” says Göransson. Genetic markers are segments of DNA that correspond with certain plant characteristics.

“Our goal was to find what genes are important for breeding the desired barley traits. From there, we can develop breeding tools to use in programs to precisely predict maturity,” says Göransson.

Their research uncovered information about the timing of maturity and plant height. It also gave insight on environmental factors and genetics in cereal crops.

“On a global scale, we have looked at many early barley varieties from gene banks and have not found anything that matures earlier in the cold Icelandic environment,” says Göransson.

“In warmer regions of the world, early maturity is a way to escape the summer heat,” he explains. “In the future, traits from the Icelandic barley could be used to breed other crops with improved performance in warmer climates.”

“This study showed how important it is to select crops for their environment,” says Göransson. “Crops perform differently in different locations. Our study can be used as a model for other cereal crops because they have similar genes. This will lead to greater success in breeding early maturing wheat as well as other crops.”

Magnus Göransson is a PhD student at the Department of Plant Sciences at the Norwegian University of Life Sciences. This research was supported by the Norwegian Genetic Resource Centre, the Research Council of Norway, and Graminor.

Reproductive management of cow herd during drought is vital