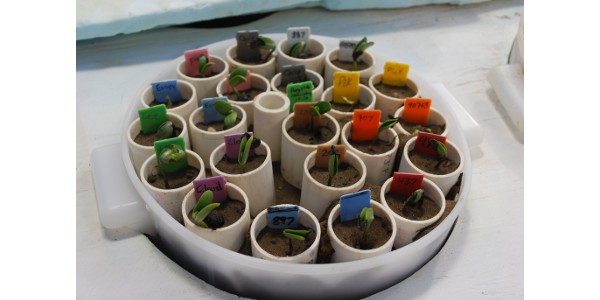 Checkoff-funded plant breeders are improving existing sources of genetic resistance to soybean cyst nematode – such as Peking and PI 437654 – and incorporating them into elite, high-yielding lines. (Photo courtesy of United Soybean Board)

WAUKESHA, Wis. — Soybean cyst nematode (SCN) causes the most yield loss of any soybean pathogen in North America, with economic impact in excess of $1 billion per year. That’s why soybean breeders funded by the checkoff (United Soybean Board and North Central Soybean Research Program) are improving and adding to current genetic sources of SCN resistance and breeding them into high-yielding backgrounds.

Like herbicide resistant weeds, the SCN organism evolves and adapts to eventually overcome the same source of genetic resistance deployed in a field year after year. Consequently, constant use of a single source of resistance (such as the PI 88788 source) will eventually wear thin, if not improved upon or rotated with other unique sources.

Expanding the sources of SCN resistance hasn’t always been easy. Public soybean breeders have spent years working with SCN resistance breeding lines other than PI 88788, which is the source of resistance used in 95 percent of commercially available SCN-resistant varieties. Unfortunately, breeding resistance genes from those other sources – such as PI 548402 (Peking), PI 90763 and PI 437654 (Hartwig) – into elite varieties has been challenging.

“With these unique resistance sources, you start with low-yielding backgrounds,” says Brian Diers, plant breeder at the University of Illinois Urbana-Champaign. “It takes time to breed resistance from these new sources into elite genetic backgrounds.”

Diers says that’s partly why the PI 88788 source of resistance has been over-used. “It’s worked really well, and breeders have been successful at incorporating it into high-yielding varieties. It’s been more difficult and taken longer to get yield parity with other sources of resistance, but we’re solving that problem.”

“But as you continue cycles of breeding, you are able to incorporate these genes more readily into elite, high-yielding lines. Breeders have been working on this for a long time,” Diers says. “Improved breeding technology is another factor. We have better genetic markers to select the genes we need, so we can develop varieties more quickly.”

Soybean growers, particularly in the Midwest, should be able to find more soybean varieties than ever with the Peking source of resistance. According to Diers, “If you can, rotate the sources of resistance you use. We have a large amount of evidence showing that this reduces selection pressure on SCN populations to continually adapt.”

Breeders at several universities have been developing cultivars with the PI 437654 resistance source. The first variety released with this source of resistance was Hartwig, which was released in 1992. Breeders have continued to breed with resistance from this source and are now obtaining good yields.

Not all PI 88788 varieties are created equal

Ideally, soybean growers in all regions will soon have choices of genetic resistance to SCN besides PI 88788. That’s one of the goals in the National Soybean Nematode Strategic Plan, a joint effort of the United Soybean Board and North Central Soybean Research Program.

The SCN Coalition is a public/checkoff/private partnership formed to increase the number of farmers who are actively managing SCN. Our goal is to increase soybean farmers’ profit potential and realize higher yields. Partners in The SCN Coalition include university scientists from 28 states and Ontario, grower checkoff organizations including the North Central Soybean Research Program, United Soybean Board and several state soybean promotion boards, and corporate partners including BASF, Bayer, Growmark, Nufarm, Syngenta and Winfield United.