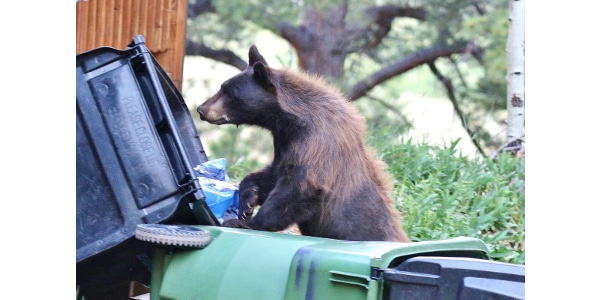 Thanks to a modernized tracking system these numbers provide a tremendous amount of insight on human-bear interactions. It is the agency’s hope that the release of this data serves as a wake-up call to Colorado residents. Concentrated, community-wide efforts must be made to live appropriately with bears in mind.

While the public and media tend to focus on the number of bears CPW has to put down – that number is only part of the overall story. In 2019, 92 bears were euthanized, or 1.7 percent of the year’s reported bear conflicts. While these numbers vary year over year, this data sheds a new light on the overall picture and how simple steps can be made throughout our communities to keep Colorado’s bears wild and alive.

The agency’s wildlife conflict data tracking system launched on April 1. It allows CPW to comprehensively track statewide reports ranging from simple sightings, to food source attractants provided, to property damage done by a bear, livestock depredation, aggressive behavior and more. As our ability to more efficiently and effectively track conflict data grows, we are committed to sharing this information to help all Coloradans understand our role in living with bears.

The data outlines a major problem and potentially documents only half of what actually takes place. CPW recognizes that among the 5,369 bear reports from April 1-Dec. 31, there are likely an equal number of human-bear interactions that go unreported.

The following sections break down the types of reports into categories and what each can mean to the well-being of Colorado’s bears, whose population is estimated between 17,000-20,000 (black bear is the only species in Colorado).

Trash – 1,728
One-third of all bear reports CPW received in 2019 involved trash. Trash is by far the leading cause of bear habituation, and open dumpsters or trash cans provide an all-you-can-eat buffet when left unsecured. Bears are highly intelligent and resourceful animals. Bears that find food around your home or in your community often lose their natural wariness of people. Once they find garbage, the next place they may look to for more food is inside your home.

Communities or HOA’s can help reduce human-bear conflicts and avoid attracting bears to your neighborhood or property by enacting a trash ordinance. Below is a list of known Colorado municipalities that have a bear-focused trash ordinance already in place (29).

Other municipalities in the process of developing trash ordinances for bear proofing include Idaho Springs, Gunnison and Lyons.

If you must leave trash outside, buy a bear-proof container/dumpster, build a bear-proof enclosure or install an electric fence. To avoid attracting bears, clean containers regularly with ammonia or bleach.

Bears want to get the most energy they can with the least amount of effort. Any type of bird feeder (hummingbird, suet and seed) you have out on your property, including those on upper levels, is about as easy of a meal that a bear can get.

Birdfeeders should not be placed outside from March through the end of November for any reason. Letting your bird feeders turn into bear feeders teaches bears that it’s safe to come close to people and homes looking for food. And for bears that can become a deadly lesson.

Other ways to attract birds to your property include placing a nesting box out, creating a bird garden, hanging flower pots or having a bird bath. Add brightly colored, trumpet shaped flowers around your home to attract hummingbirds, butterflies and a variety of beneficial insects. Water, especially running water, actually does a better job of attracting a wider variety of birds year-round than a bird feeder. Just keep your water sources smaller. Bears don’t sweat, so larger ponds and uncovered hot tubs can actually attract bears looking for a place to cool off.

Be responsible about attracting birds and you’ll be doing your part to keep bears wild.

Other Food Attractants – 1,171
Black bears are omnivores and will eat just about anything. Other major food sources we find around homes that attract bears include fruit trees, bee hives, chicken coops and livestock.

While fruit may be a part of a bears natural diet, that does not mean a bear should be gorging itself on your apple tree mere feet from where your kids play outside.

Additional food sources include pet food, BBQ grills, compost, livestock feed and fridges/freezers in your outer buildings. These items must always be cleaned up and/or properly secured.

Vehicle Break-Ins – 303
That equals 303 preventable occurrences if people had only kept anything with a scent out of their cars. Imagine the damage a bear would do inside your car, and the unwanted “present” it could leave behind.

Keep car doors and windows closed and locked if you park outside. Make sure there’s nothing with an odor in your vehicle, including candy, gum, air fresheners, trash, sunscreen, lotions and lip balms.

Dwelling Break-Ins (houses, cabins, garages) – 517
This number is certainly conservative as it does not include the many incidences where a bear was reported in a garage after the owner left it open, nor sheds that bears got into to get food. It only accounted for bears in homes, cabins or garages where there was forcible entry.

These numbers should highlight the elementary principles of locking the doors to your home, keeping your garage door closed and your windows closed and locked. Build bear unwelcome mats as a deterrent to place in areas a bear may want to access, replace exterior lever-style door handles with good quality round door knobs that bears can’t pull or push open, install sturdy gates or bars on lower level windows to help keep bears out. Screens don’t keep bears out.

The top five areas in Colorado with the most bear reported issues in rank order are: Area 8, Area 14, Area 2, Area 15 and Area 18. See the map below to see how we define our areas. 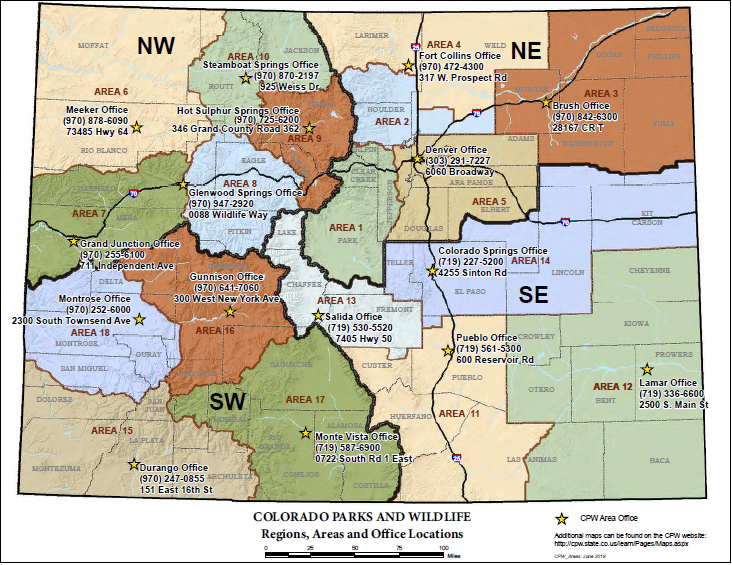 The adventures in vermicomposting

Senate defeats bill to expand ability to kill bears
May 23, 2019

Bear injured in summer fire now back in the wild
January 29, 2019