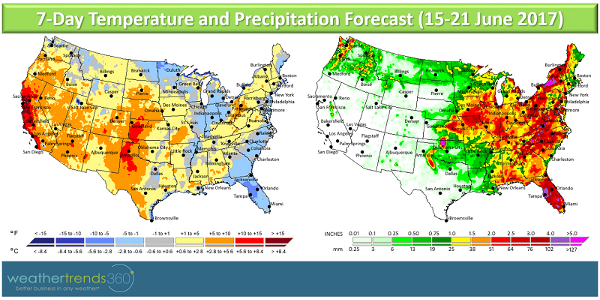 Trends are on track to be the warmest June 11th-17th in 26+ years for the Corn Belt.

The second full week of June has thus far yielded some needed rain across the Corn Belt. Even areas of the northern Plains, where drought conditions have recently been expanding, received about an inch of rain this week. However, when combined with very warm temperatures, this is on track to be the warmest June 11th-17th in 26+ years for the Corn Belt, a lot more moisture will be needed to restore soil moisture to “comfortable” levels in the northern Plains.

Intermittent showers and thunderstorms are in the forecast for the Corn Belt over the next week with precipitation more likely in the central and eastern portions of the Corn Belt, while areas that really need the rain in the western Corn Belt and northern Plains may miss out on the heavier precipitation. After a hot second week of June, temperatures will moderate in the Corn Belt during the third full week of June (18th-24th). However, another surge of hot weather is expected thereafter in the fourth week of June which could cause some issues for corn and soybeans, especially those that were planted in wet soils and may have a shallow root system as a result.

In the western U.S., following a particularly chilly start to the second week of June, which included snow in the higher elevations, the heat furnace is turning to full blast as temperatures soar into the 90s and even triple digits in places like Bakersfield, Fresno, and Sacramento, CA as well as Salt Lake City, UT and Boise, ID over the weekend and into next week. Temperatures should moderate by the end of June.

The tropics are starting to show some signs of life as there are 2 areas of possible storm development in the next 5 days. One area is located in the Gulf of Mexico, near the Yucatan Peninsula, and the other is far out in the Atlantic. Should a tropical system develop from either of these disturbances, there would be a threat of heavier rain, especially along the Gulf Coast, in the next week or 2.

South of the Equator, Brazil’s second corn crop is expected to reach a record production of 62.7 million tons this year. Unlike last year, when the weather caused severe damage to the crop and ultimately limited yields, conditions this year have been much more favorable for output. Harvest is still in its early stages (only 1% has been harvested in both Mato Grosso and Parana) domestic prices have already started to decline in response to the start of harvest. In the main corn-producing municipality, Sorriso, Mato Grosso, current prices are -63.8% lower than this time last year. As harvest picks up speed, many are worried about additional price declines.

These funny dads have the best advice

Pizzly bears exist — and they're more common than you might think
September 27, 2022