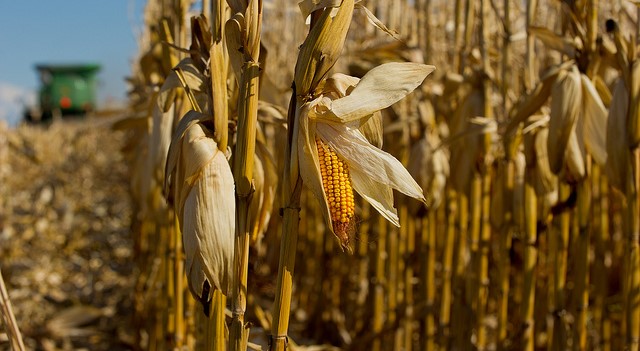 Mato Grosso, which is typically one of the first states to begin harvest, is about 80% complete. This is slightly slower than last year but in line with the state’s 5-year average pace. (United Soybean Board, Flickr/Creative Commons)

WASHINGTON — Although slightly slower than normal, and well behind last year’s pace, the harvest of Brazil’s safrinha corn crop has been making good progress thanks to drier weather. Last week, nation-wide harvest advanced 13% to push harvest near the half way completed mark. Average harvest is 55% complete by this time, and last year was about 63% complete. State-by-state progress varies wildly still. Mato Grosso, which is typically one of the first states to begin harvest, is about 80% complete. This is slightly slower than last year but in line with the state’s 5-year average pace. Further south, in the state of Parana, harvest is much more sluggish. Although it progressed nearly 14% last week, harvest in the state is only about a fifth of the way complete. Last year at this time, over half of the crop had already been harvested. Weather has been rather uncooperative for the crop in Parana this season.

Over the next 7 days in Brazil, conditions in Mato Grosso are forecast to remain mostly favorable for continued harvest. Minimal to no rainfall across much of the state, accompanied by generally warmer than normal temperatures will allow farmers to bring harvest closer to completion. Further south, however, in states such as Sao Paulo, Parana, and southern Mato Grosso do Sul, conditions over the next 7 days are expected to take a turn for the cooler and wetter. Although not every day will be rainy, the greatest chance for harvest-disrupting rains in this region is from Friday through Monday. Daytime highs through next Wednesday are expected to average about 5-10F below normal, while overnight lows only trend a few degrees F below normal. 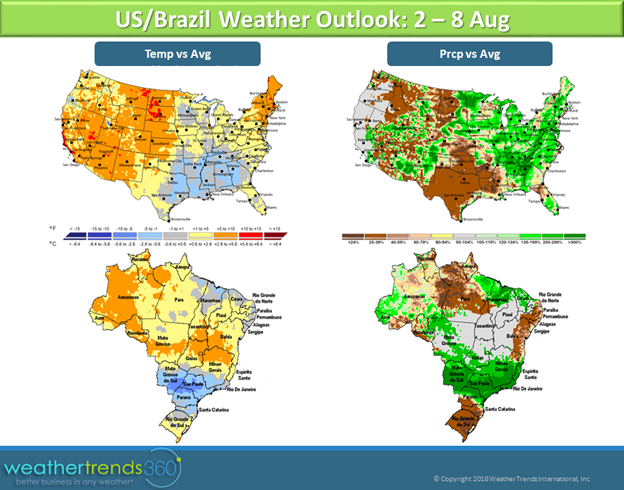 Back in the United States, cooler than normal temperatures will hang around the central US over the next couple days, however, over the weekend, warmer to much warmer than normal trends will start to push into the region from the west. The Dakotas to Kansas are expected to receive the heat first, with temperatures in the Dakotas trending as much as 10-15F above normal by the end of the week and into the weekend. These much warmer temperatures will stay mostly parked in the Plains into next week, but much of the central and eastern Corn Belt will trend closer to normal or only a few degrees above normal. The Northeast will remain generally warmer than normal into next week as well. In the Northwest, however, a brief cool down is in the forecast for the weekend. Cooler trends won’t stick around here long, and by late next week, temperatures well above normal could return to the region.

The week so far has been rather rainy for the Southeast, and showers are expected to continue for the next couple days. Conditions turn a little bit drier over the weekend and into early next week but somewhat hit or miss precipitation will dominate in the East next week. Some rain is also possible in the Upper Plains and Midwest over the weekend and into the beginning of next week. The South Central and Southwest will still trend on the dry side which could further deepen drought conditions.