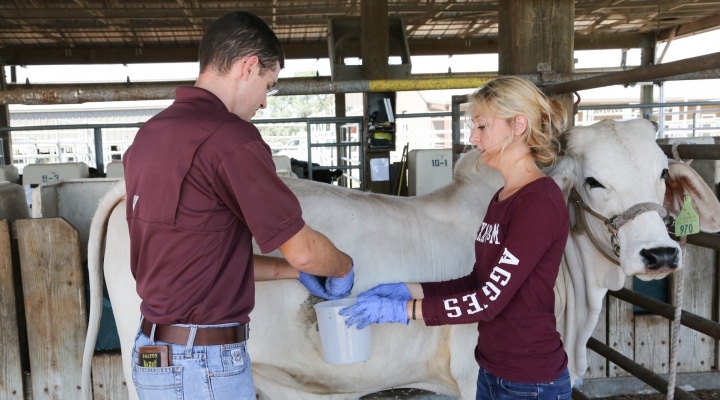 COLLEGE STATION, Texas — A recently funded Texas A&M AgriLife study will determine differences in nitrogen requirements between Brahman type cattle and other cattle. Measuring these differences may allow cattle producers to reduce the protein in cattle diets by allowing for precise diet formulations.

“Implementation of precision diet formulation in cattle diets can be the answer to producing a more affordable beef with a smaller environmental impact,” said Tryon Wickersham, Ph.D., Texas A&M AgriLife Research, scientist and associate professor in the Department of Animal Science in the Texas A&M College of Agriculture and Life Sciences.

“We believe development of feeding systems that account for differences in cattle type will reduce over and under supplementation, allowing us to optimize growth, reproduction and animal health outcomes,” Wickersham said. “Additionally, precise feeding systems will reduce the environmental footprint of beef production.”

“These cattle were selected under very different conditions and have developed the capacity to thrive under different conditions,” Wickersham said. “These adaptations affect the way they perform and have not been well accounted for in current beef cattle feeding systems, increasing the environmental and economic cost associated with beef production.”

Wickersham’s study is designed to address the relationship between urea recycling, microbial nitrogen capture and supplementation strategies in both types of cattle consuming low-quality forage.

“Cattle provide a valuable service to society by converting low-quality sources of nutrients such as grasses, crop residues and byproducts into beef, which is a high-quality source of amino acids, minerals and vitamins,” Wickersham said.

“However, there is room to improve the efficiency of this conversion to reduce the environmental effects of beef production and increase consumer access to these vital nutrients,” he said, “thus allowing more people to consume a diet meeting their requirements.”

“We believe reducing the over provision of protein by 10% potentially reduces nitrogen excretion from cattle by approximately 22 pounds per head per year or 704 million pounds for the U.S. beef industry per year,” Wickersham said. “The potential savings, on a soybean meal-equivalent basis, is $1.4 billion per year.”

Wickersham’s latest research project, supported by an almost $500,000 grant from the U.S. Department of Agriculture National Institute for Food and Agriculture, is titled “Enhancing sustainability of beef production by elucidating subspecies differences in urea recycling in response to supplementation.”

“We are doing this research because improper supplementation to cattle has environmental and economic cost, which ultimately decreases the affordability of beef for consumers,” Wickersham said.

The role of supplements and their effects

Growth, reproduction and health of cattle are affected by the grass and hay they consume — and at times supplements are provided to improve their ability to thrive on their diets, he said.

“Supplements are expensive and represent an increased use of nutrients,” Wickersham said. “By developing feeding systems that account for differences in cattle type, we can reduce the effects of cattle production without compromising the animal’s nutritional status.”

Completion of the proposed project will provide data allowing for precise delivery of supplemental nitrogen for cattle grazing low-quality forage across a wide array of production systems, he said. Capturing data in both subspecies enhances the global utility of these projects for meeting the increasing demand for animal proteins.

Wickersham chose to address the problem of over and underfeeding of protein in cattle diets by elucidating the differences in nitrogen utilization and recycling to improve the capacity to describe urea recycling and microbial capture of recycled nitrogen, both essential to precision diet formulation.

“Ultimately, we believe precision diet formulation will reduce both overfeeding and underfeeding of nitrogen and increase the environmental, economic and social sustainability of beef production,” Wickersham said.

Editorial: Victory in the courts for Texas property owners