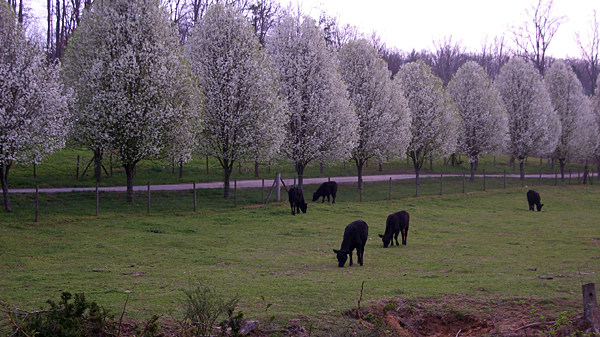 One of the biggest issues with the Bradford cultivar of the Callery pear is the way the branches grow upright, with narrow branch angles that are weak and brittle. (Wikimedia Commons)

GOSHEN, Ind. — Chances are, you or a neighbor have a Bradford pear in your lawn. They have been a staple in the landscape for years. People like their pretty white flowers early in the spring, glossy foliage in the summer and their scarlet fall colored leaves. They grow under a wide variety of conditions and tolerate city conditions well. Add to that the trees are relatively disease and insect free, and you have what might be considered the perfect tree for the landscape, right?

Turns out, beauty is only skin deep. One of the biggest issues with the Bradford cultivar of the Callery pear is the way the branches grow upright, with narrow branch angles that are weak and brittle. Because of this architecture, Bradfords have developed a reputation of being a tree that frequently breaks or splits away at the trunk or major limbs.

Plant breeders, of course, set to work to rectify this situation, creating new ornamental pear cultivars such as Aristocrat, Redspire and Whitehouse, all of which have improved limb structure. Problem solved, right?

Unfortunately, no. You see, another advantage that the Bradford pear had that many of us did not appreciate until recently is that they were self-sterile. In other words, they could not pollenate themselves, and therefore, the fruit they produced did not produce little baby trees.

Enter the new cultivars, and the situation has changed. There is just enough genetic variation between the Bradfords and these new cultivars that they can pollenate each other. The result: hundreds of new wild “volunteer” pear trees popping up where pear trees have not been planted. Birds, it seem, love these little fruits and are depositing seeds everywhere they poop, particularly along fencerows and the edges of woodlands. The visual effect will be very pronounced in a few days when the white flowers begin to blossom.

What can you do as the owner of ornamental pear trees? Keep a close watch for fruit set. Remove seedling trees immediately or keep them mowed very low to prevent flowering and fruiting. If your existing landscape specimens bare fruit this year, you can spray fruit inhibitor hormone (e.g. ethephon, Florel Fruit Inhibitor) to reduce fruit set. Note that timing and thorough coverage is critical, the spray must be applied when plants are in early stage of full bloom, before fruit sets. Typically ornamental pear is in bloom for 10 – 14 days. It will be difficult to provide thorough coverage on larger specimens.

Bradford pears typically do not last long in the landscape, frequently breaking up in high winds and storms. When you have a damaged Bradford, you might consider tree removal, especially for trees that are already in decline or are young enough to easily remove and replace with more appropriate species.

Bradford pear is not the only escapee from local landscapes that is causing issues. Burning bush, honeysuckle, some of the bittersweets and loosestrifes and several ornamental grasses are showing up in unmanaged area such as woodlands, fence rows and railroad right of ways. Before you plant, please check to see if the plants you are considering have invasive potential. For a look at some of the worst offenders, check out https://goo.gl/iJRe9b.