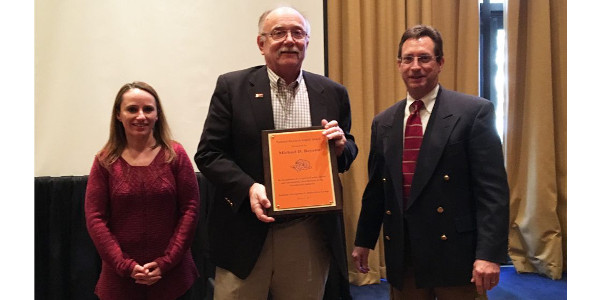 RALEIGH — Mike Boyette, Philip Morris Professor of Biological and Agricultural Engineering, recently received a National Research Impact Award at the annual meeting of the southern region of the American Society for Horticultural Science and the horticulture section of the Southern Association of Agricultural Scientists.

The National Sweetpotato Collaborators Group (a subset of the American Society of Horticultural Science) presented him the award for his career achievements in sweet potato research. One of his current projects, which evaluates the shape and size of sweet potatoes using laser image analysis, is featured in this video:

An expert in crop processing, Boyette has conducted research and Extension work in the harvesting and postharvest handling of tobacco and fresh fruit and vegetables. He led multi-state efforts in the on-farm baling of tobacco during 1995-98, which was estimated to save the industry in excess of $25 million per year.

In 1999-2000, he was the lead researcher in another multi-state effort to retrofit tobacco curing barns to reduce the production of tobacco specific nitrosamines (TSNAs) during the curing process. TSNAs are known carcinogens that form during the curing of the tobacco. Due to the efforts of Boyette’s team, the levels of TSNAs in those states were reduced by more than 92 percent the first year.

Boyette earned all three of his degrees from NC State: bachelor’s and doctoral degrees in biological and agricultural engineering, and a master’s degree in wood and paper science. He was named a Philip Morris Professor of Biological and Agricultural Engineering in 1999.