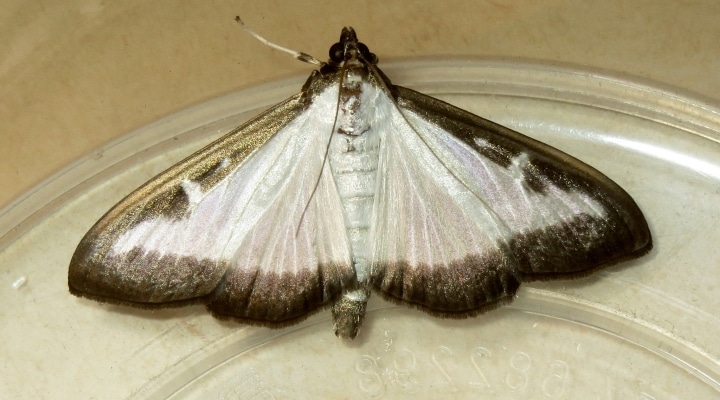 Box tree moth, Cydalima perspectalis, is native to Asia. It was introduced into Europe in 2007 and quickly spread across the continent. Box tree moth was introduced to Ontario, Canada in 2018 which was the first introduction to North America. (photo by David Short, creative commons/flickr.com)

RALEIGH, N.C. — Box tree moth, Cydalima perspectalis, is native to Asia. It was introduced into Europe in 2007 and quickly spread across the continent. Box tree moth was introduced to Ontario, Canada in 2018 which was the first introduction to North America.

In May 2021, box tree moth was found in Connecticut, Massachusetts, Michigan, New York, Ohio, Tennessee, and South Carolina. It arrived on plants from Ontario. Nurseries or retail outlets that received boxwoods (Buxus spp.), Euonymus, or hollies (Illex) from Canada should scout for eggs, larvae, pupae, and adults.

USDA APHIS is taking steps to trace the infested plants and determine the extent of the introduction and begin eradication protocols. Importation of boxwood, holly, euonymus, and other hosts from Canada have been halted by federal order.

Box tree moths are up to 4 cm and have two color morphs. The morph seen in Canada has white wings with brown borders. The brown morph also found in Europe is almost entirely dark brown with characteristic white specks on the forewings. Males can be monitored with pheromone traps. Caterpillars are up to 2 cm and yellow to lime green with dark stripes. They eat boxwood leaves and bark and can quickly defoliate and even kill large hedges. Caterpillars also create unsightly webbing and frass within plants which protects them from predators and could reduce insecticide efficacy.

Public garden personnel, landscape and nursery professionals, extension personnel, diagnosticians, and the public need to be aware of this new pest and look for it. A scouting guide is available to help identify box tree moth life stages. Box tree moth pheromone lures and traps are commercially available. It would be valuable to monitor with these for early detection.

There have not been experiments to document insecticide efficacy for this pest in the US. In Europe and Canada, many insecticides are not permitted for use on ornamental plants. A fact sheet is available listing insecticides labeled for caterpillars in nursery and landscape ornamentals.