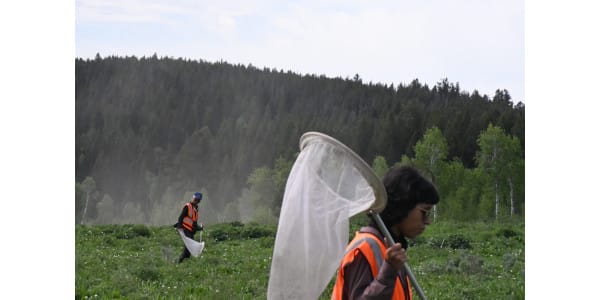 FORT COLLINS, Colo. — There’s a debate in the scientific community about the terms citizen science and community science. Some scientists have asked whether the term “citizen” is a barrier to inclusion, since many organizations have rebranded programs as “community science.”

Citizen scientists are overwhelmingly white adults, with above-median incomes and with a college degree. In other words, citizen science is not truly open and available to all members of society, particularly those who are underrepresented in scientific organizations.

But a group of scientists – including Colorado State University Associate Professor Gillian Bowser – said that choosing between these terms is not the most important topic for discussion. What’s more important, she said, is broadening participation in citizen science.

The team outlined its take on this topic in a new policy paper published online in Science on June 24. Caren Cooper, associate professor of forestry and environmental resources at North Carolina State University, is the first author of the paper.

Bowser said citizen science, an activity where people who aren’t experts collect data and ask questions, isn’t a commonly used or understood term for people outside of academia.

“Opening up the field of science to new audiences by allowing them to participate in the process is really important,” she said. “That’s what we are doing with our students, helping them figure out the questions they should ask and learning about the scientific process.”

A dramatic increase in students’ ability to become scientists

CSU could serve as a model for other universities looking to broaden participation for students.

Bowser, a scientist in the Department of Ecosystem Science and Sustainability, has led fieldwork projects for students during the summer for the last 12 years. She has guided teams on a BioBlitz, where researchers, students and citizen scientists visit a national park and count as many species as possible in 24 hours.

She has secured funding for these activities from the National Science Foundation. This includes a partnership with the CSU-led Colorado-Wyoming Alliance for Minority Participation, comprised of more than a dozen higher education organizations.

“We work primarily in national parks,” Bowser explained. “We don’t need or use expensive equipment; students can use cell phones. Their innate ability to become scientists has dramatically changed in the last five years with new technology.”

Students are passionate about saving the environment and climate change, which means they don’t have to be sold on becoming citizen scientists.

“They’re there, and we just have to open the doors and let them in,” Bowser said.

From a science perspective, Bowser sees this as the “democratization” of science.

She is currently leading a new project in partnership with the National Park Service to look at ways to understand pollinator decline potentially caused by climate change in national parks and protected areas. The public science project engages park staff and visitors to document pollinators – bumble bees and butterflies – using citizen science tools.

Her team hopes to educate the public on the importance of pollinators in parks and protected areas through this work, which requires grassroots efforts to document these small insects in urban and remote parks.

‘We can make a difference’

The Warner Colleges of Natural Resources, where Bowser is based, has stepped up to broaden participation in science by bringing in more diverse students, including a new graduate teaching assistant, Katiana Garcia, who is from Puerto Rico.

Bowser said Dean John Hayes and her department head, Rich Conant, made a commitment to make this happen.

“As a university, we can make a difference,” she said. “Our departments are serious about diversity and inclusion in natural resources, and we are implementing our goals across the board with graduate and undergraduate students.”